Sexology
Issue: Sep, 1965
Posted in: Ahead of its time, Sexuality
Tags: censorship
2 Comments on FROM THE EDITOR’S Scrapbook (Sep, 1965) 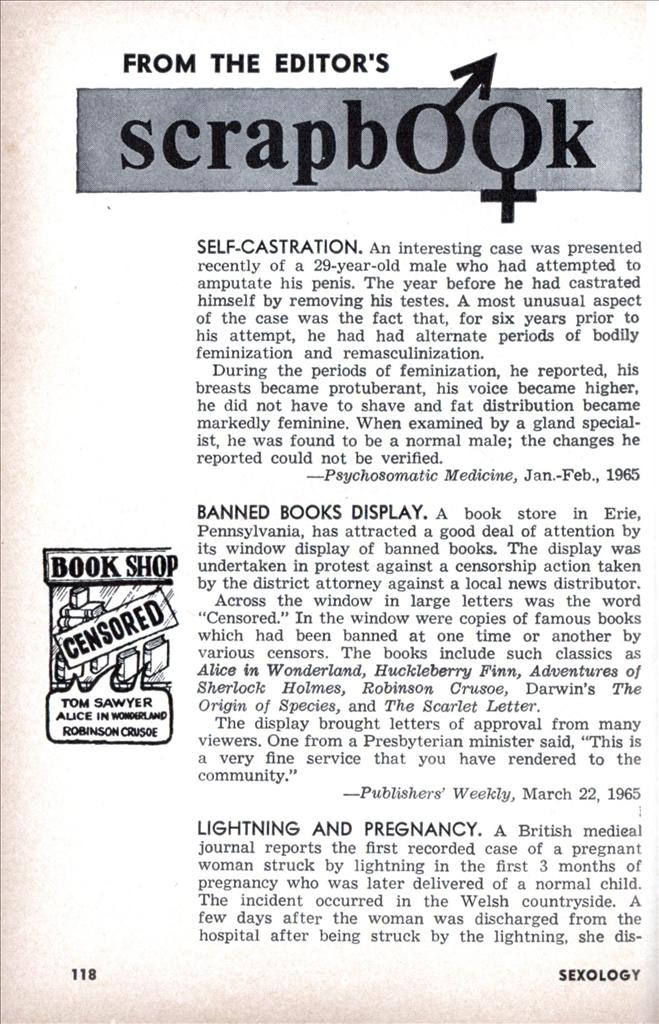 FROM THE EDITOR’S Scrapbook

SELF-CASTRATION. An interesting case was presented recently of a 29-year-old male who had attempted to amputate his penis. The year before he had castrated himself by removing his testes. A most unusual aspect of the case was the fact that, for six years prior to his attempt, he had had alternate periods of bodily feminization and remasculinization.

During the periods of feminization, he reported, his breasts became protuberant, his voice became higher, he did not have to shave and fat distribution became markedly feminine. When examined by a gland specialist, he was found to be a normal male; the changes he reported could not be verified.

BANNED BOOKS DISPLAY. A book store in Erie, Pennsylvania, has attracted a good deal of attention by its window display of banned books. The display was undertaken in protest against a censorship action taken by the district attorney against a local news distributor.

Across the window in large letters was the word “Censored.” In the window were copies of famous books which had been banned at one time or another by various censors. The books include such classics as Alice in Wonderland, Huckleberry Finn, Adventures of Sherlock Holmes, Robinson Crusoe, Darwin’s The Origin of Species, and The Scarlet Letter.

The display brought letters of approval from many viewers. One from a Presbyterian minister said, “This is a very fine service that you have rendered to the community.”

LIGHTNING AND PREGNANCY. A British medical journal reports the first recorded case of a pregnant woman struck by lightning in the first 3 months of pregnancy who was later delivered of a normal child. The incident occurred in the Welsh countryside. A few days after the woman was discharged from the hospital after being struck by the lightning, she dis- covered to her great anxiety that she was pregnant. However, the pregnancy was normal. Some cases have been recorded where abortions occurred following electric shock in the early months of pregnancy.

NEEDED: A NEW DEFINITION OF OBSCENITY.

According to New York Baptist minister Howard Moody, we need a new definition of obscenity. Most people think of the so-called vulgar four-letter words as being most obscene, he said. Actually, “it is not the vulgar utterance from our lips, but our deeds that truly profane human life.”

Writing in Christianity and Crisis, the Rev. Moody declared that true obscenity “is that material, whether sexual or not, that has as its basic motivation and purpose the degradation, debasement, and dehumanizing of persons.” “The dirtiest word in the English language,” he added, “is ‘Nigger’ from the sneering lips of a Bull Connor.”

SEX ON THE CAMPUS. In spite of popular opinion and books like Sex and the College Girl, sexual freedom has not swept the American campus. A careful study of an Eastern women’s college has just concluded that at least three-quarters of the unmarried girls were virgins; premarital intercourse was restricted to future husbands; and only a very small percentage were promiscuous. The study was conducted over a 4-year period by Dr. Mervin B. Freedman, now an assistant dean at Stanford University.

Dr. Freedman believes that “the Puritan heritage has by no means passed from the American scene.” Although he did find that college girls were more liberal in their attitudes, he felt that the incidence of non-virginity among college women has increased little since the 1930’s. The great change has been in freedom of attitude and petting.

Attitudes changed considerably during the college period, with the seniors being far more liberal in their ideas. Among the students who had engaged in intercourse, the predominant attitude was one of enjoyment and satisfaction, particularly where the partners were men with whom they shared a close emotional relationship. The pattern of sexual behavior that has evolved on the campus apparently consists of petting, intercourse among some engaged couples and early marriage.

WHAT IS NORMAL? According to Dr. Wardell B. Pomeroy, a co-author of the Kinsey reports now doing counseling in New York, it would be easier to banish the word “normal” from our vocabulary than to answer the question. The answer, he says, depends entirely on what definition of “normal” you want to use. When we call someone “abnormal,” we may mean that he is statistically abnormal (like a 7-footer in an average-sized crowd), or that he is immoral or wrong (from a religious point of view), or that he is doing something harmful (from a social point of view), or that he is doing something against the law.

Says Pomeroy, “Our concern should be with individual well-being rather than with irrelevant, illogical and psychologically damaging labeling of sexual behavior as normal and abnormal.”

SOCIAL WORK EXPERIMENT. A six-year experimental study to determine whether social work services could prevent delinquency has found that these services are almost completely ineffective. In the study, 400 problem girls in a New York City vocational high school were selected and divided into 2 groups. One group got special assistance—individually and in group therapy—from professional social case workers; the other got no special help at all. The results—measured by such things as the number of school drop-outs, unwed pregnancies, conduct marks, etc.—showed virtually no appreciable differences between the groups that got help and those that didn’t.

The study did, however, turn up a number of interesting findings. The workers were surprised to learn the extent to which these girls were in need of sexual information. One major theme that turned up in group discussions was the girls’ distress over sexual problems, menstruating, intercourse, pregnancy and childbirth. Many of them thought menstruation was a punishment because Adam and Eve had sinned. “When the workers gave group instruction on sexual matters,” the report states, “the girls expressed great relief. Frequently they said or implied that the opportunity to get this kind of information as members of a group was perhaps the main reason they valued the experience.”

One implication of the study was that, if personal behavior was to be changed, it might be necessary to change the social conditions in which persons lived and that a broad social perspective is needed.