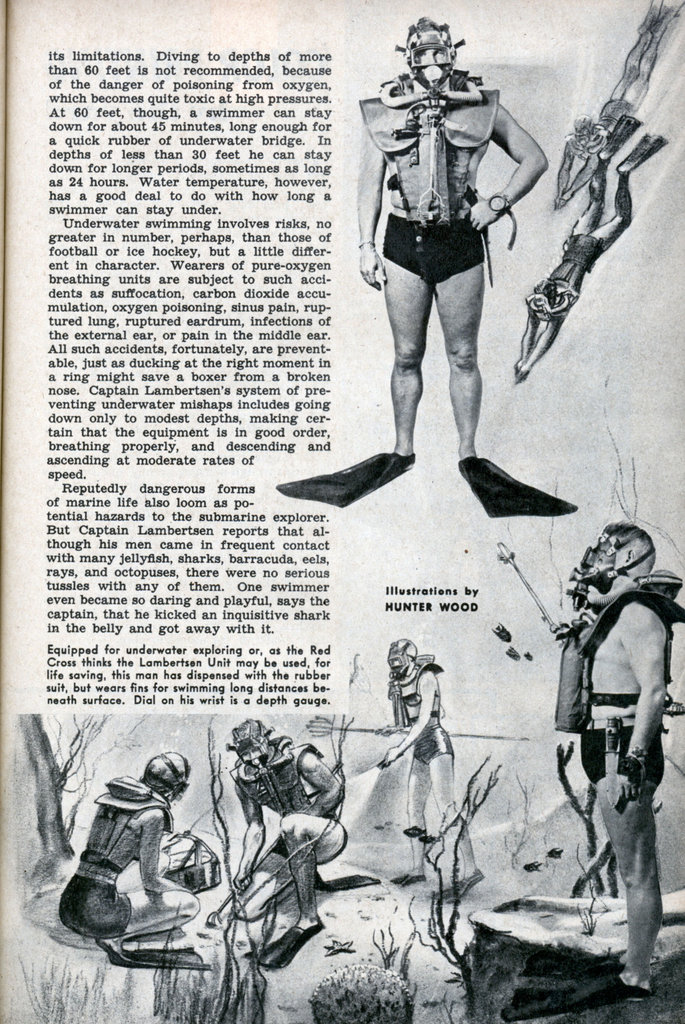 OUT of the wealth of atom bombs, flame throwers, booby traps, and other World War II inventions, have come some devices that promise to survive and become indispensable in peace. Among them are oxygen-charged respiratory units, perfected for the Army and Navy for underwater offensives against the enemy. Like DDT and the jeep, these breathing machines will be of service to anyone who learns to use them.

Several such breathing devices cropped up during the war. One of them, the Lambert-sen Unit,was invented in 1940 by a mechan- , ically-inclined medical student, Christopher Lambertsen, who designed it originally as an appliance to help him become a better swimmer. Once he had tried his device successfully in the water several times, he decided that he had something more than merely a swimming aid, so he trudged to Washington and offered it to the Navy. After thinking about it and testing it, the Navy filed his idea and apparently forgot it. But two years later, the invention was rescued from the files and turned over to the Office of Strategic Services, which was then being organized.

Lambertsen received a commission in the Army Medical Corps, was assigned to the OSS, and was asked to muzzle his invention so that it wouldn’t give off any telltale air bubbles. At the time, that was a problem comparable to stopping soda pop from fizzing. But by introducing a canister of special soda lime, which absorbed carbon dioxide and sent the rest of the swimmer’s exhalations along through the system to be used over again, Lambertsen made a “non-effervescing” rebreather. The improved device was accepted by the OSS for its special. underwater squad of “frog men,” a name coined by the British to describe their underwater warriors (PSM, Dec. ’45, p. 121). Lambertsen, then a captain, joined the frog squad as an instructor.

In its comparatively brief Army career, the unit was successfully employed by the frog men in a number of various activities, both in and out of water, including salvage operations, damage control on shipboard, some underwater attacks on enemy shipping, beach reconnaissance, underwater demolition work, and repair and inspection of docks and ships’ bottoms. Now, with its war mission honorably completed, the Lambertsen Unit gives promise of becoming more popular and more practicable, according to its enthusiastic inventor.

Commercially, says Captain Lambertsen, it can be used in mine rescue work, fire fighting, rescue of persons from burning planes, buses and trains; and for damage control in smoke-filled or flooded ships’ compartments. Furthermore, it can be used for quick salvage of planes sunk in less than 100 feet of water. Boat owners will probably find the unit invaluable in recovering lost anchors, straightening out lines that have become fouled about propellers, and replacing or inspecting mooring buoys.

But users of the Lambertsen Unit will also be able to create new water sports and introduce both good and poor swimmers to a new and fanciful realm.

The Lambertsen unit, however, does have its limitations. Diving to depths of more than 60 feet is not recommended, because of the danger of poisoning from oxygen, which becomes quite toxic at high pressures.

Underwater swimming involves risks, no greater in number, perhaps, than those of football or ice hockey, but a little different in character. Wearers of pure-oxygen breathing units are subject to such accidents as suffocation, carbon dioxide accumulation, oxygen poisoning, sinus pain, ruptured lung, ruptured eardrum, infections of the external ear, or pain in the middle ear. All such accidents, fortunately, are preventable, just as ducking at the right moment in a ring might save a boxer from a broken nose. Captain Lambertsen’s system of preventing underwater mishaps includes going down only to modest depths, making certain that the equipment is in good order, breathing properly, and descending and ascending at moderate rates of speed.

Reputedly dangerous forms of marine life also loom as potential hazards to the submarine explorer. But Captain Lambertsen reports that although his men came in frequent contact with many jellyfish, sharks, barracuda, eels, rays, and octopuses, there were no serious tussles with any of them. One swimmer even became so daring and playful, says the captain, that he kicked an inquisitive shark in the belly and got away with it.