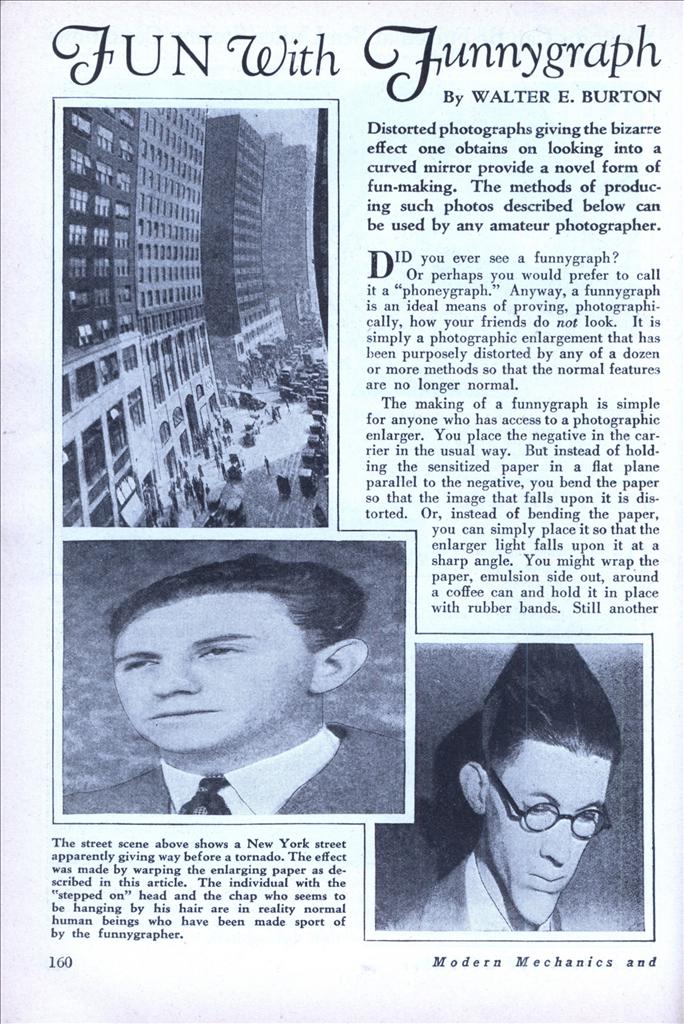 Distorted photographs giving the bizarre effect one obtains on looking into a curved mirror provide a novel form of fun-making. The methods of producing such photos described below can be used by any amateur photographer.

DID you ever see a funnygraph? Or perhaps you would prefer to call it a “phoneygraph.” Anyway, a funnygraph is an ideal means of proving, photographically, how your friends do not look. It is simply a photographic enlargement that has been purposely distorted by any of a dozen or more methods so that the normal features are no longer normal.

The making of a funnygraph is simple for anyone who has access to a photographic enlarger. You place the negative in the carrier in the usual way. But instead of holding the sensitized paper in a flat plane parallel to the negative, you bend the paper so that the image that falls upon it is distorted. Or, instead of bending the paper, you can simply place it so that the enlarger light falls upon it at a sharp angle. You might wrap the paper, emulsion side out, around a coffee can and hold it in place with rubber bands. Still another method is to bend the sheet into any of a hundred different forms, holding it in place on the enlarging easel with pins or thumb tacks..

In focusing the image of the negative, you will have to employ slightly different tactics than with a flat paper surface. Because of the tilting or curving of the paper, some parts of the image will be slightly out of focus when other parts are sharp. With the enlarger lens at its largest stop, focus so that the image is sharply defined midway between the nearest and farthest portions of the paper. With portraits, the eyes should be sharpest. Then stop the lens down as far as possible. This, of course, will require a longer exposure than when a larger stop is used. The enlargement is developed and fixed in the usual way.

“What’s the use of a funnygraph?” you may ask.

Well, that depends largely upon your taste or requirements. Perhaps you are looking for an unusual way to brighten your album. A few distorted pictures will do it, especially if some of those to whom you show your collection are honored by “likenesses” of themselves. Or you may have a store and wish to attract the attention of window shoppers who are bored with familiar things. Wouldn’t a few lopsided enlargements of the town’s principal buildings, streets and perhaps officials attract at- tention if displayed under the title “Suppose an Earthquake Visited Us?”

Or maybe you want to liven up a party with some funnygraphs of those attending. A certain camera club, at its recent annual banquet, had an “exhibition” of prints distorted by the method described. It was the feature of the party. Funnygraphs make good place cards, if you have photos of all the guests at your disposal. And it’s hard to beat them as comic Valentines!