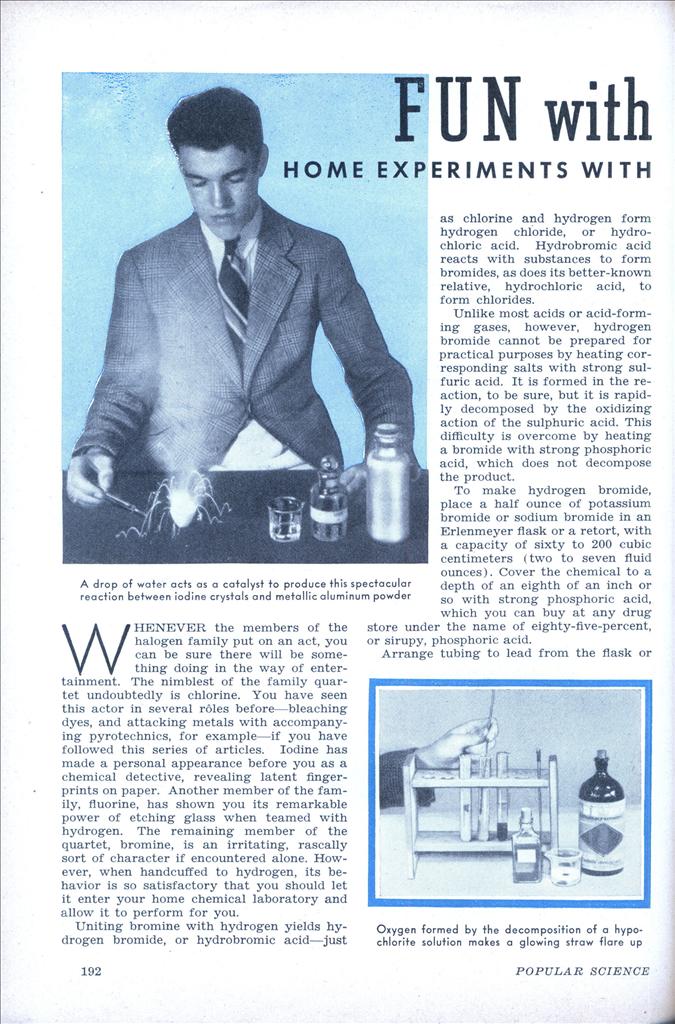 FUN with the HALOGENS

WHENEVER the members of the halogen family put on an act, you can be sure there will be something doing in the way of entertainment. The nimblest of the family quartet undoubtedly is chlorine. You have seen this actor in several roles beforeâ€”bleaching dyes, and attacking metals with accompanying pyrotechnics, for exampleâ€”if you have followed this series of articles. Iodine has made a personal appearance before you as a chemical detective, revealing latent fingerprints on paper. Another member of the family, fluorine, has shown you its remarkable power of etching glass when teamed with hydrogen. The remaining member of the quartet, bromine, is an irritating, rascally sort of character if encountered alone. However, when handcuffed to hydrogen, its behavior is so satisfactory that you should let it enter your home chemical laboratory and allow it to perform for you.

Unlike most acids or acid-forming gases, however, hydrogen bromide cannot be prepared for practical purposes by heating corresponding salts with strong sulfuric acid. It is formed in the reaction, to be sure, but it is rapidly decomposed by the oxidizing action of the sulphuric acid. This difficulty is overcome by heating a bromide with strong phosphoric acid, which does not decompose the product.

To make hydrogen bromide, place a half ounce of potassium bromide or sodium bromide in an Erlenmeyer flask or a retort, with a capacity of sixty to 200 cubic centimeters (two to seven fluid ounces). Cover the chemical to a depth of an eighth of an inch or so with strong phosphoric acid, which you can buy at any drug store under the name of eighty-five-percent, or sirupy, phosphoric acid.

Arrange tubing to lead from the flask or retort to the bottom of an empty side-necked test tube, which will serve as a catch bottle to condense water vapor distilled from the phosphoric acid. At the test tube’s side neck, attach more tubing that will conduct the hydrogen bromide vapor to the bottom of a test tube for collecting the gas. This test tube may be left open, and the gas, being heavier than air, will displace it and fill the tube.

Apply heat to the flask or retort, with a Bunsen burner, and hydrogen bromide gas will be generated. It will pass through the system into the last test tube. Meanwhile a teaspoonful or so of useless condensate will collect in the side-necked test tube.

Collect a tubeful of hydrogen bromide gas and then pour it, as if it were water, into the air. A white cloud forms as the gas combines with moisture in the air.

Hold an object moistened with ammonium hydroxide (household ammonia may be used) in the stream of hydrogen bromide gas from your apparatus. Dense white clouds of ammonium bromide will be formed. This resembles the formation of similar clouds of ammonium chloride, when hydrogen chloride (hydrochloric acid gas) comes in contact with ammonia.

If hydrogen bromide is heated, it decomposes into its constituents, hydrogen and bromine. To show this, soak a sheet of filter paper in an alcoholic solution of fluorescein, and dry it. Then dampen the yellow-stained paper with water and wad it into the mouth of a test tube filled with hydrogen bromide gas. Hold the test tube in a Bunsen flame. The heat will release free bromine, which will change the hue of the paper to a reddish coloration. The bromine reacts with the fluorescein to form eosin, a red dye. This test for free bromine can also be adapted to tell whether a salt is a bromide. Usually it is sufficient to heat the salt with strong sulphuric acid, in a test tube plugged with the fluorescein test paper as before. If the salt is a bromide, hydrogen bromide will be formed and the sulphuric acid will decompose it, releasing free bromine and turning the paper pink or red.

This solution of hydrobromic acid, you will find, has distinctly acid properties. In fact, it is strong enough to dissolve metals such as zinc and magnesium. Drop small quantities of these metals into portions of the liquid, and hydrogen gas will be evolved. The metal itself is converted into a bromide salt.

With iodine, another member of the halogen family, you can carry out a mysterious and spectacular experiment. This test calls for solid iodine crystals (not the liquid “tincture of iodine” used as an antiseptic, which is a solution of the crystals in alcohol) and should be performed outdoors.

Mix a quantity of the iodine crystals with about twice their volume of metallic aluminum powder, such as is used in aluminum paint, by thorough stirring in a bone-dry porcelain crucible or tin-can lid. So far, no reaction has taken place. Now add a drop of water to the mixture. In several seconds, when the water wets the aluminum metal, things commence to happen.

The iodine-aluminum mixture becomes warm. Suddenly it glows with a soft, red hue. Purple fumes of iodine vapor issue from the mass. (It is to dissipate these fumes that the experiment is performed outdoors.) While the vapor is being emitted, the mixture will continue to glow. Then, as it starts to cool, the dying glow of the aluminum oxideâ€”formed when the aluminum burns in the airâ€”is spontaneously rekindled to brightness. This phenomenon is known as “recalescence.” Finally a cold, twisted residue is left.

Curiously, the drop of water took no chemical part in the reaction; it simply acted as a catalyst or “trigger” to set things going. No one seems to know just how or why a catalyst works. But in some mysterious way it makes certain chemicals interact, simply by its presence.

Here is an experiment with another compound of the halogen familyâ€”a hypochlorite â€”which shows that two catalysts are sometimes better than one.

For the hypochlorite used in this test, you can make a solution of calcium hypochlorite by dissolving (Continued on page 230) about ten grams (two teaspoonfuls) of bleaching powder in 100 cubic centimeters (three and a half fluid ounces) of water, and filtering to obtain a clear solution. Or you can use the straight, undiluted solution of sodium hypochlorite sold under various trade names at drug and grocery stores, for bleaching and for whitening clothes.

Soon you will see gas bubbles forming in the third tube, containing both copper sulphate and iron sulphate, although there will be practically no evolution of gas in the two other tubes. The gas is formed by the decomposition of the hypochlorite solution. Insert a glowing straw in the third test tube, and it will flare up and burn with a vivid light, showing that the gas is oxygen. Here is an instance in which two substances, neither of which could be considered a catalyst alone, do a nice bit of teamwork as catalysts when placed together.