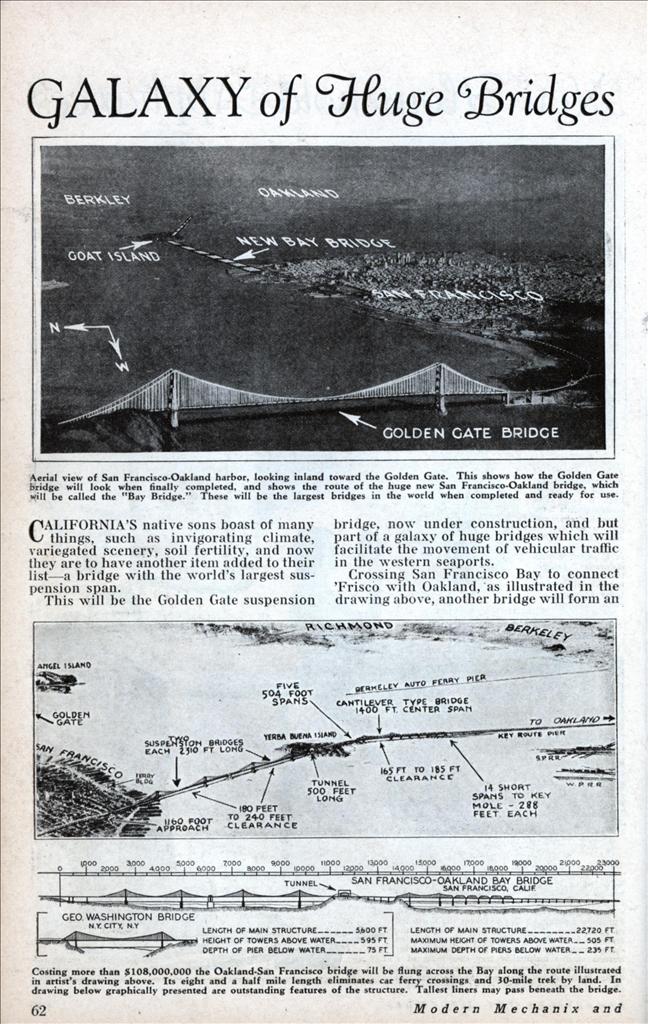 CALIFORNIA’S native sons boast of many tilings, such as invigorating climate, variegated scenery, soil fertility, and now they are to have another item added to their listâ€”a bridge with the world’s largest suspension span.

This will be the Golden Gate suspension bridge, now under construction, anil but part of a galaxy of huge bridges which will facilitate the movement of vehicular traffic in the western seaports.

Crossing San Francisco Bay to connect ‘Frisco with Oakland, as illustrated in the drawing above, another bridge will form an automobile and train straightaway down the Pacific Coastâ€”the San Francisco-Oakland “Bay Bridge.”

Heretofore autos and trains have been compelled to cross the bay by ferry, or take a circuitous 30 mile trek skirting the water’s edge. The bridge cuts the journey from thirty miles to slightly over eight.

Costing, roughly, $108,000,000 the Oakland-San Francisco link will originate at a pier near the foot of Market Street, cross to Verba Buena, or Goat Island, which will be tunneled, and thence to a long fill extending out into the bay from Oakland side.

Including the main approaches, the bridge will be slightly more than eight miles in length. In mid-channel, on the Oakland side, engineers will raise a veritable island of concrete and steel to serve as the main anchorage of the structure.

Massive proportion of the structure may be perceived from the following interesting features of the bridge: The two main cables of the bridge will be over three feet in diameter, 7,6(50 feet long, and they will be woven of 27,572 separate strands of wire.

The largest of the huge cantilever spans penetrates 256 feet below the surface of the water, the equivalent in height of a 23-story building, and towers 300 feet above water.

To resist wind and earth forces the bridge is being built to allow a sway of 13 feet, and yet sustain a peak load capacity of 430,000,000 pounds.

New Yorkers who view the George Washington Bridge with awe are given something really huge to talk about when it is realized that the Frisco bridge is four times and a half as long as the span bridged on the Hudson by the Washington structure.

The size of the caissons which must be built and sunk to enable piers to be built has called forth one of the most novel engineering proposals of recent yearsâ€”still another bridge, a “Walking Bridge” if you pleaseâ€”which will walk to the location with the caisson and there accurately sink it upon the exact spot required.

Caissons are an essential impedimenta to bridge building of this type, and they are hard to handle in tide rips or rivers which have currents. M. Clemients, French engineer of Paris, has proposed a mobile structure which could pick up the caisson and either by walking with it, or on caterpillar treads, move to the spot desired to muck the caisson in.