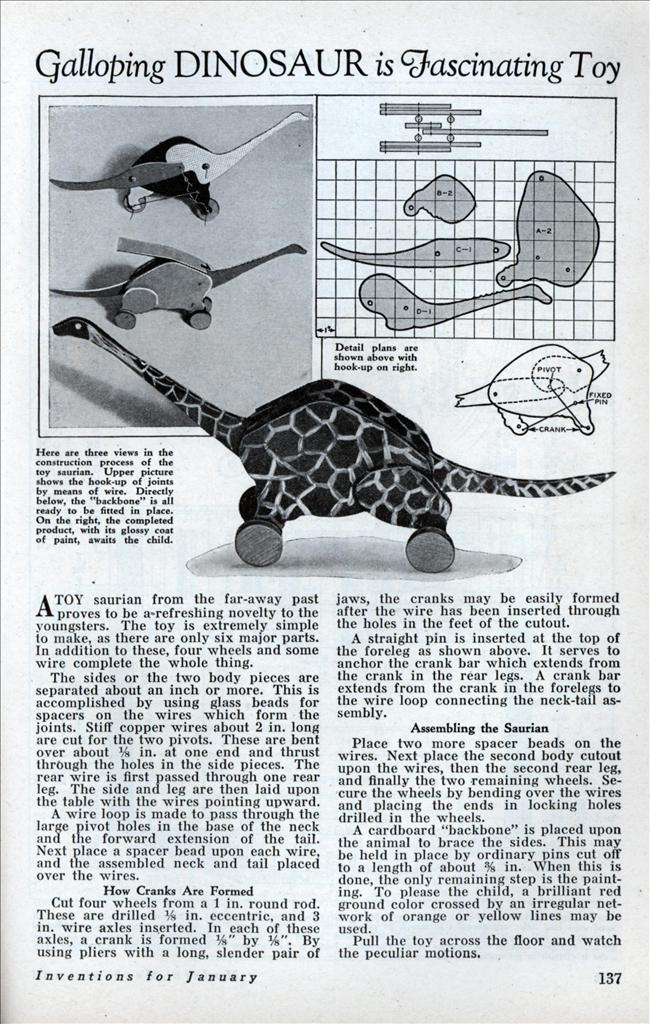 A TOY saurian from the far-away past proves to be a refreshing novelty to the youngsters. The toy is extremely simple to make, as there are only six major parts. In addition to these, four wheels and some wire complete the whole thing.

The sides or the two body pieces are separated about an inch or more. This is accomplished by using glass beads for spacers on the wires which form the joints. Stiff copper wires about 2 in. long are cut for the two pivots. These are bent over about % in. at one end and thrust through the holes in the side pieces. The rear wire is first passed through one rear leg. The side and leg are then laid upon the table with the wires pointing upward.

A wire loop is made to pass through the large pivot holes in the base of the neck and the forward extension of the tail. Next place a spacer bead upon each wire, and the assembled neck and tail placed over the wires.

How Cranks Are Formed

Cut four wheels from a 1 in. round rod. These are drilled 1/8 in. eccentric, and 3 in. wire axles inserted. In each of these axles, a crank is formed 1/8″ by 1/8″. By using pliers with a long, slender pair of jaws, the cranks may be easily formed after the wire has been inserted through the holes in the feet of the cutout.

Place two more spacer beads on the wires. Next place the second body cutout upon the wires, then the second rear leg, and finally the two remaining wheels. Secure the wheels by bending over the wires and placing the ends in locking holes drilled in the wheels.

A cardboard “backbone” is placed upon the animal to brace the sides. This may be held in place by ordinary pins cut off to a length of about % in. When this is done, the only remaining step is the painting. To please the child, a brilliant red ground color crossed by an irregular network of orange or yellow lines may be used.

Pull the toy across the floor and watch the peculiar motions.