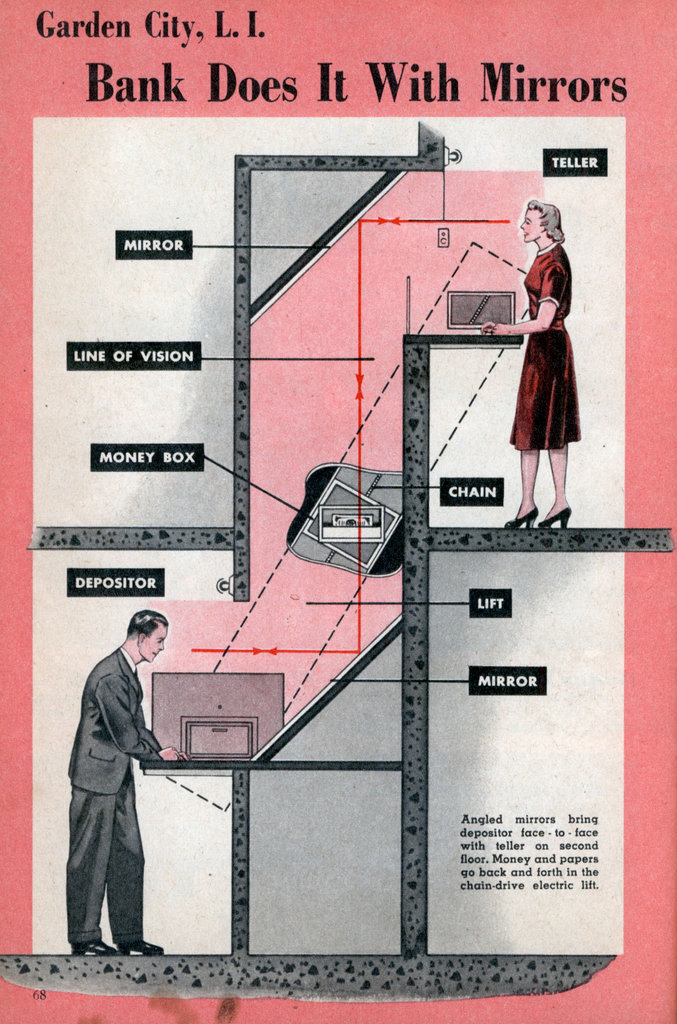 Garden City, L. I. Bank Does It With Mirrors

THE submarine periscope has gone into the banking business. It’s all done with mirrors, as a look into the Garden City Bank and Trust Company of Garden City, L. I., would show you.

To save valuable space on the ground floor, the bank set up its note department on the second floor. Patrons, however, still do their banking on the main floor, thanks to a periscope channel built into the wall. The patron simply walks over to the table at the base of the periscope channel and sees the teller in the large 45-degree-angle mirror before him. Both teller and patron discuss the business at hand just as if they were facing each other through a cash window, since normal tones carry clearly up and down the channel.

The teller upstairs pushes a button near the top opening of the chain-drive elevator and, presto! the money box flies up the shaft to her. She handles the patron’s business as usual, then returns the receipts or money down the elevator.

The idea for this novel banking by mirrors goes back to the wartime shipbuilding boom at Portsmouth, Va. Frank Lawrence, president of the American National Bank there, had to handle in his modest-sized bank millions of dollars every week in shipbuilders’ paychecks.

He filled up all his ground-floor space with teller windows, but still the bank’s customers queued up like movie fans on Saturday night and even jammed the sidewalk. After working out a unique solution with A. Stanley Miller and Sons, a father-son architectural firm, Lawrence gave his bank customers a cash window right on the curb.

The customer drives up to the side of the bank, then, without getting out of his car, presses a button for his curb-service banking. The teller is actually down in the basement, but the customer sees her reflection face-to-face through a mirrored passage similar to the one shown here.

A. Stanley Miller, Jr., of Mineola, L. I., who helped his father plan the Portsmouth cash-on-the-curb system, adopted the mirror idea for the Garden City Bank, where the customer comes inside the bank but has to deal with the teller upstairs.

Not only does banking with mirrors save the feet and the bank’s space, but it makes the cash cage safer, for even big-time bandits haven’t learned how to shoot around corners. Mirrors thus are making banking easier for everybody but the bank robber. One problem, however, is still tough: How are you going to dig up enough green stuff to keep the money box full? You still can’t do that with mirrors.