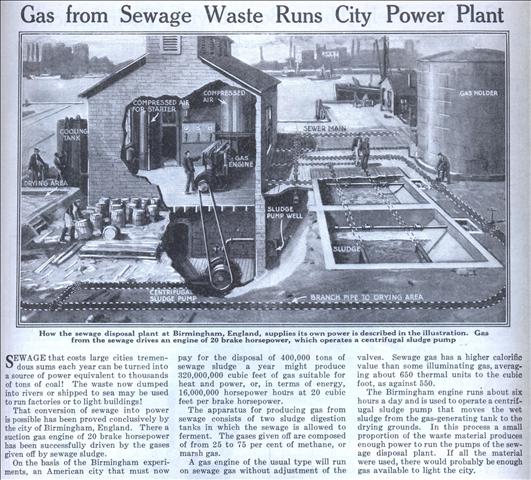 SEWAGE that costs large cities tremendous sums each year can be turned into a source of power equivalent to thousands of tons of coal! The waste now dumped into rivers or shipped to sea may be used to run factories or to light buildings!

That conversion of sewage into power is possible has been proved conclusively by the city of Birmingham, England. There a suction gas engine of 20 brake horsepower has been successfully driven by the gases given off by sewage sludge.

On the basis of the Birmingham experiments, an American city that must now pay for the disposal of 400,000 tons of sewage sludge a year might produce 320,000,000 cubic feet of gas suitable for heat and power, or, in terms of energy, 16,000,000 horsepower hours at 20 cubic feet per brake horsepower.

The apparatus for producing gas from sewage consists of two sludge digestion tanks in which the sewage is allowed to ferment. The gases given off are composed of from 25 to 75 per cent of methane, or marsh gas.

A gas engine of the usual type will run on sewage gas without adjustment of the valves. Sewage gas has a higher calorific value than some illuminating gas, averaging about 650 thermal units to the cubic foot, as against 550.

The Birmingham engine runs about six hours a day and is used to operate a centrifugal sludge pump that moves the wet sludge from the gas-generating tank to the drying grounds. In this process a small proportion of the waste material produces enough power to run the pumps of the sewage disposal plant. If all the material were used, there would probably be enough gas available to light the city.