I’m not sure what’s scarier, the picture of children in gas masks, or the horse wearing one.
And I love that they insist that being exposed to mustard gas is really no worse then getting a bad sun burn. 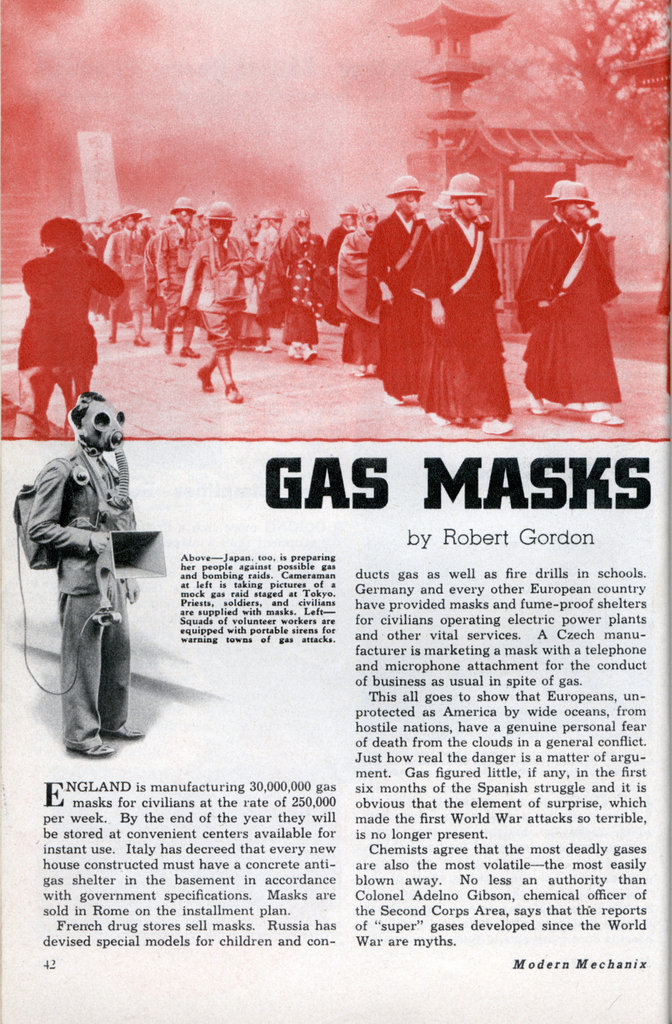 GAS MASKS FOR ALL

ENGLAND is manufacturing 30,000,000 gas masks for civilians at the rate of 250,000 per week. By the end of the year they will be stored at convenient centers available for instant use. Italy has decreed that every new house constructed must have a concrete anti-gas shelter in the basement in accordance with government specifications. Masks are sold in Rome on the installment plan.

French drug stores sell masks. Russia has devised special models for children and conducts gas as well as fire drills in schools. Germany and every other European country have provided masks and fume-proof shelters for civilians operating electric power plants and other vital services. A Czech manufacturer is marketing a mask with a telephone and microphone attachment for the conduct of business as usual in spite of gas.

This all goes to show that Europeans, unprotected as America by wide oceans, from hostile nations, have a genuine personal fear of death from the clouds in a general conflict. Just how real the danger is a matter of argument. Gas figured little, if any, in the first six months of the Spanish struggle and it is obvious that the element of surprise, which made the first World War attacks so terrible, is no longer present.

Chemists agree that the most deadly gases are also the most volatileâ€”the most easily blown away. No less an authority than Colonel Adelno Gibson, chemical officer of the Second Corps Area, says that the reports of “super” gases developed since the World War are myths.

The possibility of civilians losing morale and being thrown into a panic by gas, however, is everywhere recognized. It is to guard against this that the British have set up an Air Raid Precautions Department as part of the Home Office. In Germany, the National Air Safety League with the slogan “Save Yourself” has distributed 7,500,000 masks to its members. Its most popular model is one selling for $6. The British civilian mask costs the government but two shillings.

What all mititary men know, but what many civilians do not understand, is that the object of an air raid over a large city is to create panic, to cause enough cessation of industry and commerce that armies cannot be supplied, and to so weaken the will of the populace that they will demand peace on any terms without waiting for a decision to be won by their army on the field of battle. Death and property damage are not the end in itself.

The possibilities of destruction by aerial bombing have been greatly exaggerated. During the last nine months of the World War, for instance, according to official figures published in the Coast Artillery Journal, more than 400 planes took off to bomb Paris. Over half of these planes were brought down before they reached their objective. Those that did release their bombs took a toll of roughly 400 killed and 1,400 wounded. Since then, however, the speed of bombing planes has doubled, their range has been increased five times, and the pay load five times on the most modern types. The largest aerial fleet in existence is the Russian, with 7,000 planes, approximately half of which are bombers.

If we grant that the destructive effect of bombers has increased five times, without any increase in the effectiveness of defensive measures, it would mean that the largest possible raid on a European city would cause about 8,000 deaths and 28,000 wounded. This is a frightful toll, but it is a far cry from the horror pictures so frequently painted, in which a city such as London is wiped out in a few minutes.

But we cannot ignore the rapid development of defensive measures. All European countries today have elaborate defensive zones, bristling with hundreds of searchlights, sound locators, anti-aircraft guns, and airdromes for fast climbing interceptor planes, all conne