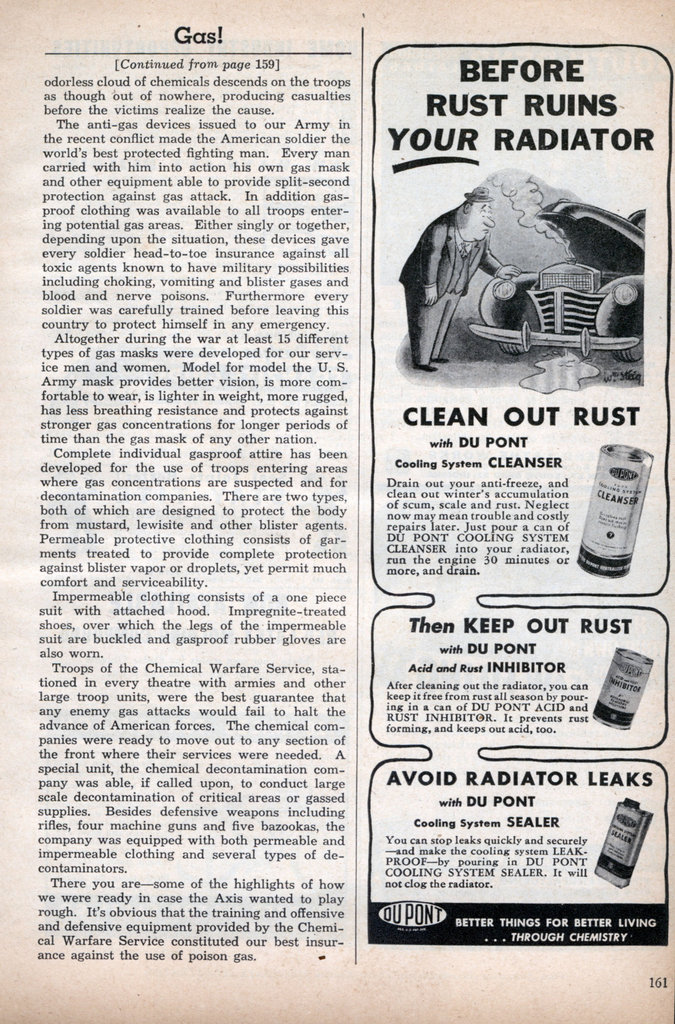 America was ready to give and take if the Axis had turned loose with the most inhumane of all modern weapons!

LOOK carefully at the pictures on these pagesâ€”if you’ve been wondering what we would have done in case the Axis powers had introduced deadly chemicals in the recent war.

It seems fantastic, weird and remote, now that the shooting is over. But here are the brutal facts, revealed for the first time by the Army’s Chemical Warfare Service. It was alert and ready to retaliate in heaping measure had our enemies used gas. Although the U. S. is not a party to any treaty or other agreement not to use gas, we have long been committed to the policy that we would not resort to this horrible weapon unless it was first employed by our foes. The fact that our troops were fully prepared for offensive and defensive gas warfare undoubtedly stopped the Axis from challenging us on this score.

Chemical mortar battalions in every combat theatre, having won their spurs by firing smoke and high explosive barrages from their chemical mortars, immediately could have turned to toxic agents for which this death-dealing weapon originally was developed. At the same time every active front had decontamination companies available for neutralizing gassed areas; processing companies for analyzing enemy chemical agents on the spot; maintenance companies to reservice gas masks and other equipment, and depot companies ready to supply gas munitions. By the same token, chemical air operations companies, which had been busy storing and loading incendiary bombs and filling airplane spray tanks with smoke mixture, speedily could have switched to preparing gas for release from the air. Huge storage depots maintained by the Chemical Warfare Service in this country and abroad were stocked with enough bulk chemicals and gas-filled bombs, grenades and shells for large-scale gas offensives. Four secret arsenals and other special plants, having produced an enormous reserve of toxic agents, stood by for additional production if needed.

Ready for use were various types of war gases, ideal for special purposes. Included were casualty producers which blister, choke and poison the blood and nerves and harassing agents which cause tears and nausea. The blister agents include mustard, a dark oily liquid with an onion odor, which vaporizes when released and contaminates the ground for days and even weeks; lewisite, with geranium smell and similar characteristics; and the new nitrogen-mustards which, being odorless, can be detected only with special devices. These chemicals in gas or liquid form, attack the lungs, produce blisters on unprotected skin and also injure the eyes. Because of their persistency they are mainly useful in making areas impassable.

In the choking gas group are phosgene, diphos-gene, producing colorless vapors with the odor of musty hay; and chloropicrin, a yellow gas smelling like flypaper that also irritates the eyes. They are especially useful for offense.

Among the blood and nerve poisons are arsine and hydrocyanic acid, colorless, the former with a faint aroma of phosphorus and the latter having an almond smell. These are killers.

In the non-fatal or harassing category are chloracetophenone which, though having the scent of apple blossoms, irritates the eyes, nose and skin, as does brombenzylcyanide. Adamsite and diphenylchlorarsine are irritant smokes, the former with a slight tinge of coal smoke and the latter remindful of shoe polish.

Toxic gas concentrations can be laid down by a variety of methods. The major gas weapons of the Chemical Warfare Service were chemical mortars, artillery shells, bombs, spray tanks, irritant candles, and hand grenades. The chemical mortar (4.2 inch) is a 300-pound rifled weapon which fires twenty shells a minute, each weighing 25 pounds at ranges up to two and a half miles. A chemical battalion armed with these “goon guns” can lay down three tons of phosgene in a minute. Of the artillery shells the 75 mm. howitzer, 105 mm. howitzer, 155 mm. gun and various infantry mortars can all fire toxic agents.

Low-flying attack planes coming in at treetop level can spray hundreds of men within seconds before protective measures can be taken. Another method has been worked out by which highflying bombers, almost invisible in the sky, can release their burden of toxic vapor thousands of feet in the air, without the knowledge of troops below. Minutes later the invisible and practically odorless cloud of chemicals descends on the troops as though out of nowhere, producing casualties before the victims realize the cause.

The anti-gas devices issued to our Army in the recent conflict made the American soldier the world’s best protected fighting man. Every man carried with him into action his own gas mask and other equipment able to provide split-second protection against gas attack. In addition gasproof clothing was available to all troops entering potential gas areas. Either singly or together, depending upon the situation, these devices gave every soldier head-to-toe insurance against all toxic agents known to have military possibilities including choking, vomiting and blister gases and blood and nerve poisons. Furthermore every soldier was carefully trained before leaving this country to protect himself in any emergency.

Altogether during the war at least 15 different types of gas masks were developed for our service men and women. Model for model the U. S. Army mask provides better vision, is more comfortable to wear, is lighter in weight, more rugged, has less breathing resistance and protects against stronger gas concentrations for longer periods of time than the gas mask of any other nation.

Complete individual gasproof attire has been developed for the use of troops entering areas where gas concentrations are suspected and for decontamination companies. There are two types, both of which are designed to protect the body from mustard, lewisite and other blister agents. Permeable protective clothing consists of garments treated to provide complete protection against blister vapor or droplets, yet permit much comfort and serviceability.

Impermeable clothing consists of a one piece suit with attached hood. Impregnite-treated shoes, over which the legs of the impermeable suit are buckled and gasproof rubber gloves are also worn.

Troops of the Chemical Warfare Service, stationed in every theatre with armies and other large troop units, were the best guarantee that any enemy gas attacks would fail to halt the advance of American forces. The chemical companies were ready to move out to any section of the front where their services were needed. A special unit, the chemical decontamination company was able, if called upon, to conduct large scale decontamination of critical areas or gassed supplies. Besides defensive weapons including rifles, four machine guns and five bazookas, the company was equipped with both permeable and impermeable clothing and several types of de-contaminators.

There you areâ€”some of the highlights of how we were ready in case the Axis wanted to play rough. It’s obvious that the training and offensive and defensive equipment provided by the Chemical Warfare Service constituted our best insurance against the use of poison gas.