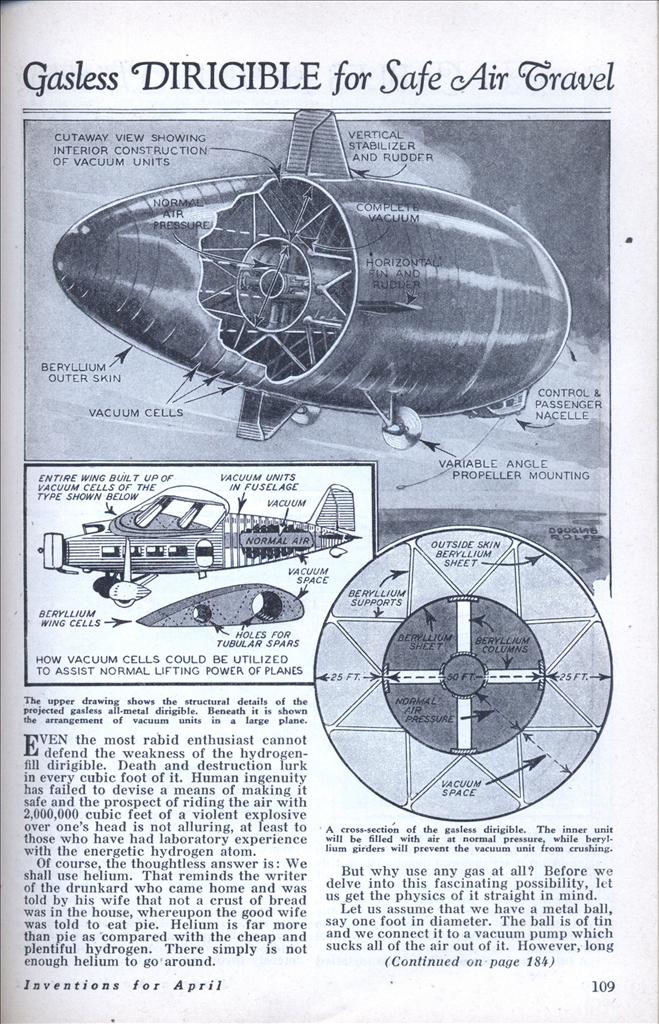 EVEN the most rabid enthusiast cannot defend the weakness of the hydrogen-fill dirigible. Death and destruction lurk in every cubic foot of it. Human ingenuity has failed to devise a means of making it safe and the prospect of riding the air with 2,000,000 cubic feet of a violent explosive over one’s head is not alluring, at least to those who have had laboratory experience with the energetic hydrogen atom.

Of course, the thoughtless answer is: We shall use helium. That reminds the writer of the drunkard who came home and was told by his wife that not a crust of bread was in the house, whereupon the good wife was told to eat pie. Helium is far more than pie as compared with the cheap and plentiful hydrogen. There simply is not enough helium to go around.

But why use any gas at all? Before we delve into this fascinating possibility, let us get the physics of it straight in mind.

Let us assume that we have a metal ball, say one foot in diameter. The ball is of tin and we connect it to a vacuum pump which sucks all of the air out of it. However, long before we can do this, something very terrible happens to the tin ball.

When a certain and critical point is reached in the evacuation, an apparently invisible force crushes our tin can and it takes on an appearance very similar to a derby hat that has been sat upon by the heavy man from the circus. The atmospheric pressure on the outside of the can does this; a pressure that, in the case of a very high vacuum, reaches 14.7 pounds per square inch. So far, we do not have a very cheerful prospect Action of a Hollow Ball But what would happen if we had a metal ball that would be able to withstand this pressure? The metal ball would float; it would have a great buoyancy, greater by far than it would have if it were filled with helium or hydrogen.

Of course, in assuming this, we must keep in mind the fact the metal ball would have to be very light and very strong. If we had a metal that would meet these specifications, we could have an all-metal, gasless air machine.

We cannot turn to aluminum or any of its alloys because they are too heavy. The thinnest and best steels are also ruled out but our search would eventually lead us to a comparatively unknown member of the metal family. It is called beryllium and we may expect many wonderful things of it.

Today beryllium is in the same commercial position that aluminum was in before the masterful researches of Charles Hall. But beryllium is a far more wonderful metal than aluminum; it has one-third the weight of aluminum and many times its tensil strength. It is hard, non-corrosive and one of the best behaved members of the whole metal family. Although it is not as plentiful in the earth’s crust there are sufficient amounts of it to make its commercial use very alluring.

The beryllium air-machine may well be a combination vacuum and plane ship with the cubic capacity of the wings large enough to be a great factor in keeping the ship in the air.

Airplane Stability Aided Such a development would tend to make airplanes more stable and only one-third the power would be necessary to drive them at high speeds. And that does not cover all of the advantages. Such ships could be so designed that even should the power plant fail, the vacuum compartments would be sufficiently large to permit the ship to settle gradually to earth, dropping with the grace and gentleness of a falling leaf.

In the design of such ships, it is logical to assume that the vacuum compartments would take on cellular form to prevent the ever-present atmosphere from crushing them. Some idea of this construction will be gained from the drawings which show the interior construction of a dirigible. Let the metallurgists give us the cheap beryllium and we shall soon have the vacuum all metal planes and dirigibles. Engineers stand ready and willing to provide us with such luxuries of air travel; all they need is the necessary material.