One of the things I really like about these old articles is that they assume a certain level of competence, and if you don’t have it, well that’s your fault. Nowadays if you posted this article you’d have to find out if you are libel for some moron drinking hydrochloric acid through the rubber tube because he thought it was a straw. 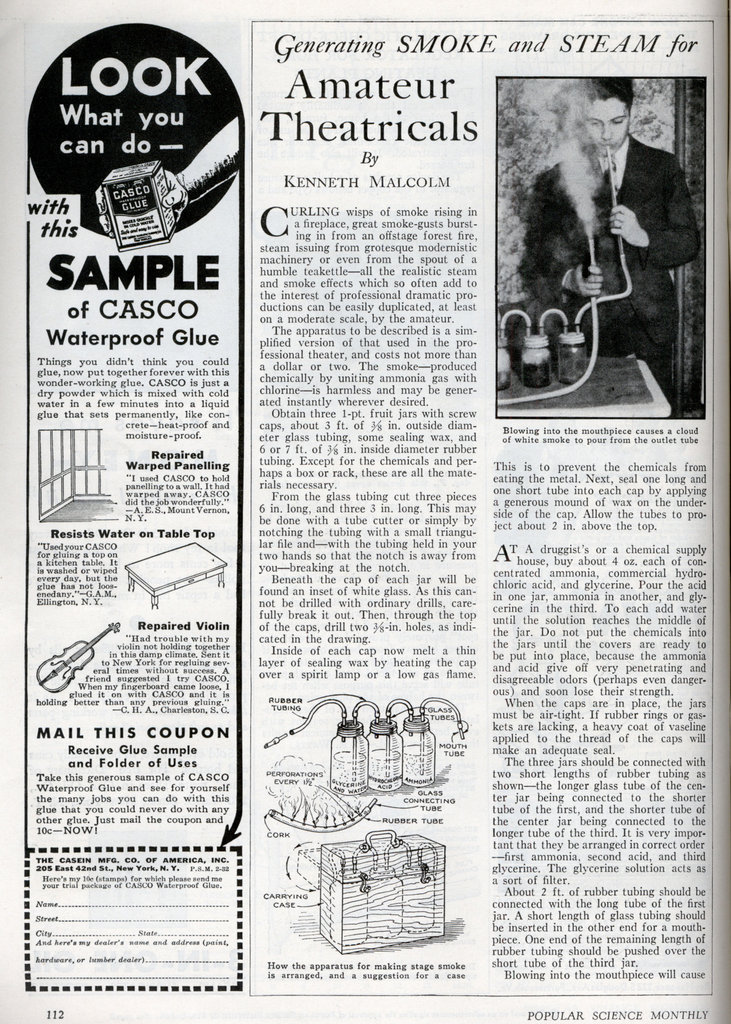 CURLING wisps of smoke rising in a fireplace, great smoke-gusts bursting in from an offstage forest fire, steam issuing from grotesque modernistic machinery or even from the spout of a humble teakettleâ€”all the realistic steam and smoke effects which so often add to the interest of professional dramatic productions can be easily duplicated, at least on a moderate scale, by the amateur.

The apparatus to be described is a simplified version of that used in the professional theater, and costs not more than a dollar or two. The smokeâ€”produced chemically by uniting ammonia gas with chlorineâ€”is harmless and may be generated instantly wherever desired.

Obtain three 1-pt. fruit jars with screw caps, about 3 ft. of 3/8 in. outside diameter glass tubing, some sealing wax, and 6 or 7 ft. of 3/8 in. inside diameter rubber tubing. Except for the chemicals and perhaps a box or rack, these are all the materials necessary.

From the glass tubing cut three pieces 6 in. long, and three 3 in. long. This may be done with a tube cutter or simply by notching the tubing with a small triangular file andâ€”with the tubing held in your two hands so that the notch is away from youâ€”breaking at the notch.

Beneath the cap of each jar will be found an inset of white glass. As this cannot be drilled with ordinary drills, carefully break it out. Then, through the top of the caps, drill two 3/8-in. holes, as indicated in the drawing.

Inside of each cap now melt a thin layer of sealing wax by heating the cap over a spirit lamp or a low gas flame.

This is to prevent the chemicals from eating the metal. Next, seal one long and one short tube into each cap by applying a generous mound of wax on the underside of the cap. Allow the tubes to project about 2 in. above the top.

AT A druggist’s or a chemical supply A house, buy about 4 oz. each of concentrated ammonia, commercial hydrochloric acid, and glycerine. Pour the acid in one jar, ammonia in another, and glycerine in the third. To each add water until the solution reaches the middle of the jar. Do not put the chemicals into the jars until the covers are ready to be put into place, because the ammonia and acid give off very penetrating and disagreeable odors (perhaps even dangerous) and soon lose their strength.

When the caps are in place, the jars must be air-tight. If rubber rings or gaskets are lacking, a heavy coat of vaseline applied to the thread of the caps will make an adequate seal.

Blowing into the mouthpiece will cause white smoke to pour from the tube at the other end of the apparatus. It may be led by the tube wherever desired. Instead of coming from a single point, the smoke may be distributed. An attachment for this purpose may be made by taking a 2-ft. length of rubber tubing, corking one end, inserting a short glass tube in the other end for aid in connecting, and cutting a line of holes at intervals of 1-1/2 in.

To assist in transporting and storing the apparatus and prevent the jars from being overturned, it is advisable to construct a rack or a complete case.

Commercial smoke apparatus is generally operated by air that has been compressed in a tank by a hand pump. This arrangement may be imitated by amateur builders, if so desired, but lung power is much cheaper and less complicated.