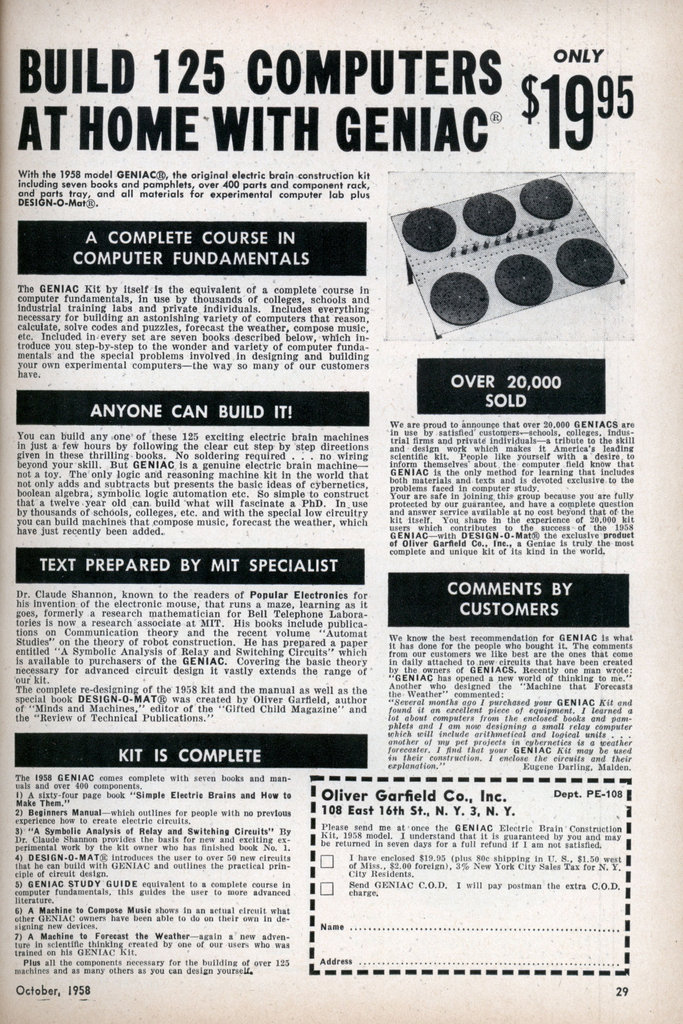 In addition to a complete assortment of all necessary parts is a carefully prepared instruction manual which explains in detail how to wire each circuit. The 63-page manual also furnishes basic information on the application of symbolic logic to circuits, which is the basis of the Geniac kit.

The kit is completely safe for anyone to use. No soldering is required, and every circuit operates on one common flashlight battery.

By the use of ingeniously designed parts, such as a new type multiple switch and special circuit jumpers, the kit provides circuits that “act out” or “prove” the truth of verbal statements about certain situations. One of the most popular of these circuits is the machine for the two jealous wives. In this problem, a “brain machine” must be devised that will inform either or both wives of unfaithfulness on the part of their husbands.

Mathematical basis for the Geniac circuits is the application of “Boolean algebra” to circuit design. George Boole, a nineteenth century British mathematician, evolved a system of logic in which symbols represent specific possibilities of things happening one way or another, such as A and B, or, A or B, etc. Certain types of information, when stated verbally, can be analyzed and reduced to simple statements. These statements, or “elements,” are, in turn, expressed in symbols. The symbolic statement or “formula” then represents the verbal statement. From the symbols, it can be determined what circuit components are needed and how, to a large extent, they must be arranged in order to provide a circuit that “acts out” the original statement. The gigantic computers that solve complex problems in the twinkling of an eye are based, in part, on these principles.

A good illustration of how this system works is the problem of the hall light, one of the circuits included in the kit. The problem, stated in normal language, is this: a man wants to turn off or turn on a hall light either from downstairs or from upstairs. A circuit must be devised so that if either switch is turned the light will go off if it was on, and will go on if it was off.

This is a practical problem and involves a kind of wiring that may be familiar to many readers. It implies a switching arrangement in which either of two switches may be “off” or “on” in any position, depending on the relative position of the other switch.

Stating this in Boolean symbols: U-D v U’-D’. The “v” stands for an expression similar to “and/or” and implies a state of parallelism between the two expressions it connects. Thus, the formula tells us that two series switches are needed in parallel with each other. Since each switch must perform one of two possible functions (the “either-or” element), each switch must be a double-throw switch. The diagram and schematic shown here illustrate this reasoning process.

In every application of Boolean logic to a verbal statement, the circuit must prove the truth of the statement. In this case, the final circuit fulfills the requirements of the man with the upstairs and downstairs halls. In other circuits which can be built with the kit, a similar proof is achieved.

For instance, the kit may be used to construct an electronic version of tic-tac-toe. Now, anyone who has played this game knows that if you make the first move, regardless of what your opponent does, you must either win or draw, provided you make the best possible move following each of your opponent’s moves. In other words, the player who goes second cannot win unless the first player commits an error. The Geniac circuit for this situation is a complex one, but once constructed, proves infallible. In a word, you can’t beat the machine!

The underlying principles of the Geniac kit have been in development and research for a number of years. One of the best known pioneers in this country in the application of algebraic analysis to the problems of telephone circuitry is Dr. Claude Shannon of Bell Telephone Laboratories, whose “magnetic mouse” was described in Popular Electronics.

In addition to its value as a source of amusement and education, the kit exhibits certain technological features that may have widespread implications in other areas. The switches themselves are designed for simplicity and economy. Where the equivalent of several banks is needed, which ordinarily requires a multi-deck or multi-wafer switch built up vertically, the Geniac method uses a single wafer. Contacts on this wafer provide the equivalent—laterally—of what conventionally ganged switches do. This single wafer unit is an exclusive Geniac development.

With the 1958 model GENIAC®, the original electric brain construction kit including seven books and pamphlets, over 400 parts and component rack, and parts tray, and all materials for experimental computer lab plus DESIGN-O-Mat®.

A COMPLETE COURSE IN COMPUTER FUNDAMENTALS The GENIAC Kit by itself Is the equivalent of a complete course in computer fundamentals. In use by thousands of colleges, schools and industrial training labs and private individuals. Includes everything necessary for building an astonishing variety of computers that reason, calculate, solve codes and puzzles, forecast the weather, compose music, etc. Included in every set are seven books described below, which introduce you step-by-step to the wonder and variety of computer fundamentals and the special problems involved in designing and building your own experimental computers—the way so many of our customers have.

ANYONE CAN BUILD IT!

You can build any one of these 125 exciting electric brain machines in just a few hours by following the clear cut step by step directions given in these thrilling books. No soldering required … no wiring beyond your skill. But GENIAC is a genuine electric brain machine-not a toy. The only logic and reasoning machine kit in the world that not only adds and subtracts but presents the basic ideas of cybernetics, boolean algebra, symbolic logic automation etc. So simple to construct that a twelve year old can build what will fascinate a PhD. In use by thousands of schools, colleges, etc. and with the special low circuitry you can build machines that compose music, forecast the weather, which have just recently been added.

TEXT PREPARED BY MIT SPECIALIST Dr. Claude Shannon, known to the readers of Popular Electronics for his invention of the electronic mouse, that runs a maze, learning as it goes, formerly a research mathematician for Bell Telephone Laboratories is now a research associate at MIT. His books include publications on Communication theory and the recent volume “Automat Studies” on the theory of robot construction. He has prepared a paper entitled “A Symbolic Analysis of Relay and Switching Circuits” which is available to purchasers of the GENIAC. Covering the basic theory necessary for advanced circuit design it vastly extends the range of our kit.

The complete re-designing of the 1958 kit and the manual as well as the special book DESIGN-O-MAT® was created by Oliver Garfield, author of “Minds and Machines,” editor of the “Gifted Child Magazine” and the “Review of Technical Publications.”

KIT IS COMPLETE The 1958 GENIAC comes complete with seven books and manuals and over 400 components.

I) A sixty-four page book “Simple Electric Brains and How to Make Them.”

2} Beginners Manual—which outlines for people with no previous experience how to create electric circuits.

S) “A Symbolic Analysis of Relay and Switching Circuits” By Dr. Claude Shannon provides the basis for new and exciting experimental work by the kit owner who has finished book No. 1.

4) DESIGN-0-MAT; introduces the user to over 50 new circuits that he can build with GENIAC and outlines the practical principle of circuit design.

5) GENIAC STUDY GUIDE equivalent to a complete course in computer fundamentals, this guides the user to more advanced literature.

6) A Machine to Compose Music shows in an actual circuit what other GENIAC owners have been able to do on their own In designing new devices.

7) A Machine to Forecast the Weather—again a new adventure in scientific thinking created by one of our users who was trained on his GKN1AC Kit.

Plus all the components necessary for the building of over 125 machines and as many others as you can design yourself.

OVER 20,000 SOLD We are proud to announce that over 20.000 GEN I ACS are in use by satisfied’ customers-—schools, colleges, industrial firms and private individuals—a tribute to the skill and design work which makes it America’s leading scientific kit. People like yourself with a desire to inform themselves’ about the computer held know that GENIAC is the only method for learning that includes both materials and texts and is devoted exclusive to the problems faced in computer study.

Your are safe in joining this group because you are fully protected by our guarantee, and have a complete question and answer service available at no cost beyond that of the kit itself. You share in the experience of 20,000 kit users which contributes to the success of the 1958 GENIAC—with DESIGN-O-Mat® the exclusive product of Oliver Garfield Co., Inc., a Geniac is truly the most complete and unique kit of its kind in the world.

COMMENTS BY CUSTOMERS We know the best recommendation for GENIAC is what it has done for the people who bought it. The comments from our customers we like best are the ones that come in dally attached to new circuits that have been created by the owners of GENIACS. Recently one man wrote: “GENIAC has opened a new world of thinking to me.” Another who designed the “Machine that Forecasts the Weather” commented: “Several months ago I purchased your GENIAC Kit and found it an excellent piece of equipment. I learned a lot about computer* from the enclosed books and pamphlet* and I am now designing a small relay computer which will include arithmetical and logical units . . . another of my pet projects in cybernetics is a weather forecaster. I find that your GENIAC Kit may be used in their construction. 1 enclose the circuits and their explanation.” Eugene Darling, Maiden.