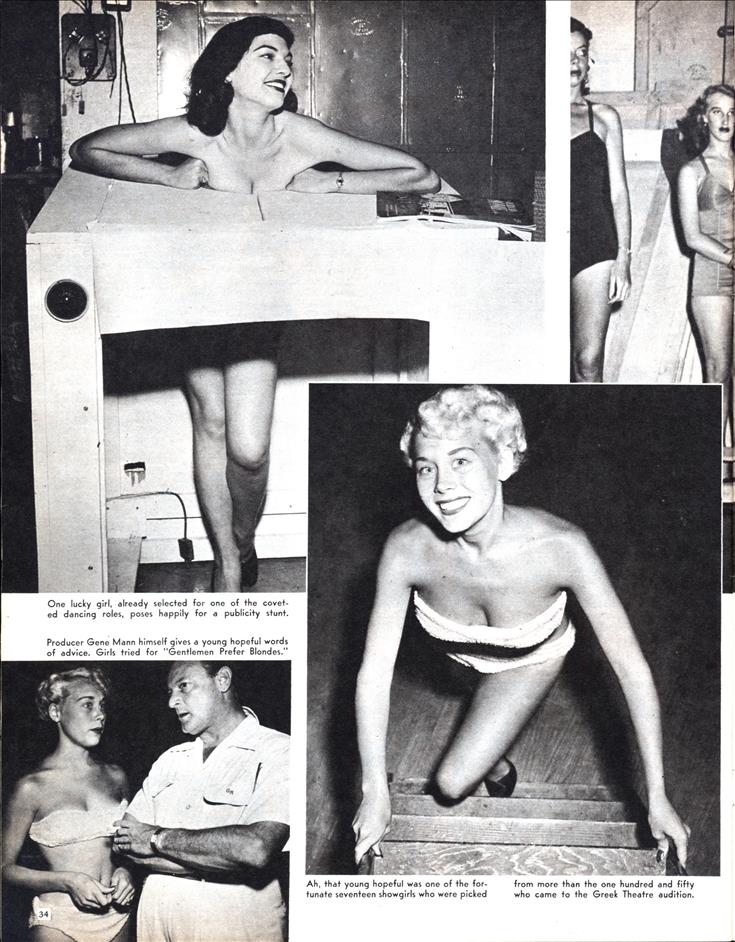 GENE MANN, who is known as the Rodgers and Hammerstein of Hollywood, recently held auditions for the California version of Gentlemen Prefer Blondes. the musical comedy based on the hook by Anita Loos that is still going strong on Broadway.

The Hollywood Blondes was presented at the famous Greek Theatre with great success, but before the curtain went up, Mr. Mann and his staff spent many a pleasant hour selecting the girls who would dance to the comedy’s line songs. More than one hundred and fifty girls strutted their stuff to prove that they were capable of providing a fitting chorus line for Lorelei Lee, the play’s heroine. Of course, not all the girls who tried out for the parts were blondes, hut any one of them would dye her hair at the drop of a contract. Anything for the thittir, you know!

A few of the girls were new-comers to the stage, hut many had danced in legitimate shows before. They were all tested for poise and grace, and as the elimination went on, strained faces and nervous nail-biting became more noticeable. First to he eliminated were most of the girls who showed up in street clothes; good figures were one of the prime requisites, and the producers wanted to he certain of what they were getting.

Between individual try-outs, the girls sat around in groups, exchanging casting gossip and wondering which of them would make the grade in this show. All of them had to be at least five feet five inches tall, so the stage was crowded with what was probably the most statuesque group of showgirls ever assembled in Hollywood.

Finally the lucky seventeen were selected and the others sorrowfully left, dreaming of another show and another audition. The producer’s staff collapsed with weariness, discovering that even looking at beauty all day can be fatiguing. Can that be true?