Popular Electronics
Issue: May, 1956
Posted in: Radio
3 Comments on German Electronics Moves Ahead (May, 1956)

German Electronics Moves Ahead (May, 1956) 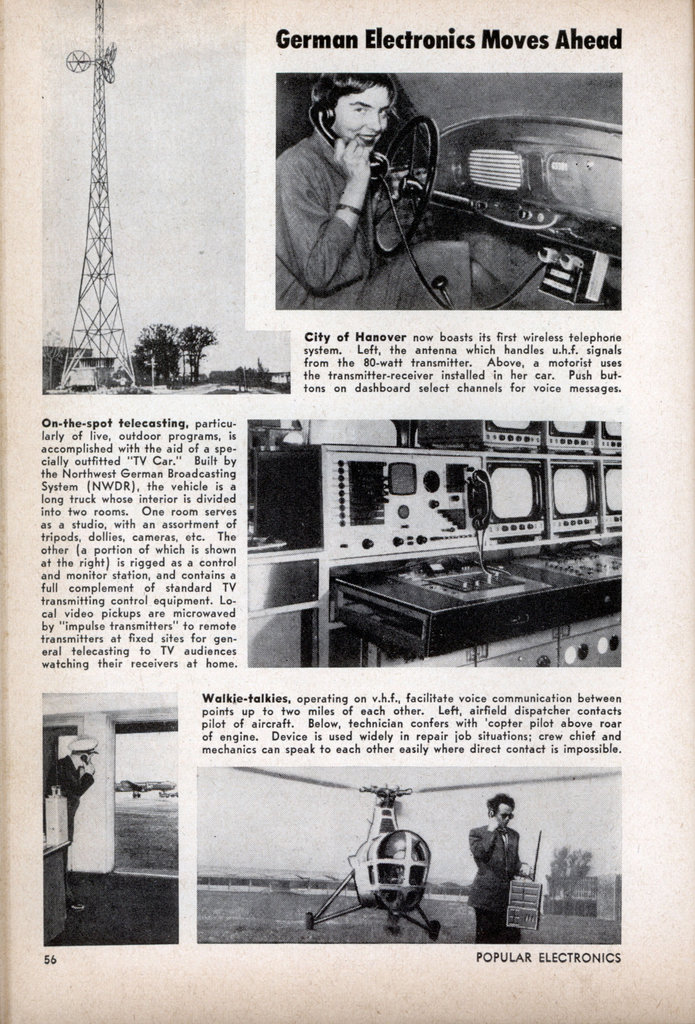 City of Hanover now boasts its first wireless telephone system. Left, the antenna which handles u.h.f. signals from the 80-watt transmitter. Above, a motorist uses the transmitter-receiver installed in her car. Push buttons on dashboard select channels for voice messages.

On-the-spot telecasting, particularly of live, outdoor programs, is accomplished with the aid of a specially outfitted “TV Car.” Built by the Northwest German Broadcasting System (NWDR), the vehicle is a long truck whose interior is divided into two rooms. One room serves as a studio, with an assortment of tripods, dollies, cameras, etc. The other (a portion of which is shown at the right) is rigged as a control and monitor station, and contains a full complement of standard TV transmitting control equipment. Local video pickups are microwaved by “impulse transmitters” to remote transmitters at fixed sites for general telecasting to TV audiences watching their receivers at home.

Walkie-talkies, operating on v.h.f., facilitate voice communication between points up to two miles of each other. Left, airfield dispatcher contacts pilot of aircraft. Below, technician confers with ‘copter pilot above roar of engine. Device is used widely in repair job situations; crew chief and mechanics can speak to each other easily where direct contact is impossible.