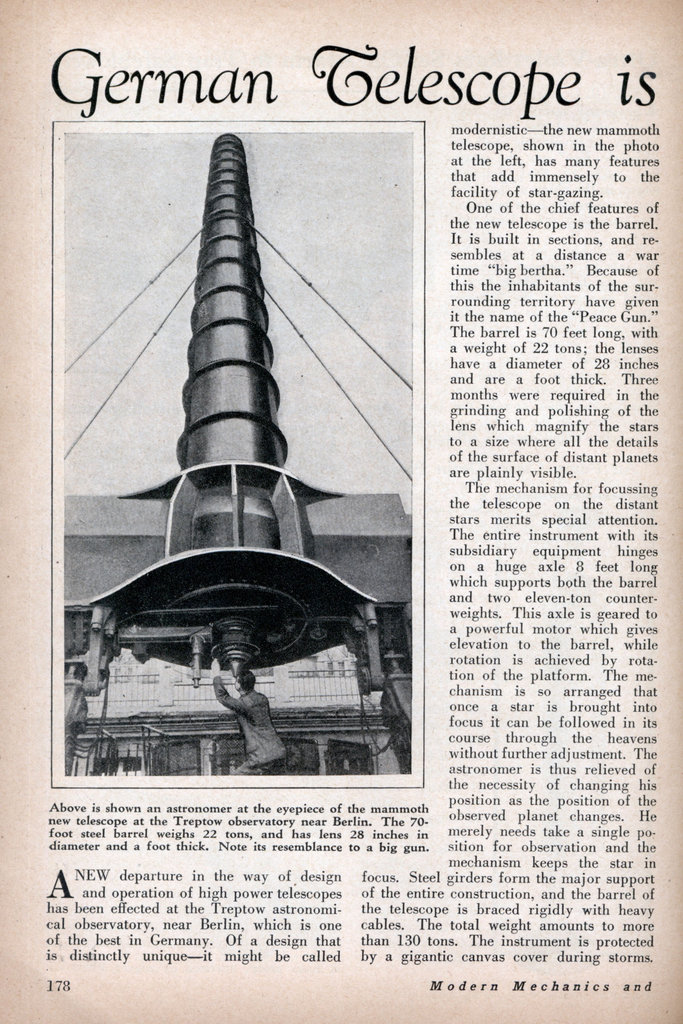 One of the chief features of the new telescope is the barrel. It is built in sections, and resembles at a distance a war time “big bertha.” Because of this the inhabitants of the surrounding territory have given it the name of the “Peace Gun.” The barrel is 70 feet long, with a weight of 22 tons; the lenses have a diameter of 28 inches and are a foot thick. Three months were required in the grinding and polishing of the lens which magnify the stars to a size where all the details of the surface of distant planets are plainly visible.

The mechanism for focussing the telescope on the distant stars merits special attention. The entire instrument with its subsidiary equipment hinges on a huge axle 8 feet long which supports both the barrel and two eleven-ton counterweights. This axle is geared to a powerful motor which gives elevation to the barrel, while rotation is achieved by rotation of the platform. The mechanism is so arranged that once a star is brought into focus it can be followed in its course through the heavens without further adjustment. The astronomer is thus relieved of the necessity of changing his position as the position of the observed planet changes. He merely needs take a single position for observation and the mechanism keeps the star in focus. Steel girders form the major support of the entire construction, and the barrel of the telescope is braced rigidly with heavy cables. The total weight amounts to more than 130 tons. The instrument is protected by a gigantic canvas cover during storms.