Modern Mechanix
Issue: Jan, 1933
Posted in: Sports
No Comments on Get Some NEW THRILLS from WINTER SPORTS (Jan, 1933)

Get Some NEW THRILLS from WINTER SPORTS (Jan, 1933) 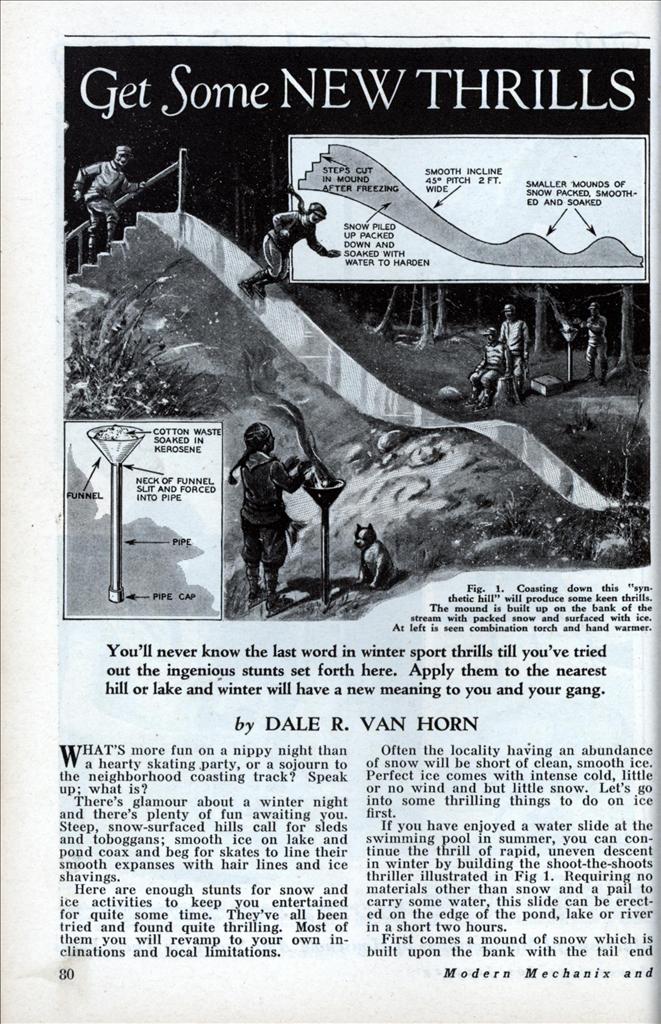 Get Some NEW THRILLS from WINTER SPORTS

You’ll never know the last word in winter sport thrills till you’ve tried out the ingenious stunts set forth here. Apply them to the nearest hill or lake and winter will have a new meaning to you and your gang.

WHAT’S more fun on a nippy night than a hearty skating party, or a sojourn to the neighborhood coasting track? Speak up; what is?

There’s glamour about a winter night and there’s plenty of fun awaiting you. Steep, snow-surfaced hills call for sleds and toboggans; smooth ice on lake and pond coax and beg for skates to line their smooth expanses with hair lines and ice shavings.

Here are enough stunts for snow and ice activities to keep you entertained for quite some time. They’ve all been tried and found quite thrilling. Most of them you will revamp to your own inclinations and local limitations.

Often the locality having an abundance of snow will be short of clean, smooth ice. Perfect ice comes with intense cold, little or no wind and but little snow. Let’s go into some thrilling things to do on ice first.

If you have enjoyed a water slide at the swimming pool in summer, you can continue the thrill of rapid, uneven descent in winter by building the shoot-the-shoots thriller illustrated in Fig 1. Requiring no materials other than snow and a pail to carry some water, this slide can be erected on the edge of the pond, lake or river in a short two hours.

First comes a mound of snow which is built upon the bank with the tail end tapering out upon the ice. This mound should be packed well as the structure rises until you have a pitch on the pond side of perhaps 45 degrees. The pitch on the back side should be even steeper.

Building the Snow Slide Build this as high as you want to, with the snow angling Off on the sides. Make the top flat and at least 2 feet wide. Chop a hole through the ice nearby and soak down the snow on the sides, front and back. See that the incline is quite smooth. You can finish this track nicely with a board.

Two or more smaller mounds are also built out upon the ice and in line with the front slope, soaked and also finished oft”. Their size and contour may be varied to suit.

The thrill-seeking skater walks up the bank, ascends the steps, and, crouching low as he descends, snoots down the incline and negotiates the lower mounds upon the ice. The fun of this contrivance continues as long as you wish, but if used much, the mounds should be resoaked at night and made ready for the next episode.

Ice merry-go-rounds are great fun. Two types are shown in Fig. 3. Both comprise a post set through the ice with a wheel on top. The small wheel is provided with a rope which the skater grasps and gets up speed. The other type has a plank fastened to the top of the larger wheel. This can be used as a regular merry-go-round, or you can lay over one end and skate to your heart’s content. One skater on each end will be best, to give better balance.

If you are keen for baseball and other summer games, ice base hockey will appeal to you. You simply lay out a diamond on smooth ice and play a game of baseball with hockey sticks and pucks instead of balls, bats and gloves. To insure the permanency of your bases, home plate and the pitcher’s box, scrape a shallow depression at the proper points on the ice, lay therein a square of colored paper, soak down and then pour the cavity full of water again and let it freeze. Thus your marks will stand out plainly yet will “be free from abuse.

Handicap Shinny Like Midget Golf Handicap shinny is a game invented primarily for you who live close by a winding stream where there is plenty of good ice. The more crooked the creek, the better the game.

First check off a stretch of ice 300 yards long and scratch a good line in the ice at both ends as illustrated in Fig. 6. One line becomes the start; the other the finish. In between, lay out a number of snow bunkers to suit your own fancy, extending mostly from the bank out upon the ice. The mounds of snow need not be high as but a little close-packed snow will stop a very ambitious puck.

Score is kept as in golf. You’ll find that the game is far more interesting and difficult than you might first suppose, and that skill in placing shots will figure largely in low scores.

If the temperature holds down below zero, you can use this kink to pack the track for some good coasting. A sheet of galvanized iron 5 feet wide and about 7 feet long should be procured and the edges slightly bent up. A wire for pulling is then attached to the front end. A fire of coal is built on the sheet, which is pulled along the future coasting track—slowly. Heat from the fire melts the snow surface, which is smoothed and hardened again with the subsequent freezing. If properly done you can, in a short time, get an almost ice-hard surface for the track.

A long hill, rather steep, regular in shape and covered with a thick blanket of snow, offers real coasting possibilities. Instead of leading the track straight down one side you can, with these conditions, run a circular track around it. If conditions are right, you may be able more than completely to encircle it. But banking will be necessary for part of the track at least. In fact the track should slope inward to offset the centrifigual force created with a speedy toboggan or sled.

You’ll Need This Hand Warmer An excellent accessory for either the coasting or skating party is the torch shown in Fig 1. This not only will afford a rather reliable form of illumination, but will act also as a hand warmer. To make this get a short length of pipe and turn a cap on the lower end. Get a funnel to fit the top, slit open the neck and spread it so that the spout fits snugly in the pipe. A wick made from a rope which is of a size to fit in the pipe snugly, and a wad of cotton, will complete the torch. To use, pour kerosene into the funnel until the pipe is full, then light the cotton. This flare will last for more than an hour and can be easily refueled.

A shelter, which is often necessary for either skating or coasting, can be made from either ice blocks prepared at hand, or from blocks of snow, packed in a mould and stacked. The illustration shows an open side shelter having a pole roof covered with straw and then snow, a plank seat laid on boxes within, and plenty of room just outside for a roaring fire. These shelters should always face the south, or away from the prevailing wind of your own locality.