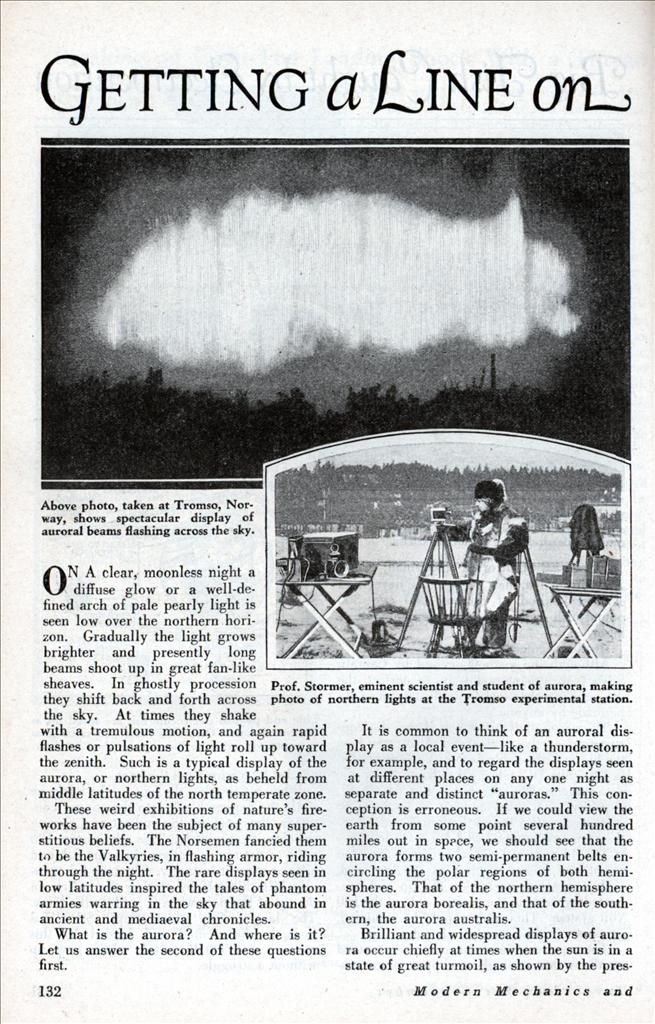 Getting a Line on the Aurora

ON A clear, moonless night a diffuse glow or a well-defined arch of pale pearly light is seen low over the northern horizon. Gradually the light grows brighter and presently long beams shoot up in great fan-like sheaves. In ghostly procession they shift back and forth across the sky. At times they shake with a tremulous motion, and again rapid flashes or pulsations of light roll up toward the zenith. Such is a typical display of the aurora, or northern lights, as beheld from middle latitudes of the north temperate zone.

These weird exhibitions of nature’s fireworks have been the subject of many superstitious beliefs. The Norsemen fancied them to be the Valkyries, in flashing armor, riding through the night. The rare displays seen in low latitudes inspired the tales of phantom armies warring in the sky that abound in ancient and mediaeval chronicles.

What is the aurora? And where is it? Let us answer the second of these questions first.

It is common to think of an auroral display as a local event—like a thunderstorm, for example, and to regard the displays seen at different places on any one night as separate and distinct “auroras.” This conception is erroneous. If we could view the earth from some point several hundred miles out in space, we should see that the aurora forms two semi-permanent belts encircling the polar regions of both hemispheres. That of the northern hemisphere is the aurora borealis, and that of the southern, the aurora australis.

Brilliant and widespread displays of aurora occur chiefly at times when the sun is in a state of great turmoil, as shown by the presence of many sunspots and great “prominences” of incandescent gas shot out from the solar atmosphere. These displays are also accompanied by so-called magnetic storms on earth, and interfere with the operation of telegraph lines and radio.

The best answer science is able to give at present to the question “What is the aurora?” is that this phenomenon is a glow discharge of electricity through the rarefied gases of the upper atmosphere, more or less similar to the glows seen in neon tubes, mercury-vapor lamps and the like. The exciting cause of the discharge is supposed to be the bombardment of the atmosphere by electrified particles from the sun.