Modern Mechanix
Issue: Aug, 1933
Posted in: Sign of the Times, Space
Tags: telescopes
3 Comments on Getting More Light On the Moon (Aug, 1933)

This shows you how fast technology can change. Only 36 years after this article declared that a trip to the moon was “apparently impossible”, Neil Armstrong actually walked on it. 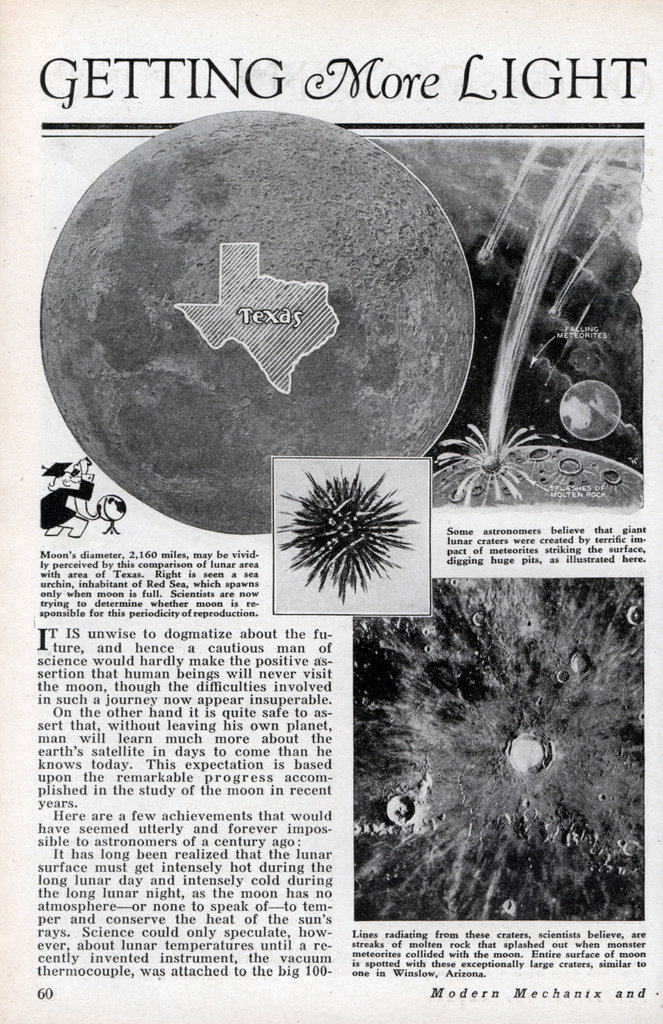 GETTING More LIGHT On the Moon

IT IS unwise to dogmatize about the future, and hence a cautious man of science “would hardly make the positive assertion that human beings will never visit the moon, though the difficulties involved in such a journey now appear insuperable. On the other hand it is quite safe to assert that, without leaving his own planet, man will learn much more about the earth’s satellite in days to come than he knows today. This expectation is based upon the remarkable progress accomplished in the study of the moon in recent years.

Here are a few achievements that would have seemed utterly and forever impossible to astronomers of a century ago:

It has long been realized that the lunar surface must get intensely hot during the long lunar day and intensely cold during the long lunar night, as the moon has no atmosphereâ€”or none to speak ofâ€”to temper and conserve the heat of the sun’s rays. Science could only speculate, however, about lunar temperatures until a recently invented instrument, the vacuum thermocouple, was attached to the big 100-inch telescope at Mount Wilson Observatory and applied to the actual measurement of these temperatures from point to point on the surface of the moon.

These measurements show that wherever the sun’s rays fall vertically upon the moon the surface becomes a little hotter than boiling water, while at the edge of the illuminated area the surface is nearly as cold as liquid air. When the solar rays are withdrawn during the lunar night, which is half a month long, the surface gets colder and colder until its temperature is probably as low as 240 degrees below zero Fahrenheit.

A range of about 450 degrees between midday and midnight is one of the reasons why human visits to the moon are apparently impossible!

Though bygone astronomers did not believe the moon to be made of green cheese, they did not know, as we do today, that the surface material must consist mainly of some material similar to volcanic ash or pumice. This has been proved by Prof.

R. W. Wood, of Johns Hopkins, who has photographed portions of the moon with color screens and plates sensitive to different regions of the spectrum. Comparison of the photographs with those made of sulphur-coated rock in the laboratory shows almost certainly that there are deposits of sulphur on the moon.

As sulphur is often found in the materials ejected from volcanoes, Prof. Wood’s discovery supports the old idea that the thousands of so-called craters on the moon are the vents of extinct volcanoes, but there are some serious objections to this idea and a different one is now favored by many authorities. The moon is undoubtedly hit by millions of meteorites every day, and some of these bodies are certainly big enough to make conspicuous scars on its surface. Even the earth, though well protected by its atmosphere, is now known to be scarred in many places by meteoric bombardment as witness the long-famous Meteor Crater in Arizona.

Bullets have been fired into a little leaden moon by some investigators and craters have been produced very similar in appearance to those seen in lunar photographs. The terrific impact of a big meteorite, traveling at enormous speed, would produce enough heat to melt and volatilize the rocky surface of the moon over a large area.

Here we have a possible explanation of the long white “rays” that extend for hundreds of miles from some of the larger craters and have caused more controversy among astronomers than any other feature of the moon’s surface. These rays may have been formed by the splashing of molten rock when an exceptionally large meteorite hit the moon.

One of the first uses made of the Mount Wilson telescope already mentionedâ€”the largest in the worldâ€”was to take a series of photographs of the moon, which revealed hundreds of craters and other details previously unknown. At the same institution a remarkable campaign of lunar mapping has now been undertaken by a committee of the Carnegie Institution.

The new system of mapping employed at Mount Wilson consists of taking numerous sectional photographs of the moon, which are pro-jected by means of lantern-slides and concave mirrors upon the surface of a small globe coated with magnesia powder, as illustrated.

All objects appear on*the globe in their true shapes and positions and photographs made from the illuminated globe give an accurate map. A contour map of the moon is also being made by a process of stereoscopic photography similar to that used in mapping the earth from an airplane.

It is, of course, well known that the lunar attraction, combined with that of the sun, causes tides in the ocean and also in the solid crust of the earth, and some seismologists believe that it plays a part in causing earthquakes. Many of the other effects that the moon has been alleged to exercise upon the earth, including the control of weather, are mere “moonshine.”

One remarkable and mysterious influence, however, has recently come to light. Studies by H. Munro Fox and other biologists show that a number of living organisms, particularly marine animals, exhibit a lunar periodicity in reproduction. Thus a species of sea urchin living in the Red Sea always spawns at full moon, and the palolo worm, living in Pacific coral reefs, spawns once a year exactly at the last quarter of the October moon.

This curious coincidence of reproductive activity with the moon’s phases appears to be well established but has not been satisfactorily explained. Perhaps, after all, there is something in the old idea that moonlight stimulates human love-making!