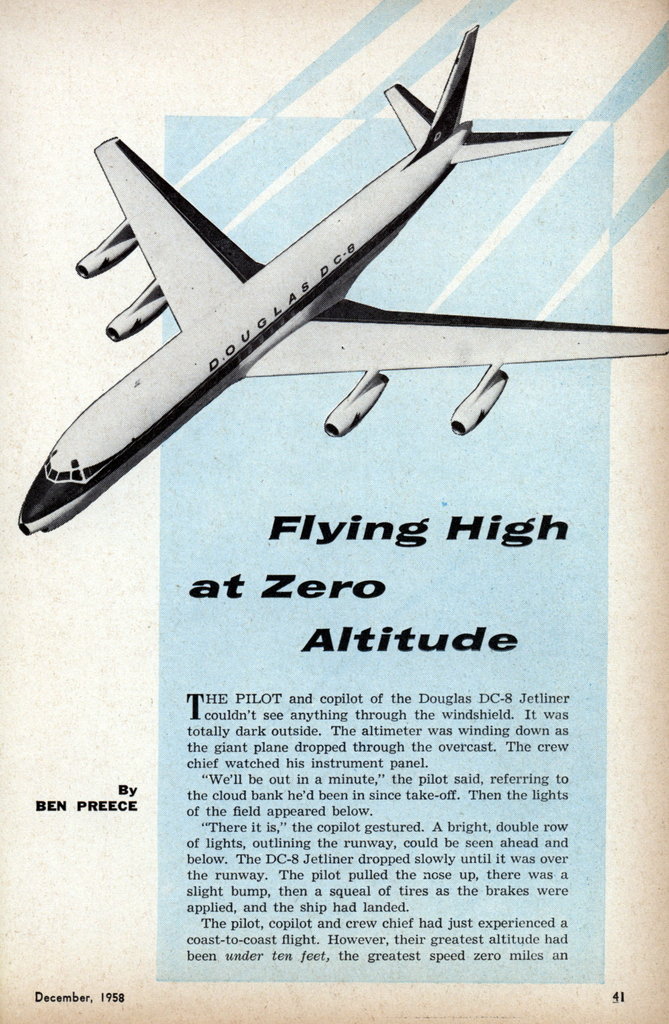 THE PILOT and copilot of the Douglas DC-8 Jetliner couldn’t see anything through the windshield. It was totally dark outside. The altimeter was winding down as the giant plane dropped through the overcast. The crew chief watched his instrument panel.

“We’ll be out in a minute,” the pilot said, referring to the cloud bank he’d been in since take-off. Then the lights of the field appeared below.

“There it is,” the copilot gestured. A bright, double row of lights, outlining the runway, could be seen ahead and below. The DC-8 Jetliner dropped slowly until it was over the runway. The pilot pulled the nose up, there was a slight bump, then a squeal of tires as the brakes were applied, and the ship had landed.

The pilot, copilot and crew chief had just experienced a coast-to-coast flight. However, their greatest altitude had been under ten feet, the greatest speed zero miles an hour. Yet, except for the gravitational forces, this crew had experienced every sensation of being in an airplane flying five hundred miles per hour at 35,000 feet. They had just completed a “ride” in the DC-8 flight simulator!

Electronic Flight. The DC-8 simulator works electronically to produce all the sensations of flying, including correct instrument readings, climb and bank altitudes, everything. It even has a closed-circuit television system which shows you an airfield, just as you would see it in the real DC-8.

Such simulators train pilots to fly planes that haven’t rolled off the assembly line.

Swift, new planes like the Douglas DC-8, the Boeing 707 and the Lockheed Electra will be “old hat” to airline pilots when they go into service.

A DC-8 simulator is as realistic as the actual airplane. It consists of a cockpit section, a scale model airport, a closed-circuit television system, and a computer system and servomechanisms to control the position of the cockpit section.

Realism in Training. The cockpit has all the dials, levers and gauges of the DC-8 itself. When the pilot “flys” the simulator, he experiences all the motions he would feel in real flight, except the g-loads. There are air pockets, sudden wind gusts, the sound of the jet engines, even the two quick jars the real DC-8 feels when it slips into a bank at high altitude and the wings lose their lift.

The crew of the simulator consists of the pilot, copilot, crew chief and instructor. Additional personnel outside operate the radio signal system and the closed-circuit television. The instructor can simulate any emergency a pilot will find in flight. The crew in the radio control room can duplicate the signal of any radio station in the world, and send six signals at once. Thus, the pilot may receive every radio indication that he is flying over Chicago, New York, Los Angeles or London. The radio crew can even vary the compass reading to allow for the magnetic variation typical in any part of the world.

In short, once the pilot and his crew take their seats, they are in a real airplane. When the jet engines are running, the cockpit may buck against the brakes, depending upon the throttle setting. When the brakes are released … off they go! The runway lights whirl by on either side. Looking straight ahead, the crew has the illusion of motion as the lights go by.

In the air, the instructor throws the book at the pilot. Engine failure may “occur,” hydraulic failure, cooling system failure, a change in the plane’s center of gravity, or any other trouble. More than one pilot has been saved by his simulator training. It teaches him to think fast and to do the right thing in a split second.

The DC-8 simulator does everything but fly. “It’s really an electronic brain,” one engineer said. “It must handle as many as forty variables at one time, including the six differential equations of motion. Then it must solve the problem and translate the answer into airplane motion, instrument readings and a visual television picture for the pilot.”

Among those forty variables are engine thrust, fuel pressure, Mach number, altitude, rate of climb or descent, and many others.

Simulator Design. D.c. circuits are used throughout for several reasons. Direct current provides a higher degree of accuracy, eliminates the possibility of phase shift, harmonic distortion, erratic instrument motion and noise pickup. The circuits are simpler and therefore easier to maintain. Direct current also eliminates the fluctuations and variations inherent in most of the alternating current supplies.

The DC-8 simulator uses printed-circuit boards and utilizes various electronic systems. For example: the characteristics of the engines are carried electronically on one circuit board. If another engine with an extra 500 horsepower is to be inserted, the old engine circuit board is removed and the new one plugged in. This way “engines” can be switched in only half an hour.

A room behind the cockpit section is lined with tall, grey cabinets. On the left are racks holding various amplifiers and other electronic gear. On the right are small circuit boards and motors with spinning dials. Under each unit is a label: Fuel Flow, Bank, Altitude, etc. The computer essentially takes a rate of change, integrates it, and tells the crew through cockpit motion or instrument readings just what is happening.

Televised Airport. In the TV room there is a model airport made to scale mounted on a long wall. A television camera is mounted on two tracks which run the length of the model airport. The model is built to a three-hundred-to-one scale, and represents an area 21,000 feet by 3000 feet. The TV camera is connected to the computer system. If the pilot dives, the camera tilts down. If he climbs, the camera tilts up. It follows every motion of the airplane, so it sees what the pilot would see. The picture is then flashed on the screen in front of the pilot.

A television projector is located on top of the DC-8 simulator cockpit. And the televised picture from the map room is projected onto a motion picture screen which covers the visible area viewed by the pilots in training.

The DC-8 simulator gives to the public a well-trained, proficient crew. This flying team practices and “polishes” on the ground. When the Jetliners are put into operation, the passengers can be sure that the pilot and his crew have many hours of simulated and actual flying time under their belts. The simulator offers safety through practice.