This is pretty cool. Someone realized that when you fax something you can print the output at any scale you want. They connect the output to a giant inkjet printer (using an airbrush as a print head) to create huge images. 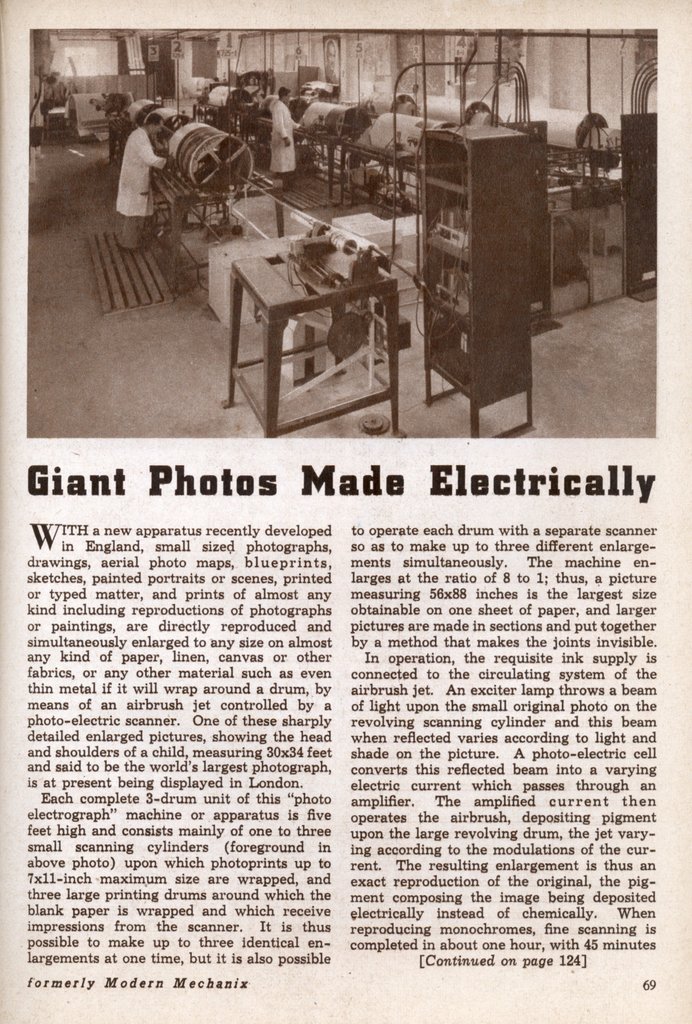 WITH a new apparatus recently developed in in England, small sized photographs, drawings, aerial photo maps, blueprints, sketches, painted portraits or scenes, printed or typed matter, and prints of almost any kind including reproductions of photographs or paintings, are directly reproduced and simultaneously enlarged to any size on almost any kind of paper, linen, canvas or other fabrics, or any other material such as even thin metal if it will wrap around a drum, by means of an airbrush jet controlled by a photo-electric scanner. One of these sharply detailed enlarged pictures, showing the head and shoulders of a child, measuring 30×34 feet and said to be the world’s largest photograph, is at present being displayed in London.

Each complete 3-drum unit of this “photo electrograph” machine or apparatus is five feet high and consists mainly of one to three small scanning cylinders (foreground in above photo) upon which photoprints up to 7xll-inch maximum size are wrapped, and three large printing drums around which the blank paper is wrapped and which receive impressions from the scanner. It is thus possible to make up to three identical enlargements at one time, but it is also possible to operate each drum with a separate scanner so as to make up to three different enlargements simultaneously. The machine enlarges at the ratio of 8 to 1; thus, a picture measuring 56×88 inches is the largest size obtainable on one sheet of paper, and larger pictures are made in sections and put together by a method that makes the joints invisible.

In operation, the requisite ink supply is connected to the circulating system of the airbrush jet. An exciter lamp throws a beam of light upon the small original photo on the revolving scanning cylinder and this beam when reflected varies according to light and shade on the picture. A photo-electric cell converts this reflected beam into a varying electric current which passes through an amplifier. The amplified current then operates the airbrush, depositing pigment upon the large revolving drum, the jet varying according to the modulations of the current. The resulting enlargement is thus an exact reproduction of the original, the pigment composing the image being deposited electrically instead of chemically. When reproducing monochromes, fine scanning is completed in about one hour, with 45 minutes needed for medium scanning and 30 minutes for coarse scanning.

Enlargements of full multi-color originals at about twice the cost of monochromes are also practicable. In this work the procedure is basically the same, with the difference that, from the original, three color-separated negatives are made by the usual photographic filtration method. From these negatives three black and white “printers” are produced, representing the yellow, red and blue elements of the original (in that order). The yellow, red and blue inks are then connected to their respective jet systems, and the three enlarged images are produced, exactly in register, one over the other on the same paper, thus producing a full range color picture.