I love the box on the second page listing all of the licensed TV stations in the U.S. All 25 of them. 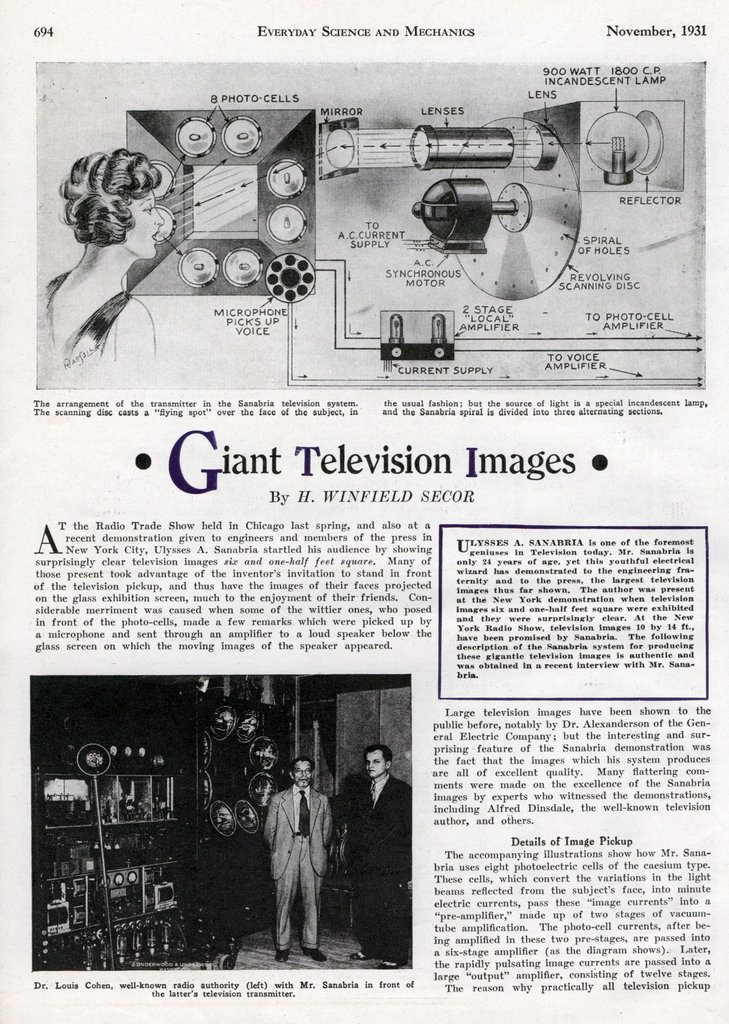 AT the Radio Trade Show held in Chicago last spring, and also at a recent demonstration given to engineers and members of the press in New York City, Ulysses A. Sanabria startled his audience by showing surprisingly clear television images six and one-half feet square. Many of those present took advantage of the inventor’s invitation to stand in front of the television pickup, and thus have the images of their faces projected on the glass exhibition screen, much to the enjoyment of their friends. Considerable merriment was caused when some of the wittier ones, who posed in front of the photo-cells, made a few remarks which were picked up by a microphone and sent through an amplifier to a loud speaker below the glass screen on which the moving images of the speaker appeared.

Large television images have been shown to the public before, notably by Dr. Alexanderson of the General Electric Company; but the interesting and surprising feature of the Sanabria demonstration was the fact that the images which his system produces are all of excellent quality. Many flattering comments were made on the excellence of the Sanabria images by experts who witnessed the demonstrations, including Alfred Dinsdale, the well-known television author, and others.

The accompanying illustrations show how Mr. Sanabria uses eight photoelectric cells of the caesium type. These cells, which convert the variations in the light beams reflected from the subject’s face, into minute electric currents, pass these “image currents” into a “pre-amplifier,” made up of two stages of vacuum-tube amplification. The photo-cell currents, after being amplified in these two pre-stages, are passed into a six-stage amplifier (as the diagram shows). Later, the rapidly pulsating image currents are passed into a large “output” amplifier, consisting of twelve stages.

The reason why practically all television pickup units have two to three stages of pre-amplification, placed close to the photocells, is to reduce the electrostatic capacity to ground of the input lead wires, and also to minimize the pickup of any extraneous electrical or magnetic effects. Mr. Sanabria in his television pickup uses eight caesium cells, each placed in the focus of a hemispherical, chromium-plated reflector.

In answer to a question, Mr. Sanabria stated that the infinitesimal photo-cell currents are amplified practically 2,000,000 times, before they reach the new Taylor “gas-arc” tube, which is mounted before the huge, revolving lens-studded scanning disc.

Up to the present time most of the television systems of any consequence have employed a powerful arc lamp as a source of illumination, played over the face of the subject through the holes in the scanning disc. Mr. Sanabria has greatly simplified and stabilized his tele-vosion pickup by utilizing, instead of the arc (which is bound to sputter and cause a flickering every now and then) the incandescent lamp. This lamp has a concentrated filament, similar to those found in the incandescent lamps used in stereop-ticons; it is rated at 900 watts and 1,800 candle-power, thus giving an efficiency of 1/2 watt per candle. (Further details are given in the September-October number of Television News).

As the diagram above shows, the 1,800-candle power light beam passes through a scanning disc, and a series of lenses, falling on a silver-plated glass mirror. It is very simple, with this system, to move the powerful scanning beam of light quickly in order to follow the subject’s face, if he should move about, as when dramas are produced, etc. The scanning disc used in the Sanabria pickup is made of thin metal, and contains 45 holes; these are arranged in three spirals of 15 holes each, spaced 120 degrees apart. No lenses are used in the scanning disc at the television transmitter pickup. Each light beam, reflected from the face of the person posing before the photo-cells, falls into some one of the ring of eight caesium cells; and, as the fluctuating lights and shadows fall upon the cells, corresponding minute electric currents are produced by the photo-cells. The photo-electric currents delivered by the cells or “eyes” are then passed into the various amplifiers, as shown clearly in the drawing. Several different lenses are arranged on a turret on the front of the scanner mechanism; each lens having a different focal length, so that the operator can adapt the pickup to a different class of subjects, posed at various distances from the photo-cells.

After all, we may have the finest photoelectric cells and a scanning disc built by the greatest tool-makers we can find, but if we pass photo-cell currents of the highest fidelity obtainable today, into an amplifier of improper or inefficient design, we can never hope to obtain a good, clear television image on the receiving screen.

It has required the very best of engineering brains to design a high-quality amplifier for television purposes and, judging from the excellent quality of the images as demonstrated by Mr. Sanabria, one can safely say that this able engineer has burnt much “midnight oil” solving mathematical equations, in order to make his dream of the well-nigh perfect amplifier come true.

Mr. Sanabria’s television-pickup amplifier provides practically distortionless amplification of all frequencies from one-quarter of a cycle up to 50,000 cycles; this amplifier will also pass frequencies much higher than 50 kc. and, in fact, at times frequencies up to 100 kc. pass through it successfully.

As the inventor explains, it is foolish to have the best of photo-cells and scanning mechanism (which will, for example, pick up and respond to frequencies of 50,000 cycles) but attempt passing these frequencies through an amplifier of inefficient design; since a poor amplifier invariably cuts off many of the more important image frequencies. It may well be said that, practically, the very heart of this television system lies in its wonderful designed amplifier of fourteen stages.

Questioned as to whether he was using the well-known system of “resistance coupling” in his amplifier, Mr. Sanabria vouchsafed the information that he had worked out mathematically a certain combination of electrical resistance, impedance and capacity coupling; which he had found to give most satisfactory results after much careful research and innumerable tests.

As will be seen from the illustration, the apparatus recently demonstrated employs two pre-stages of amplification; the amplified photo-electric “image currents” then passing into the six-stage amplifier, and finally into a powerful “output amplifier,” which comprises six stages, made up of twelve special Taylor amplifier tubes (equivalent in power to the RCA 845 amplifier tubes). The inventor has arranged these twelve large amplifier tubes in two sub-banks of six tubes each; all of the tubes being connected in parallel to a common output circuit, in order to produce a sufficiently powerful current to operate the Taylor “gas-arc” tube in the receiving scanner. Some idea of the tremendous amplification required may be obtained from the fact, that a current of 1,000 milliamperes at 40 volts potential, is necessary to properly light the gas-arc tube.

One of the principal secrets behind the production of the clear “life-size” television images evolved by Mr. Sanabria is embodied in the new Taylor “gas-arc” tube, used in place of the usual neon type, with which almost everyone is acquainted today. Some idea of the difference between the power and current consumption of the tube used by Sanabria and that of the low-power neon tube used by the average amateur, may be gleaned from the fact that the small neon tube is usually passing 20 to 30 milliamperes; while, in the giant Sanabria image projector here illustrated and described, the gas-arc tube has a current of 1,000 milliamperes passing through it!

The new Taylor gas-arc tube, shown in the illustration here, externally resembles a ’50 type standard amplifier tube, such as used in broadcast receivers. Some of the neon crater tubes have, in the past, been provided with water-cooled connections to carry off the considerable heat evolved; but, so improved is this new “gas-arc” tube in its design and construction that, with only air-cooling, it will stand a far greater current, for a given size tube, than the crater type. In fact the Taylor gas-arc tube will produce as much as nine times the luminosity, compared with the crater tube, both being similar in size.

The principle of the gas-arc projection tube, used in the Sanabria television sys-tem, is that a concentrated discharge, or brilliant point of light, is produced, instead of causing a large plate to become luminous, as in the old type neon tubes.

Furthermore, the tubes have been made to yield a brilliant spot of either orange-colored light, white light or, if desired, rotogravure brown.

The Receiving Scanner In order to produce the large images, Mr. Sanabria has built a large revolving lens disc, which spins at 900 R.P.M., or fifteen times per second, in front of the gas-arc tube. The highly amplified image currents from the photo-cells are impressed upon the electrodes of the gas-arc tube; and they cause the luminous ball of gas flame in the tube to fluctuate in brilliancy in perfect synchronism with the pulsations of light at the transmitter end of the television system.

The remarkable lens-disc employed here comprises 45 specially-made glass lenses, each about 3 inches in diameter, and driven by a synchronous three-phase A. C. motor operated from the circuit in the laboratory. In the recent demonstration, no lenses other than those in the revolving scanning disc were utilized, and Mr. Sana-bria used his well-known triple-spiral scanning disc at both the pickup and the projector; but in his new apparatus he will use a single spiral, of possibly 60 holes or lenses, as the case may be.

In. producing the 6-1/2-foot square television images before a large audience, Mr. Sanabria makes use of a sheet of thick glass mounted in a frame on casters; one side of the glass has been sand-blasted, giving the effect of “ground” glass. The rapidly fluctuating light beams, passing through the whirling lens disc, from the gas-arc inside the glass bulb, are projected on this glass screen. The audience is best placed at a distance of about 40 feet from the screen when the images are 6-1/2 square, as the demonstration showed; but when the size of the image is reduced to about 3 by 3 feet, the persons viewing the images, from the opposite side of the screen, may move up to within a distance of 20 feet or less. In his demonstration, the inventor provided a microphone to pick up the speech of the subject appearing before the photo-cell pickup. The voice currents were then amplified and passed into a dynamic speaker, placed in proximity to the projection screen.