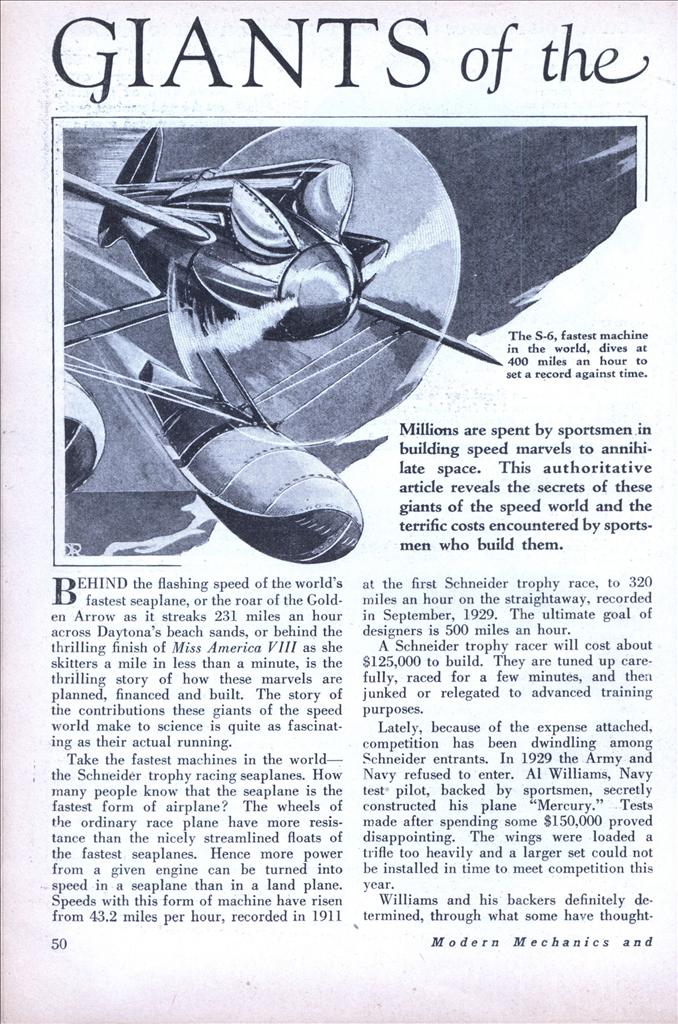 GIANTS of the SPEED WORLD

Millions are spent by sportsmen in building speed marvels to annihilate space. This authoritative article reveals the secrets of these giants of the speed world and the terrific costs encountered by sportsmen who build them.

BEHIND the flashing speed of the world’s fastest seaplane, or the roar of the Golden Arrow as it streaks 231 miles an hour across Daytona’s beach sands, or behind the thrilling finish of Miss America VIII as she skitters a mile in less than a minute, is the thrilling story of how these marvels are planned, financed and built. The story of the contributions these giants of the speed world make to science is quite as fascinating as their actual running.

Take the fastest machines in the world— the Schneider trophy racing seaplanes. How many people know that the seaplane is the fastest form of airplane? The wheels of the ordinary race plane have more resistance than the nicely streamlined floats of the fastest seaplanes. Hence more power from a given engine can be turned into speed in a seaplane than in a land plane. Speeds with this form of machine have risen from 43.2 miles per hour, recorded in 1911 at the first Schneider trophy race, to 320 miles an hour on the straightaway, recorded in September, 1929. The ultimate goal of designers is 500 miles an hour.

A Schneider trophy racer will cost about $125,000 to build. They are tuned up carefully, raced for a few minutes, and then junked or relegated to advanced training purposes.

Lately, because of the expense attached, competition has been dwindling among Schneider entrants. In 1929 the Army and Navy refused to enter. Al Williams, Navy test pilot, backed by sportsmen, secretly constructed his plane “Mercury.” Tests made after spending some $150,000 proved disappointing. The wings were loaded a trifle too heavily and a larger set could not be installed in time to meet competition this year.

Williams and his backers definitely determined, through what some have though-lessly termed a failure, the limit a plane might be loaded per square foot of wing surface.

Major H.O.D. Segrave holds the world’s record for land speed. His Golden Arrow roared across Daytona sands at 231 m.p.h, last March. His car is cooled with ice, has streamlined pants to reduce the resistance of the wheels, and has a tail like an airplane to steady it. The car cost $75,000 to build.

The useful life of the Golden Arrow was just two hours of running. The racer showed that more streamlining was needed for greater speed, that the tires were good for but a mile or so at that speed, and that the limit with present materials had just about been reached.

There is some divine spark in men that prompts them, once they have set their hearts on a goal, to spare nothing until they achieve it. Gar Wood, of Detroit, foremost exponent of speed boat racing, has tried for twenty years and spent $3,000,000 in efforts to travel 100 miles an hour in a boat. He has nearly succeeded. His Miss America VIII has clocked off 93.27 miles an hour under official observation. It is rumored that next year he will install his two Packard 1500 h. p. engines, latest power plant to be acquired by him, in a boat similar to Miss America VIII, using hydrofoils, self-reefing planes, to automatically reduce resistance and top the coveted 100-miles an hour water mark.

The speed mania extends even to the building of ocean liners. Up until a year ago, size was the mark of distinction and smartness for ocean liners. Now it proves, since the epochal feat of the Bremen in lowering the Mauretania’s record of 5 days, 3 hours, to 4 days, 18 hours, that speed is being sought by travelers. Now building by Cunard, by White Star, and the French line are five rivals for ocean speed supremacy. Three are building in England and two in Germany. Men responsible for the building of these new four-day vessels say that modern transportation must answer needs of the traveling public whose tempo is tuned to getting places in a hurry.