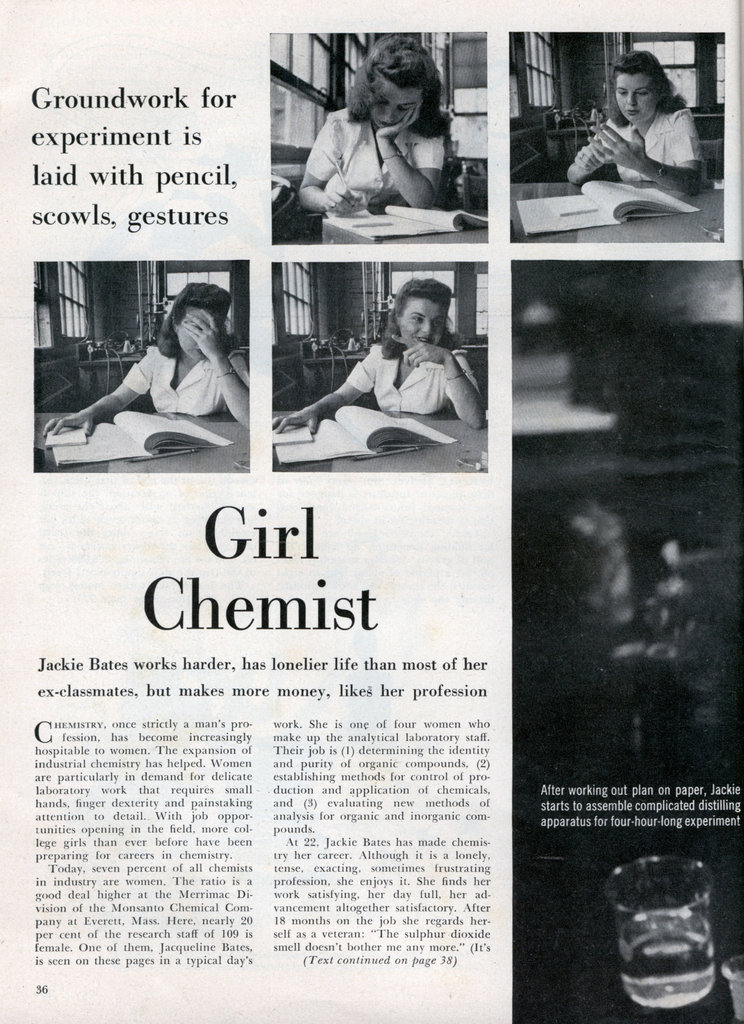 Jackie Bates works harder, has lonelier life than most of her ex-classmates, but makes more money, likes her profession

Chemistry, once strictly a man’s profession, has become increasingly hospitable to women. The expansion of industrial chemistry has helped. Women are particularly in demand for delicate laboratory work that requires small hands, finger dexterity and painstaking attention to detail. With job opportunities opening in the field, more college girls than ever before have been preparing for careers in chemistry.

Today, seven percent of all chemists in industry are women. The ratio is a good deal higher at the Merrimac Division of the Monsanto Chemical Company at Everett, Mass. Here, nearly 20 per cent of the research staff of 109 is female. One of them, Jacqueline Bates, is seen on these pages in a typical day’s work. She is one of four women who make up the analytical laboratory staff. Their job is (1) determining the identity and purity of organic compounds, (2) establishing methods for control of production and application of chemicals, and (3) evaluating new methods of analysis lor organic and inorganic compounds.

At 22. Jackie Bates has made chemistry her career. Although it is a lonely, tense, exacting, sometimes frustrating profession, she enjoys it. She finds her work satisfying, her day full, her advancement altogether satisfactory. After 18 months on the job she regards herself as a veteran: “The sulphur dioxide smell doesn’t bother me any more.” (It’s common at a sulfuric acid plant, but visitors unaccustomed to it notice it.) Jackie’s working day begins at 7:30, when Robert Voigt, a chemical engineer at the laboratory, picks her up at her home in Arlington, Mass., for the 15-mile drive to the huge, sprawling Monsanto plant on the outskirts of Boston. She makes a hurried change from street dress to white uniform and is at her post in the lab shortly alter eight. She works steadily through the morning with time out only for coffee, which she has in the lab. Lunch at noon comes on a tray from the company cafeteria, if experiments in progress cannot be left un-watched. Back at work before one, Jackie normally finishes her day by 4:45. Attractive, full of good humor, Jackie enjoys dancing, swimming, bowling and no shortage of male admirers. During her first year at Simmons College in Boston. Jackie planned to be a nurse after graduation, but by sophomore year shifted her interest to biology. In her third year she settled on chemistry. This choice withstood the test of a summer job at Monsanto, which convinced Jackie that she wanted to make chemistry her career. Personnel at the laboratory were impressed with her ability, and Monsanto again became her employer in July. 1947, after she had received her BS. The success of girl chemists like Jackie has opened another career door for college girls.