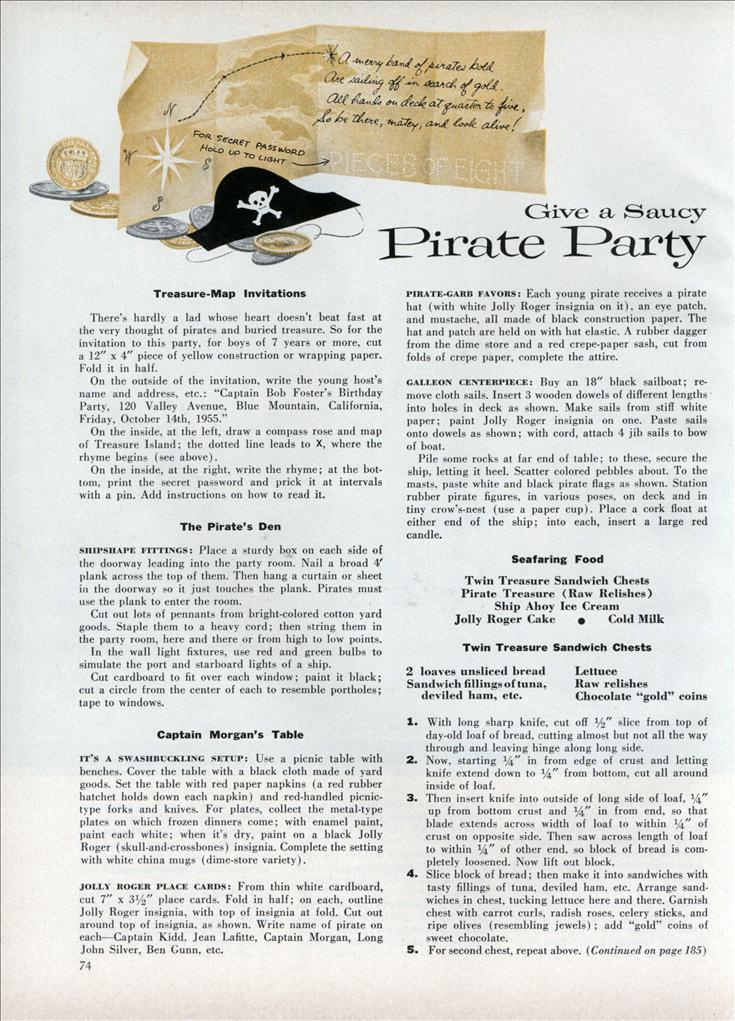 Give a Saucy Pirate Party

There’s hardly a lad whose heart doesn’t beat fast at the very thought of pirates and buried treasure. So for the invitation to this party, for boys of 7 years or more, cut a 12″ x 4″ piece of yellow construction or wrapping paper. Fold it in half.

On the inside, at the left, draw a compass rose and map of Treasure Island; the dotted line leads to X, where the rhyme begins (see above).

On the inside, at the right, write the rhyme; at the bottom, print the secret password and prick it at intervals with a pin. Add instructions on how to read it.

shipshape fittings: Place a sturdy box on each side of the doorway leading into the party room. Nail a broad 4′ plank across the top of them. Then hang a curtain or sheet in the doorway so it just touches the plank. Pirates must use the plank to enter the room.

Cut out lots of pennants from bright-colored cotton yard goods. Staple them to a heavy cord; then string them in the party room, here and there or from high to low points.

In the wall light fixtures, use red and green bulbs to simulate the port and starboard lights of a ship.

Cut cardboard to fit over each window; paint it black; cut a circle from the center of each to resemble portholes; tape to windows.

it’s a swashbuckling setup: Use a picnic table with benches. Cover the table with a black cloth made of yard goods. Set the table with red paper napkins (a red rubber hatchet holds down each napkin) and red-handled picnic-type forks and knives. For plates, collect the metal-type plates on which frozen dinners come; with enamel paint, paint each white; when it’s dry, paint on a black Jolly Roger (skull-and-crossbones) insignia. Complete the setting with white china mugs (dime-store variety).

pirate-garb favors: Each young pirate receives a pirate hat (with white Jolly Roger insignia on it), an eye patch, and mustache, all made of black construction paper. The hat and patch are held on with hat elastic. A rubber dagger from the dime store and a red crepe-paper sash, cut from folds of crepe paper, complete the attire.

Pile some rocks at far end of table; to these, secure the ship, letting it heel. Scatter colored pebbles about. To the masts, paste white and black pirate flags as shown. Station rubber pirate figures, in various poses, on deck and in tiny crow’s-nest (use a paper cup). Place a cork float at either end of the ship; into each, insert a large red candle.

1. With long sharp knife, cut off 1/2″ slice from top of day-old loaf of bread, cutting almost but not all the way through and leaving hinge along long side.

2. Now, starting 1/4″ in from edge of crust and letting knife extend down to 1/4″ from bottom, cut all around inside of loaf.

3. Then insert knife into outside of long side of loaf, 1/4″ up from bottom crust and in from end, so that blade extends across width of loaf to within 1/4″ of crust on opposite side. Then saw across length of loaf to within of other end, so block of bread is completely loosened. Now lift out block.

5. For second chest, repeat above.

2. Quickly halve each very firm pint of brick ice cream into 2 lengthwise oblongs; cut corners from front end of each oblong to form bow of ship.

3. Into each oblong, insert 2 candy-stick sails: then press 2 or 3 small round candies with holes in the center into each side for portholes.

PIRATE_GOLD: As guests arrive, each gives the secret password, then draws a name tag bearing one of the pirate names on the Jolly Roger Place Cards (page 74). Each guest pins on his name tag and receives a bag of chocolate “gold” coins or marbles. Anyone failing to call a guest by his pirate name during the party forfeits a “gold” coin.

WALK THE PLANK: Lay a plank flat on the floor; at the end of it, place a small tub of water. As soon as each guest has assumed his pirate name, give him a trial run and let him walk the plank, then jump over the tub of water with ease.

Now blindfold the victim; while he is being blindfolded, the water is quietly removed. It is very comical for the guests who have already gone through the ordeal to watch each one cautiously edge his way out on the plank, then jump wildly into the air, momentarily expecting to land with a splash.

PIRATE HIDEOUT: The child who is Captain Kidd for the afternoon hides while the others slowly count to 25. Then all scatter and hunt for Captain Kidd in his pirate’s den. As soon as one player finds the Captain, he doesn’t say a word but hides right along with him. And so it goes until all have found Captain Kidd. The first one to discover the Captain’s hideout becomes the next person to hide.

TREASURE HUNT: Before the party, the young host fills a treasure chest with chocolate “gold” coins and hides a silver fifty-cent piece at the bottom.

For each pirate, the host prints, on torn pieces of brown paper, a different set of 3 clues, each giving directions on how to find the next clue; then he prints a fourth clue, which is the same for all. He puts all the first clues into a bag, hides the rest as directed, and finally hides the treasure chest itself in the “West.” Here’s a sample set of clues: 1. Yo ho ho and a pirate ship, In the piano bench you’ll find a slip.

3. Look under the rug; step lively will ya, You’ve been double-crossed by Long John Silver.

4. And now, young man, go West, go West, The treasure’s in the treasure chest. At the party, each pirate draws his first clue from the bag. It leads him to the next, etc., and finally to the treasure.

The winner must turn in all 4 clues. His prize is the fifty-cent piece. All share the “gold.”