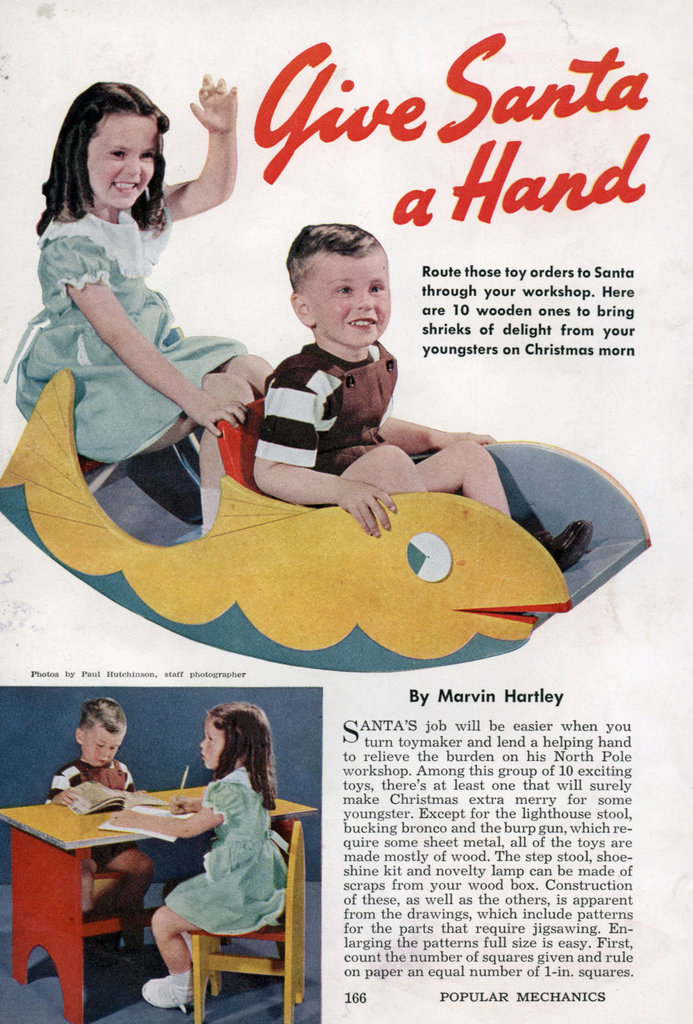 Give Santa a Hand

Route those toy orders to Santa through your workshop. Here are 10 wooden ones to bring shrieks of delight from your youngsters on Christmas morn

SANTA’S job will be easier when you turn toymaker and lend a helping hand to relieve the burden on his North Pole workshop. Among this group of 10 exciting toys, there’s at least one that will surely make Christmas extra merry for some youngster. Except for the lighthouse stool, bucking bronco and the burp gun, which require some sheet metal, all of the toys are made mostly of wood. The step stool, shoe-shine kit and novelty lamp can be made of scraps from your wood box. Construction of these, as well as the others, is apparent from the drawings, which include patterns for the parts that require jigsawing. Enlarging the patterns full size is easy. First, count the number of squares given and rule on paper an equal number of 1-in. squares.

Next, number the rows of squares 1, 2, 3, etc., across the top and down one side of both the magazine pattern and the ruled paper. Now, begin enlarging the pattern by drawing that portion of the outline which is in square No. 1 in the magazine in the corresponding square on your ruled paper. Then advance to the next square, and so on, until the complete pattern is enlarged. With practice, you’ll find it easy to enlarge any pattern by the square method.

With the exception of the table-and-chair set, which should be made of plywood, common 3/4-in. white pine is ideal material for practically all of the toys. Although the sides of the fish rocker were originally cut from wide solid stock, with the fins being added separately, they can be made in one piece by using plywood. Likewise, the hind leg of the bucking bronco, which shows the tail as a separate piece, can be of plywood. Duplicate parts of the various toys, such as the sides of the bodies, the legs, etc., can very well be cut at one sawing, thus assuring identical members. This is especially advisable if a bandsaw is being used. The pieces are simply tacked together in the waste areas and the work cut in multiple. In sawing duplicate parts, such as the clown hands, sides of the bronco body and fish rocker, you automatically produce a permanent pattern by simply inserting a sheet of thin cardboard or plywood in the stack of pieces being cut. Thus, when the sawing has been completed, you will have cut a full-size pattern at the same time. This is especially worth remembering if you plan to mass-produce any one of the toys in large quantities.