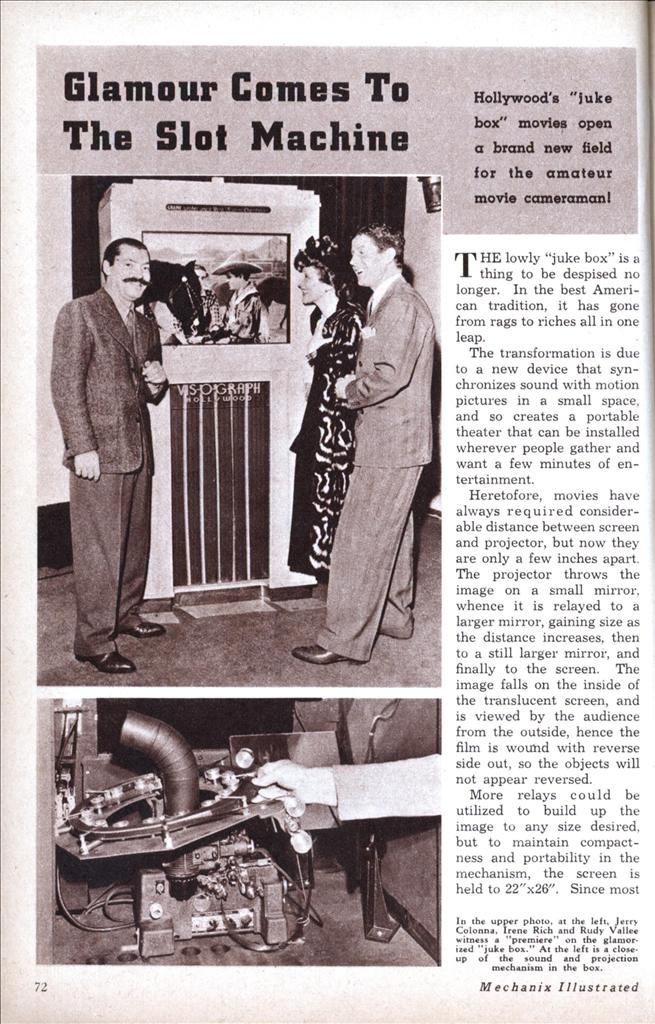 Glamour Comes To The Slot Machine

Hollywood’s “juke box” movies open a brand new field for the amateur movie cameraman 1 THE lowly “juke box” is a thing to be despised no longer. In the best American tradition, it has gone from rags to riches all in one leap.

The transformation is due to a new device that synchronizes sound with motion pictures in a small space, and so creates a portable theater that can be installed wherever people gather and want a few minutes of entertainment.

Heretofore, movies have always required considerable distance between screen and projector, but now they are only a few inches apart. The projector throws the image on a small mirror, whence it is relayed to a larger mirror, gaining size as the distance increases, then to a still larger mirror, and finally to the screen. The image falls on the inside of the translucent screen, and is viewed by the audience from the outside, hence the film is wound with reverse side out, so the objects will not appear reversed.

More relays could be utilized to build up the image to any size desired, but to maintain compactness and portability in the mechanism, the screen is held to 22″x26″. Since most of the audience will view the showing at close range, this makes a very satisfactory size.

Like the “blind” phonograph this machine seems destined to replace, it is operated simply by inserting coins—nickels, dimes, or quarters. Ten cents brings three minutes of time—nine minutes for a quarter— or about the same time that it takes to play through a phonograph record. The cost is twice as much, but the added attraction of visual entertainment is expected to make it more than worth the cost.

So new is the instrument that manufacturers are not as yet certain what they will feature for their attractions. So far, they are going in for a variety of subjects, all brief and snappy-singers, bands, sport features, and miniature reviews. The animated cartoon is almost certain to be included later.

And so at long last, it looks as if the old troupers may dust the cobwebs off their make-up kits. Vaudeville seems to be coming back, a newer, snappier, peppier vaudeville that will be made profitable by mass production and mass showing methods.

Tremendous opportunities for the public in general to cash in and begin profitable careers will be afforded. Amateur 16 mm. movie cameramen will have a chance to sell their wares at excellent prices—if they can deliver the high quality work that will be required. They will be competing with some of the finest cameramen in Hollywood, but if they can meet this challenge, they will find themselves making a good living or a substantial subsidiary income. The demand for film is going to be enormous—like nothing Hollywood has ever seen.

Amateurs who have sound recording equipment will have some advantage over their ”mute” fellows, for all of these shorts contain a sound track, which furnishes music or sound effects. But those without such expensive equipment need not feel themselves at too great a disadvantage. If the material is acceptable, sound engineers can easily “dub in” effects on the track.

Likewise, the cross-roads Hedy Lamarr, who thinks she lacks only a break to become famous need no longer trek to Hollywood or Broadway and endure months of heartbreak away from home while she awaits the Big Chance. A good amateur 16 mm. movie photographer can make a few feet of her doing some snappy act, send it along, and if film editors think she has appeal, they will send it forth for public judgment. Again sound is advantageous, but not, in every case,] essential. When her voice is important, she I can have a record made for a dollar or so at any sound recording studio, and when release is made, it will have been dubbed into the track.

Producers, indeed, will be quite happy if someone will assume their production and talent worries. Some few problems are presented. Due to the small screen and limited time, there will be no miniature super-colossals. No mob scenes, no long lines of dancers, no sets that are breath-taking for their sheer size and splendor. Sets are being built in miniature for all kinds of backgrounds: snow, sea, desert and mountains. Often they are just simple boxes, on which the backgrounds have been cleverly painted. Powerful lantern slides, projected on a screen, often produce the desired results. So the ambitious amateur need not complain about lack of setting. The inside of his garage, a little canvas, and a few pots of paint are all he will need.

Another more technical problem is to make possible the selection of whatever short the coin-dropper wishes to see. At present, he has to take what he gets—and Benny Goodman fans are apt to be perturbed if their money brings them Leopold Stokowski, a sentiment in which Stokowski fans reciprocate with compound interest. Since the shorts are eight to a reel, it might cost as much as seventy cents to see what you want.

Technicians are working now on devices which will turn the reel to any selection desired, and before long, they should have it.

But the “bugs” are rapidly being ironed out. The device is successful, and will be a moneymaker, as it now stands. Making and showing of these shorts is going to be a great industry.

The humble “juke box” is going to take its place with motion pictures, radio, and sports as our chief mediums of entertainment.

What do you say we pop down to the drug store and see a movie?