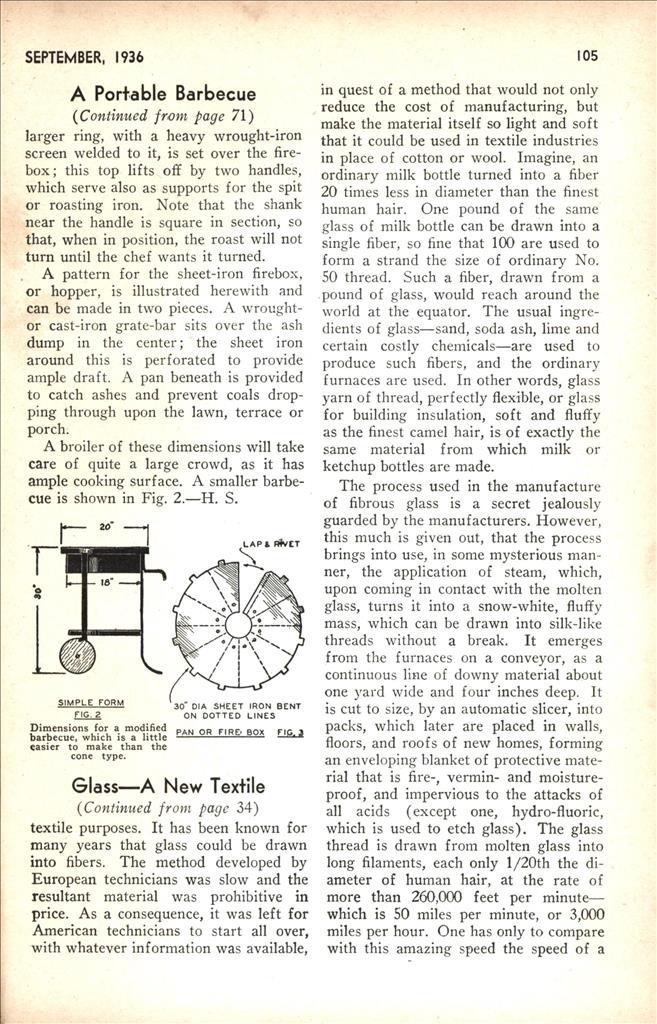 The history of glass dates back many centuries before the birth of Christ. Like many other inventions, its discovery was by an accident. The legend has it that a group of Phoenician travelers, while camping out for the night on the shore, built a big fire to prepare their food and keep warm. Next morning, they discovered that a new gleaming ma- terial had formed in the midst of the ashes; thus, we have the earliest account of how glass was discovered. Europe gave the secret of glass making to this country, enabling eight Dutch glass blowers to i erect a factory in colonial Jamestown, Va., in 1609, glass manufacturing thus becoming the first industrial enterprise on Ameri- can soil. Exactly 294 years later, in 1903, an American showed the world how to produce glass bottles for the first time with machinery. The man who effectuated the invention of the first bottle machine was the late Michael J. Owens. The men who worked for this pioneer of American glass industry have given back the loan to the Old World in the form of another far-reaching development in vitreous products— fibrous glass. It is a peculiarly interesting situation, inasmuch as fibrous glass, like glass in most other forms, was first produced in Europe. Yet, only last January, glass manufacturing interests in Dusseldorf, Germany, bought two machines in the United States —one to produce fibrous glass and the other to make such glass available as thread and yarn for textile purposes. It has been known for many years that glass could be drawn into fibers. The method developed by European technicians was slow and the resultant material was prohibitive in price. As a consequence, it was left for American technicians to start all over, with whatever information was available, in quest of a method that would not only reduce the cost of manufacturing, but make the material itself so light and soft that it could be used in textile industries in place of cotton or wool. Imagine, an ordinary milk bottle turned into a fiber 20 times less in diameter than the finest human hair. One pound of the same glass of milk bottle can be drawn into a single fiber, so fine that 100 are used to form a strand the size of ordinary No. 50 thread. Such a fiber, drawn from a pound of glass, would reach around the world at the equator. The usual ingredients of glass—sand, soda ash, lime and certain costly chemicals—are used to produce such fibers, and the ordinary furnaces are used. In other words, glass yarn of thread, perfectly flexible, or glass for building insulation, soft and fluffy as the finest camel hair, is of exactly the same material from which milk or ketchup bottles are made.

The process used in the manufacture of fibrous glass is a secret jealously guarded by the manufacturers. However, this much is given out, that the process brings into use, in some mysterious manner, the application of steam, which, upon coming in contact with the molten glass, turns it into a snow-white, fluffy mass, which can be drawn into silk-like threads without a break. It emerges from the furnaces on a conveyor, as a continuous line of downy material about one yard wide and four inches deep. It is cut to size, by an automatic slicer, into packs, which later are placed in walls, floors, and roofs of new homes, forming an enveloping blanket of protective material that is fire-, vermin- and moisture-proof, and impervious to the attacks of all acids (except one, hydro-fluoric, which is used to etch glass). The glass thread is drawn from molten glass into long filaments, each only 1/20th the diameter of human hair, at the rate of more than 260,000 feet per minute— which is 50 miles per minute, or 3,000 miles per hour. One has only to compare with this amazing speed the speed of a Springfield army rifle bullet, which is approximately 52,000 feet per minute muzzle velocity.

The fibrous glass laboratory at Newark, Ohio, is now experimenting with glass thread and yarn in colors. Thus far, white, blue, black and red fibers have been successfully produced. The great advantage of these colored glass fibers is that they are fadeproof; since they are neither dyed nor stained into the material. It is expected that, as a result of this colored thread development, manufacturers in textile industries will soon be able to weave rugs, blankets, curtains and hundreds of other materials from ordinary colored glass-wool, thus reducing fire hazards in homes, theatres, offices and many other public places.

The acoustical properties of fibrous glass insulation have already attracted motion-picture sound crews of the West Coast studios. Mats of insulation glass are used on the stages, and moved from one place to another to soften sound; being fireproof, the material is especially desirable at the studios of radio, stage and motion pictures.

Tests have shown that, in glass insulated homes not equipped with air-conditioning units, rooms are kept from eight to ten degrees cooler than outside daytime temperatures by merely opening windows at night and closing them early in the morning. The material weighs only 1-1/2 pounds per cubic foot for the density used in homes.

In winter, heating costs in homes so insulated are cut from 30 to 40 per cent. Warm air cannot escape, and smaller furnaces can be used; thus lessening the initial heating unit cost, while less fuel is needed. For homes already built, such insulation can be easily installed; the glass packs are reduced to tiny pellets, which are forced between walls merely by cutting a small hole to insert a hose connected with a blower.

The glass insulation also is coming into use in the form of metal-mesh blankets to wrap around boilers and other places where it is desired to stop excessive heat flow; and packs of it are used to wrap steam and hot-water pipes and hot-air ducts. Two types are being made, one to withstand temperatures up to 1,000 degrees Fahrenheit, and the other for temperatures up to 200 degrees Fahrenheit.

The glass insulation blankets are now available with poultry netting or expanded metal on both faces; they can be obtained also with metal-mesh only on one side. The resulting soft face fits snugly over irregularities, bolts and rivet heads. The insulation is held to the metal mesh with pure glass yarn, eliminating the corrosion and wasteful heat flow common to wire ties. Any desired finish may be used over the glass blankets for pipe covering.

Another use for glass fiber is in the so-called air-filters; these are made about two inches thick, and sprayed with an odorless, non-evaporating chemical adhesive. Properly encased, they are installed in warm air furnaces and ventilating systems generally. This produces the cleanest form of heat, because the air is cleaned of all dust, pollen and other foreign matter, thus eliminating soiled walls above registers, keeping home furnishings brighter, and stores, dairies and other establishments free of ruinous dust.

Such filters are also used for internal combustion engines, to protect the cylinders against abrasive dusts that lead to costly repair and replacement.

These are only a few items in which the fibrous glass is used. A year from now, according to the manufacturers, it is predicted there will be not a few mannequins parading on Easter Sunday, dressed up entirely in latest Parisian fashions—all of fibrous glass.