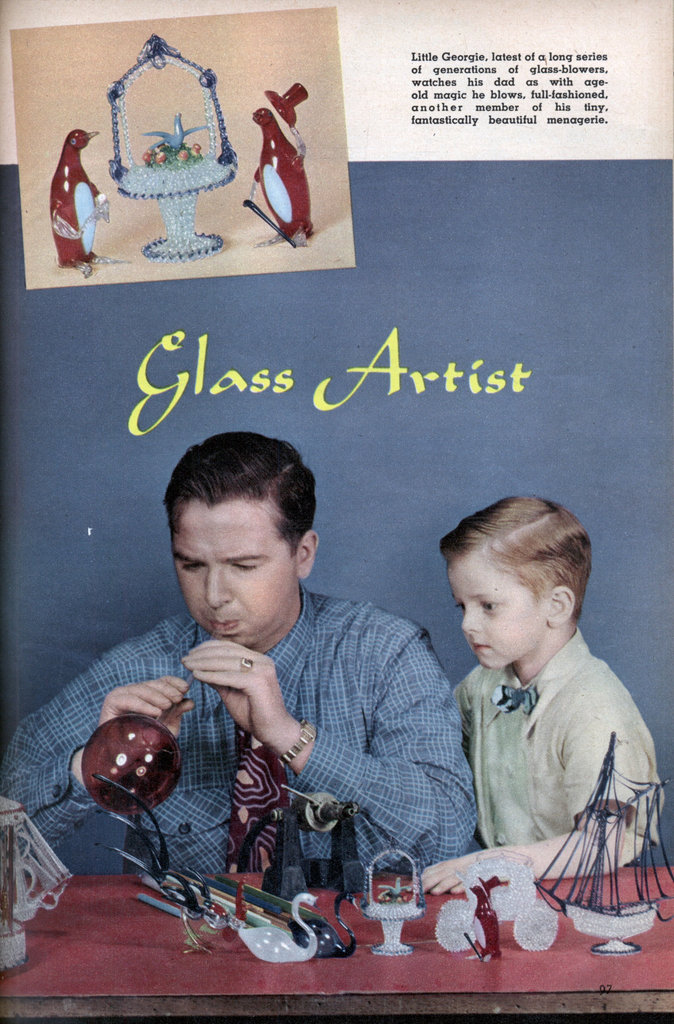 For centuries the Hammesfahr family has been blowing rods of glass info wee objects of art.

THE place is a Brooklyn workshop, the year, 1947. George Hammesfahr blows gently into the hollow glass rod and a wine-red bubble puffs slowly outward from the middle of the hot, pliable glass. The bubble grows, the deep red mellows into a soft vermilion as it presents a larger surface to the light. Deep inside the bubble a vision starts to take shape, a mind’s eye vision which only George can see. …

The place is a workshop in old Bohemia, back in the middle ages.

A gnarled craftsman heats a glass rod over a flame, blows into it and begins to mold fantastically tiny objects from the brilliantly-colored glass. He works swiftly, deftly, shaping little creatures with a deft flick of the wrist, a sharper breath. The flickering candle on the workbench lights his seamed face as admiring villagers stare through the frost-encrusted panes in the night outside. They nudge each other and whisper, “That’s old man Hammesfahr, the Glass Man. Well does he know his craft, better than any in old Bohemia. He is passing his secrets down to his children and his children’s children, so they too shall know. . . .”

The vision fades. George works on.

Outside, a group of urchins and several passersby stare through the windows of the small Brooklyn store in the gathering twilight. Centuries have passed, but the picture which George had conjured up in his mind recreates itself. Because the famed glass blower of another year had passed the secret of his art down through the generations and across the sea to this descendant, who plies his craft today with the same dexterity and with practically the same methods.

Inside the room as George works is his small son, sturdy five-year-old George Hammesfahr III. He is already learning the art and has begun to fashion simple models. Hovering near is George’s wife, who had never seen a glass figurine outside ,of a store until she married George ten years ago. Now she too has become adept at the art; in fact, as Mr. and Mrs. Glass, they have toured the country several times, giving exhibitions in fairs and department stores.

Right now the descendants of old man Hammesfahr are scattered all over the nation, all masters of the old method. At least four families live and work in Brooklyn, one is in California, and numerous cousins are in the middle west.

Watch George in action as the little moppet stands at his father’s elbow, bug-eyed in admiration. He works with the simplest of equipment, as did the founders of the Bohemia craft. Bohemia-type glass blowing differs from other varieties in that it consists of shaping only the tiniest and most delicate objects without using molds or elaborate tools or large furnaces to melt the glass. Bohemia style shies away from the beautiful but larger vases and bottles fashioned by the Venetian school and confines itself to objects which can be covered by the palm of the hand.