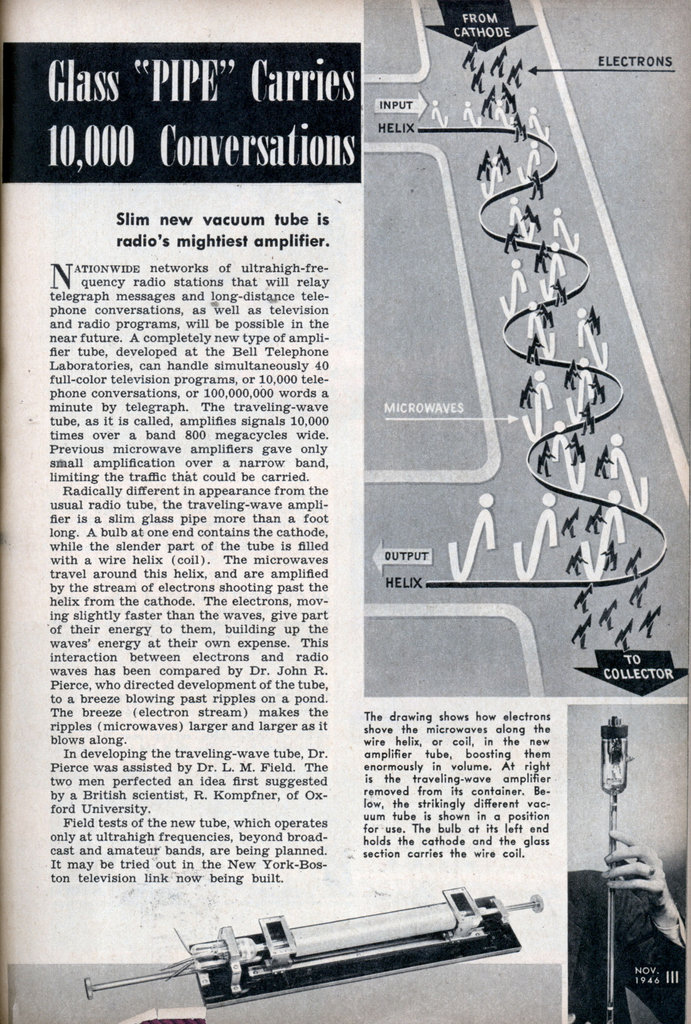 Nationwide networks of ultrahigh-frequency radio stations that will relay telegraph messages and long-distance telephone conversations, as well as television and radio programs, will be possible in the near future. A completely new type of amplifier tube, developed at the Bell Telephone Laboratories, can handle simultaneously 40 full-color television programs, or 10,000 telephone conversations, or 100,000,000 words a minute by telegraph. The traveling-wave tube, as it is called, amplifies signals 10,000 times over a band 800 megacycles wide. Previous microwave amplifiers gave only small amplification over a narrow band, limiting the traffic that could be carried.

Radically different in appearance from the usual radio tube, the traveling-wave amplifier is a slim glass pipe more than a foot long. A bulb at one end contains the cathode, while the slender part of the tube is filled with a wire helix (coil). The microwaves travel around this helix, and are amplified by the stream of electrons shooting past the helix from the cathode. The electrons, moving slightly faster than the waves, give part of their energy to them, building up the waves’ energy at their own expense. This interaction between electrons and radio waves has been compared by Dr. John R. Pierce, who directed development of the tube, to a breeze blowing past ripples on a pond. The breeze (electron stream) makes the ripples (microwaves) larger and larger as it blows along.

Field tests of the new tube, which operates only at ultrahigh frequencies, beyond broadcast and amateur bands, are being planned. It may be tried out in the New York-Boston television link now being built.