Popular Mechanics
Issue: Jan, 1924
Posted in: How to
Tags: art
No Comments on Glories of Mankind Told in Art-Glass Windows (Jan, 1924) 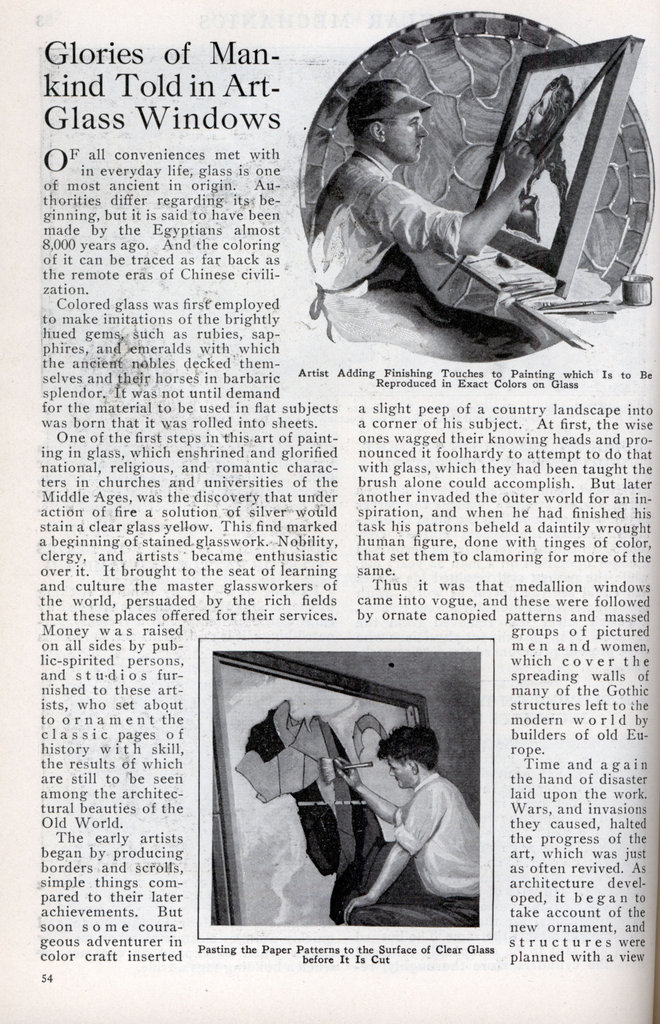 OF all conveniences met with in everyday life, glass is one of most ancient in origin. Authorities differ regarding its- beginning, but it is said to have been made by the Egyptians almost 8,000 years ago. And the coloring of it can be traced as far back as the remote eras of Chinese civilization.

Colored glass was first employed to make imitations of the brightly hued gems, such as rubies, sapphires, and emeralds with which the ancient nobles decked themselves and their horses in barbaric splendor. It was not until demand for the material to be used in flat subjects was born that it was rolled into sheets.

One of the first steps in this art of painting in glass, which enshrined and glorified national, religious, and romantic characters in churches and universities of the Middle Ages, was the discovery that under action of fire a solution of silver would stain a clear glass yellow. This find marked a beginning of stained glasswork. Nobility, clergy, and artists ‘ became enthusiastic over it. It brought to the seat of learning and culture the master glassworkers of the world, persuaded by the rich fields that these places offered for their services. Money was raised on all sides by public-spirited persons, and studios furnished to these artists, who set about to ornament the classic pages of history with skill, the results of which are still to be seen among the architectural beauties of the Old World.

The early artists began by producing borders and scrolls, simple things compared to their later achievements. But soon some courageous adventurer in color craft inserted a slight peep of a country landscape into a corner of his subject. At first, the wise ones wagged their knowing heads and pronounced it foolhardy to attempt to do that with glass, which they had been taught the brush alone could accomplish. But later another invaded the outer world for an inspiration, and when he had finished his task his patrons beheld a daintily wrought human figure, done with tinges of color, that set them to clamoring for more of the same.

Thus it was that medallion windows came into vogue, and these were followed by ornate canopied patterns and massed groups of pictured men and women, which cover the spreading walls of many of the Gothic structures left to the modern world by builders of old Europe.

Time and again the hand of disaster laid upon the work.

Wars, and invasions they caused, halted the progress of the art, which was just as often revived. As architecture developed, it began to take account of the new ornament, and structures were planned with a view to admitting the art window into their designs. Thus greater demand was put upon the creators of these fantastic affairs. Vying with one another, they spurred to higher aims. Masterpieces resulted, and fresher subjects were wrought into the windows. Many of the creators of these failed to leave any certain identification, and a number of the finest specimens which delight present-day tourists in the Old World, bear no marks by which their modelers can be credited.

Each set of artists had their own style. As these impressed those who could afford to have such marks of luxury to distinguish them and their houses, importations of foreign craftsmen became the practice. Spaniard and Italian invaded France, seeking a market for their services, and in turn the Frenchman passed with his art into other countries.

Often, to the leaders among them, entire windows were given over by their owners for the illustration of some heraldic figure set in imitation of a noble who generally desired to be remembered in this way by those destined to take over his house and his lands after his demise.

Many of the faces of the earlier figures that entered into these patterns were distorted, owing to the inability of the designer to produce in glass and colors with equal detail, what he could set down on canvas. They frequently were incorrectly posed and assumed grotesque positions, vastly unlike the original drawings that first appeared on paper. Other figures were not properly proportioned.

As in the olden times, the present-day artist in stained glass first paints the picture he is to reproduce on paper or canvas. From this original a pattern is made of the same material with the shapes of the inlays drawn to their exact sizes. Double-lipped shears then trim a narrow strip along each line, separating the sections as they are to be after the lead or zinc joints are in place. Glass of the required shades is then selected and cut into bits of the shapes and sizes of the paper pieces.

After they are put in place on a skeleton easel, they undergo a sort of critical test as to arrangement of ground color, lights, and shadows. This test is always made against a northern light, since an even blend of the sun’s rays is available, from that direction.

Though the opening chapter of the history of stained glass seems to have taken place some time in the Middle Ages, when colored windows were made as a kind of story-book picture, few changes have since been adopted. Steel tools have replaced diamonds for cutting, and zinc occasionally is used instead of lead for joints. The invention of the double-lipped shears used in cutting the patterns out of paper is said to be the only other new implement in an industry that was old long before America was discovered.