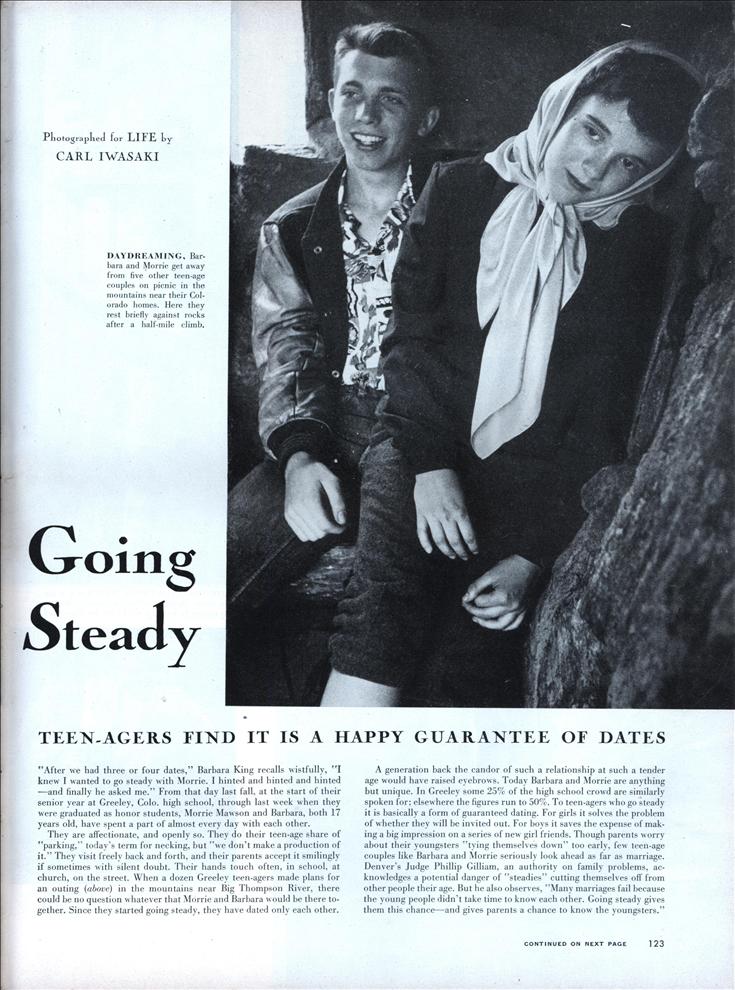 TEEN-AGERS FIND IT IS A HAPPY GUARANTEE OF DATES

Photographed for LIFE by CARL IWASKI

“After we had three or four dates,” Barbara King recalls wistfully, “I knew I wanted to go steady with Morrie. I hinted and hinted and hinted —and finally he asked me.” From that day last fall, at the start of their senior year at Greeley, Colo, high school, through last week when they were graduated as honor students, Morrie Mawson and Barbara, both 17 years old, have spent a part of almost every day with each other.

They are affectionate, and openly so. They do their teen-age share of “parking,” today’s term for necking, but “we don’t make a production of it.” They visit freely back and forth, and their parents accept it smilingly if sometimes with silent doubt. Their hands touch often, in school, at church, on the street. When a dozen Greeley teen-agers made plans for an outing (above) in the mountains near Big Thompson River, there could be no question whatever that Morrie and Barbara would be there together. Since they started going steady, they have dated only each other.

A generation back the candor of such a relationship at such a tender age would have raised eyebrows. Today Barbara and Morrie are anything but unique. In Greeley some 25% of the high school crowd are similarly spoken for; elsewhere the figures run to 50%. To teen-agers who go steady it is basically a form of guaranteed dating. For girls it solves the problem of whether they will be invited out. For boys it saves the expense of making a big impression on a series of new girl friends. Though parents worry about their youngsters “tying themselves down” too early, few teen-age couples like Barbara and Morrie seriously look ahead as far as marriage. Denver’s Judge Phillip Gilliam, an authority on family problems, acknowledges a potential danger of “steadies” cutting themselves off from other people their age. But he also observes, “Many marriages fail because the young people didn’t take time to know each other. Going steady gives them this chance—and gives parents a chance to know the youngsters.”

Barbara and Morrie have it better than some couples. They have known each other for years —Barbara once went out with Morrie’s older brother—and, subject to fairly rigid week-night hours, they have the approval of both parents. Appreciative of this confidence, the youngsters talk freely with their families about their reasons for wanting to go steady. Barbara says, “It’s happiness all the time and sometimes being miserable, too, but mostly it’s being happy together.” For his part, Morrie says, “It’s the way she looks at me.”

Their casual ardor is noticeable in such activities as homework (opposite page), a scene that made Morrie’s mother inquire, “If you kids want to neck, why don’t you neck? If you want TV, why don’t you watch TV, and if you want to study, why don’t you study? I don’t see how you can manage all three at once.”

With surprisingly mature understanding Barbara and Morrie make a point of doing little things for each other to show that they do not take each other for granted. Though Barbara says that golf is “nothing but walk, walk, walk,” faithfully she follows Morrie around when he plays (top left). And though Morrie would prefer to “tear like mad” when he is at the wheel of a car, he considerately holds the speed down when Barbara is along (above).

They like going around with other teen-age couples, whether to a throw-together dance (below) where they may be more engrossed in the “steadies’ clutch” than in their footwork, or to big events like a double date at Colorado Springs for a meal and a swim. Morrie’s mother went along with the four youngsters as chaperone but nobody seemed to mind, particularly when she offered to pay part of the $30 tab the boys had to square up before leaving.

A TIFF, A TRIBUTE

Spending so much time together leads to an occasional squabble (below), and when Barbara and Morrie spat they recite every imagined meanness that ever has marred their idyl. Seeking reassurance, one asks, “Do you still want to go steady?” and the answer usually is, “If you do.” The worst threat Morrie can fling is, “O.K., I’ll go back to the guys,” and then Barbara pleads, “Let’s not fight anymore,- ever.” When all is going well, Barbara will receive a “happy, happy” gift from Morrie (opposite page), the more welcome because its coming is utterly unpredictable.

The summer ahead is filled with some uncertainty. Though both have won college scholarships Barbara will work as a typist in Greeley while Morrie is away at Estes Park working in a restaurant to help pay future school expenses. They do not say it, but each is aware that next fall when they enter college everything may be different and they may find themselves going steady with a boy and a girl they now do not even know.