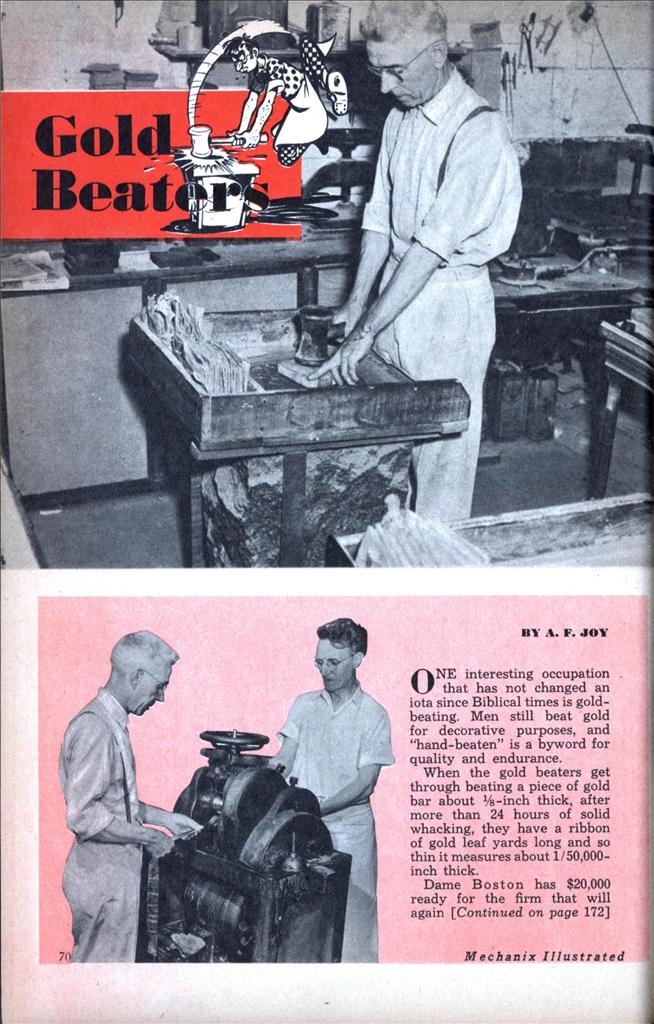 ONE interesting occupation that has not changed an iota since Biblical times is gold-beating. Men still beat gold for decorative purposes, and “hand-beaten” is a byword for quality and endurance.

When the gold beaters get through beating a piece of gold bar about 1/8-inch thick, after more than 24 hours of solid whacking, they have a ribbon of gold leaf yards long and so thin it measures about 1/50,000-inch thick.

Dame Boston has $20,000 ready for the firm that will again

gold-roll its State House dome, but the gold beaters who supply the all-important gold leaf are so short of help that all their limited production is now going to older customers.

Massachusetts’ famous gold State House dome was painted grey during the war and now awaits a new coat of the protective leaf. Gold leaf is hand-rolled by gold rollers in roof jobs like this. One of the firms supplying rollers with leaf is Chaplin and Horton, of Hyde Park, Mass. They will probably be able to let enough of their hand-beaten leaf go for the big State House job some time in October—they hope.

It takes a dozen operations to make gold leaf. Gold of 23-1/2 carat is used, half a carat less than pure gold, the difference being due to the addition of copper and silver to make it stronger and more workable. The gold is put in a crucible, melted, then poured into a mold which gives a four-ounce bar about 2 by 1-1/8 by 1/8 inches in size.

This small bar is fed about 20 times through an electric rolling mill until its original two inches is a ribbon 12 yards long and of the same width. From the 12 yards, 225 sheets 1-1/8 inches square are cut. Sheets at this stage are approximately 1/1000 inches thick.

The pack of 225 sheets is next placed in a cutch, a stack of vellum sheets (vegetable base paper), the gold sheets interleaved with the vellum. The cutch is placed in two parchment (sheepskin) cases which telescope into each other, resulting in a package roughly 4 by 4 by 5/8 inches.

First beating is done with a small wide-surfaced hammer weighing 18 pounds. The pounding is done on a granite block. About 90 blows a minute are struck, and beating is kept up for three-quarters of an hour.

This beating flattens the gold into thinner and wider sheets which give 900 sheets when cut down to their original size. In other words, the first beating results in four times the original amount of leaf.

Each of these sheets is cut up into four squares, and this time they are divided and placed in three five-inch-square molds. The molds are also of cowgut, but a cleaner, finer and tougher variety than the shoder. Mold skins are brushed with sal ammoniac powder, a rabbit’s foot being used as the spreader. (The rabbit’s foot is not for luck. It’s used because it is economical, it wears practically forever, it is of the right softness, and it

spreads the powder evenly. Powder must be used at this stage to prevent the gold from sticking to the skins.) Each mold now holds about 1100 sheets.

Next, these three molds are soundly pounded for four hours each. In this pounding, the two-inch-square sheets spread again to five inches square. They are now transparent. They are about 1/50,000-inch thin, and so frail that a brush of the finger shreds them.

Special tools are now required to handle the gold sheets. Boxwood pincers, resembling chop sticks, are used to pick them up. Each sheet is very carefully placed on a cushion of leather for trimming.

The trimming tool is a special one, too. It is called a “wagon.” This wagon is a boxwood contrivance consisting of two adjustable cutting blades. The cutting blades are reeds of imported malacca cane which when sharpened take a very fine edge, cutting the gold cleanly.

The final operation, called booking, is also a ticklish job. The gold leaf sheets are picked up with the boxwood pincers and placed in paper binders. A book consists of 25 gold sheets between paper.

Chaplin and Horton put out a special roll leaf for such jobs as state house domes. The leaf is rolled into paper to which it adheres, forming rolls 67 feet long and varying in widths up to four inches. This allows gold rollers to transfer leaf in a high wind with little fuss or loss of leaf. Such leaf is called transfer gold. Transfer gold not only enhances the appearance of a rooftop, but it acts as a ten-year protector in any kind of weather.

Why hand-beat the gold? According to these experts, who have been at it since 1906, you just can’t beat hand-beaten gold leaf! (Their pun, not the writer’s.) Yes, the trip hammer is used, they admit, but even with a machine the final beats are by hand. Everyone seems to ask for hand-beaten gold.

Twenty-five years ago there were 90 beaters around Boston. Now there are only half a dozen, which accounts for the local bottleneck in production, which in turn explains why the dome of the capitol must wait.

Right now the leaf men can’t keep up with the demand, but that does not mean they want more apprentices. It seems that today’s apprentices can’t stand that 18-pound hammer and all that steady beating. They always seem to fold up and quit the job. Could it be they don’t like muscles? •