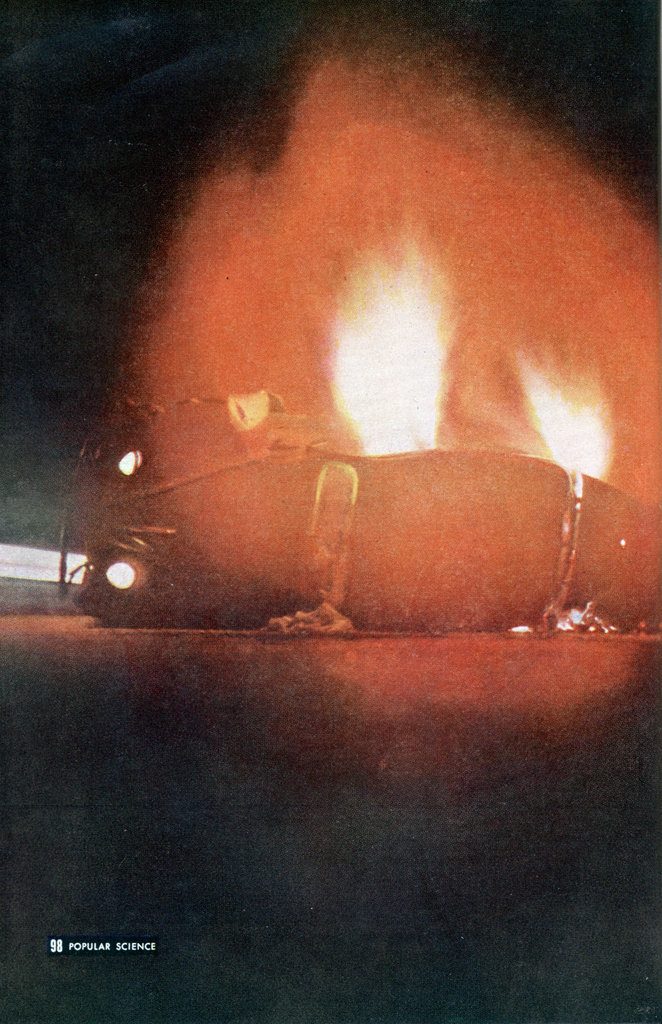 Good Driving Is a Habit

How to teach your family the Seven Keys to Safety

This Can Happen to YOU…
This month’s cover painting is an illustrated statistic. Driving 30 miles an hour is as dangerous as driving on the roof of a high building! If you hit another car head on going at the same “safe” speed, it would be like driving off a nine-story building.

THE driver of a suburban bus outside Detroit was rolling along at a moderate rate the other day when suddenly he hauled on the wheel and swerved. The maneuver was puzzling. Except for some snow-covered cars parked by the right-hand curb, the road was clear.

As I stepped off the bus I asked him about it.

“Oh, that!” he replied. “Well, as we came up to that line of parked cars, I saw the snow on the hood of one of them begin to slide off. I figured his engine was running and maybe he was getting ready to pull away from the curb. I wasn’t taking any chances.”

That bus driver was a good driver. He made good driving a habit. He knew he had to. It’s no longer possible to make each move in driving a conscious move. Speeds have become too fast for that. Stopping distances are too great. Safety on the highway demands practice until the proper reaction in an emergency becomes automatic.

The first thing to teach your family about the operation of the family car is that good driving must be habitual. Good driving includes keeping a constant lookout for what the other fellow is going to do.

Slip into the right-hand front seat of the family jalopy and have your student settle himself comfortably behind the wheel. We’ll . assume that he knows the rudimentsâ€”how to depress the clutch, shift, brake, and steer. Knowing how to manipulate the controls is the least of knowing how to drive. Now let’s take it from there.

Pulling from the Curb

Make your student keep his clutch depressed until he has looked backward out of the window and forward up the street for other cars. Don’t let him rely on his rearview mirror. It only shows about three-fourths of the road. Explain that to him. You know that, but he doesn’t. And watch out for pedestrians, too. Stick out that hand. Other motorists must know what your car is going to do before it does it. It’s too late after the crash. Ease out, now, in low. Shift carefully, accelerate slowly.

Make your student develop the habit of driving ahead of himself. Say to him, “Imagine you’re sitting on the front bumper. You’d keep looking ahead to see what was coming, wouldn’t you?” There’s a car at the curb. Its exhaust pipe spits a puff of smoke. The engine must be running. Its driver may pull into the street. Ease by, watchful. There’s another car parked just ahead of it. Its front wheels are turned out. Is it going to pull away from the curb?

A kid’s ball bounces into the street. Use the brake. Don’t wait to see if a kid follows. Take that for granted. Slow down.

“Watch every other car in the intersection and every car that can reach the intersection before you leave it. Some dope in a hot rod may come screeching through. Look at that line of cars to the right now. If one of them tries to pass another one inside the intersection, put out your hand and stop. Let the fool get out of the way before you move. And in stopping, don’t jam on the brake. The car behind you may smack into your rear end. That could well-nigh break your neck.”

Tell your student to make it a habit to keep his eye peeled for clues to what the other fellow is going to do. Front wheels on the roll telegraph a lot of information. The car coming into the intersection just opposite you is slowing. Its wheels turn just a shade. Its driver is going to make a turn. Easy, that may mean a full stop for you to let him get out of the way.

Stop for a Talk

When you get through the intersection have your student pull over to the curb for a talk. How fast was he going as he approached the intersection? Twenty. That sounds safe. But does he have any idea how far his car would travel in a half-second at 20 miles an hour? The answer is fourteen feet. And what’s the half-second for? Well, that’s how long it would take him to react to an emergency. Fourteen feet can be the difference between safety and collision.

A moment ago you warned him against drivers who tried to pass within the intersection. Why? Well, supposing he himself tried to pass another car that had slowed down. The other car may have slowed down to let a pedestrian cross in front of him. Could he avoid the pedestrian? Or the other driver may have been looking for a cross street. If he found it, the chances are he would swing hard left. How much chance would he have to avoid a collision? Or the other driver may have spotted a car on the cross street coming in fast. If your student had been passing, would he have been able to stop in time?

Try another intersection. Here, a streetcar going in the same direction stops as you approach. Ask your student, “Know what may happen if you barge on into that intersection? Another car may come in fast on you from the left. The streetcar hides it. What’ll the other driver doâ€”go under you, over you, or through you? Get the habit: STOP.”

Railroad tracks are intersections too. Roll your student up to a crossing. Where it says stop, it means STOP. Trains use wheels too, and anything on wheels is potentially dangerous. Single track or double track? Look both ways. The tail end of that passenger train rumbling by may hide the head end of a freight a hundred feet away. Wait. You may spend 30 seconds and save your life.

Practice making turns. Tell your student he must learn a habit of signaling. Make him learn to work his way into the proper lane minutes before he intends to make a turn. He must ease off on the accelerator several hundred feet ahead of his turn. He’ll learn that the braking power of his engine compression with the power off is one of his chief assets in car control.

Now for the turn. It’s you talking: “Swing left just short of the center of the intersection, if the law permits. That leaves room for drivers coming from the opposite direction who also want to turn left. Complete your turn just to the right of the cross street’s center line. See how this keeps the number of traffic lanes you have to cross at a minimum?”

Take your student out on the open road. Here’s space. He’s got a lot of horsepower under his foot and he aches to use it. If the road’s clear, let him. It satisfies an urge.

If your student is going to pass a car going 40 m.p.h., he should have about 1,000 feetâ€”or about 55 car lengthsâ€”between him and any car coming from the opposite direction before attempting it. And there’s a catch. These conditions hold good if the oncoming car is making about 45. They hold good if the pavement is dry, if the road is straight and level. If the pavement isn’t dry, tell him to double his estimate just for safety.

If there’s a hill or a curve, tell him to make it a habit to let up on that accelerator and keep his position.

He makes an experimental pass. The car gets by all right, but he cuts in too sharply in his anxiety to get back into the right-hand lane. “Wait,” you have to tell him, “until you can see some part of the car you’ve just passed appear in your rearview mirror. Then ease back into your lane.”

There was something else. Did he forget something? He looks blank. Did he look behind before he started to pass to see what traffic was following him? Did he put out his hand? No, he didn’t. Let those answers ride on the double zero for the next spin of the wheels without saying anything more. It’s effective.

“At night,” you can tell your student, “passing is more critical. Make it a habit to allow yourself more room. Be more critical of your judgment of speed. Flick your headlights to tip off the car ahead that you’re going around him.”

That speed itch is eating at the ball of your student’s right foot. You know it. The needle on the speedometer keeps creeping up. Let him go. Wait until she hits 50. Then tell him to brake to a stop as fast as he can and still keep the car under control. He starts braking. “Did you look behind?” you ask him. “Did you put out your hand in a slow signal?” No, he didn’t. Okay, just a reminder to make it a habit.

As the car snubs to a halt, ask him if he has any idea how much distance he ate up in stopping the car. No, he hasn’t. Then explain it to him: “It took you a total of almost a full city block to bring this jalopy to a stop from 50 miles an hour. But there’s something even more importantâ€”do you know how far your car traveled from the time I told you to stop until your brakes began taking hold? No? Well, it was 55 feet, more than the width of a city lot. It took you that long to react.”

It will help that itchy accelerator foot if he forms the habit of thinking of a car as a huge steel flywheel. The faster it goes, the more kinetic energy it builds up. The kinetic energy goes up as the square of the speed. It’s 25 times as great at 50 miles an hour as it is at 10. The only way that kinetic energy can be dissipated fast is with the brakes.

And here’s another valuable habit to formâ€”have him keep thinking of driving conditions. The trouble with most drivers is that they go too fast for conditions. Visibility, for instance. There may be fog, rain, or snow. Ever hear of a pilot taking his personal plane off the ground when the airport was fogged in? Okay, take a cue from people who fly airplanes. Even 10 miles an hour may be too fast under certain conditions.

Remember, teacher, you can’t do your job in one lesson. You are trying to form a habit. So short, frequent sessions are best. And watch yourself: don’t you get excited. Keep your voice deliberately low and calm.

As your pupil progresses, keep him at the wheel longer. Let him get confidence, but when he becomes over-confident, as he will, check him gently. Let him get away with two or three blunders. Then tell him.

That’s enough for today. Tell your student to turn around and head for home. Whoops! How about a signal for that turn? Remember, make it a habit!