More information at unpleasantdreams.com or Wikipedia. 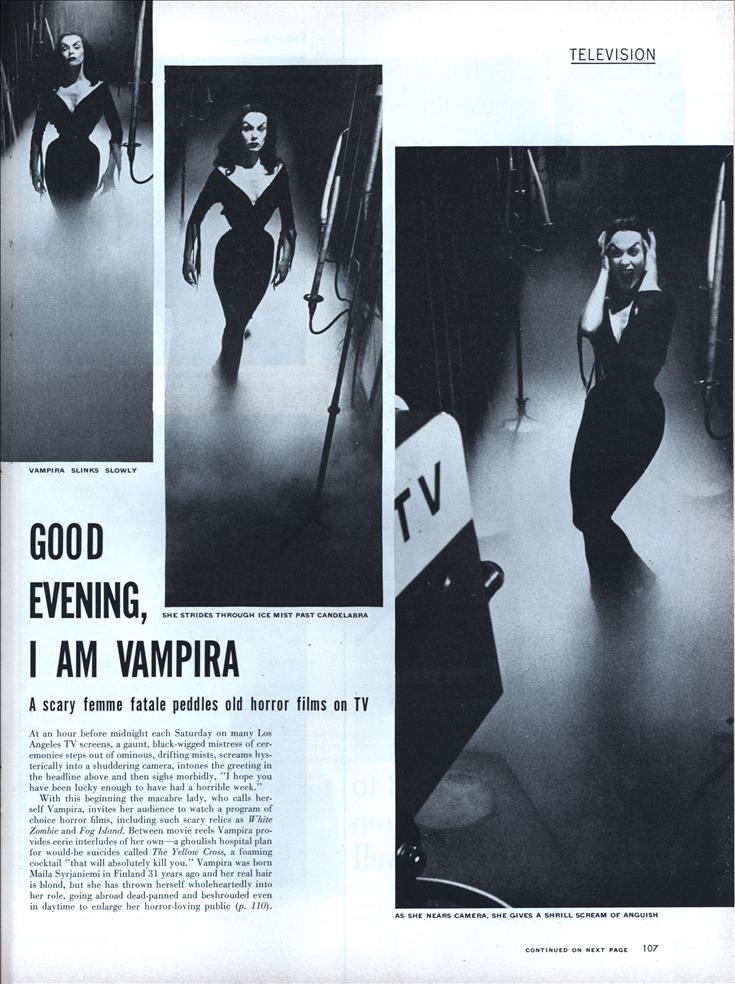 GOOD EVENING, I AM VAMPIRA

A scary femme fatale peddles old horror films on TV At an hour before midnight each Saturday on many Los Angeles TV screens, a gaunt, black-wigged mistress of ceremonies steps out of ominous, drifting mists, screams hysterically into a shuddering camera, intones the greeting in the headline above and then sighs morbidly, “I hope you have been lucky enough to have had a horrible week.”

With this beginning the macabre lady, who calls herself Vampira, invites her audience to watch a program of choice horror films, including such scary relics as White Zombie and Fog Island. Between movie reels Vampira provides eerie interludes of her own—a ghoulish hospital plan for would-be suicides called The Yellow Cross, a foaming cocktail “that will absolutely kill you.” Vampira was born Maila Syrjaniemi in Finland 31 years ago and her real hair is blond, but she has thrown herself wholeheartedly into her role, going abroad dead-panned and beshrouded even in daytime to enlarge her horror-loving public.

DEATH’S-HEAD SOFA is used as a perch when Vampira addresses TV audience. She boasts her fingernails are hemorrhage red.

ON TOUR of city Vampira sits regally in back of old Packard with chauffeur provided by TV station. She screams at stop lights.

HAUGHTY Vampira ignores people on the street. “I like them to stare if they know who I am” she admits, “but not if they don’t.”

HOPING FOR GLOOM, Vampira puts up umbrella on sunny day. She tells signature seekers, “I give, epitaphs not autographs.”