Science And Mechanics
Issue: Jun, 1959
Posted in: Computers, History
No Comments on Grandpa of Electronic Computers Built 125 Years Ago (Jun, 1959) 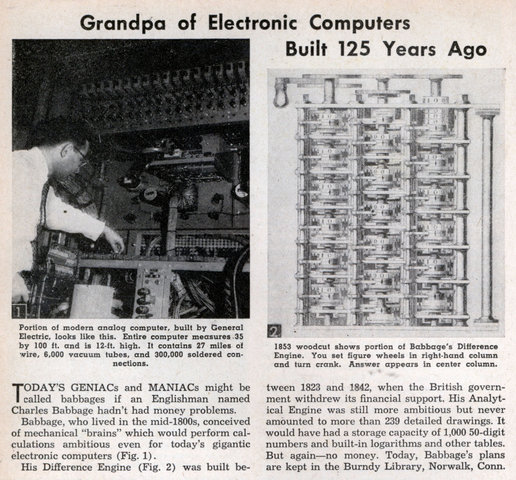 Grandpa of Electronic Computers Built 125 Years Ago
TODAY’S GENIACs and MANIACs might be called babbages if an Englishman named Charles Babbage hadn’t had money problems.

Babbage, who lived in the mid-1800s, conceived of mechanical “brains” which would perform calculations ambitious even for today’s gigantic electronic computers (Fig. 1).

His Difference Engine (Fig. 2) was built between 1823 and 1842, when the British government withdrew its financial support. His Analytical Engine was still more ambitious but never amounted to more than 239 detailed drawings. It would have had a storage capacity of 1,000 50-digit numbers and built-in logarithms and other tables.