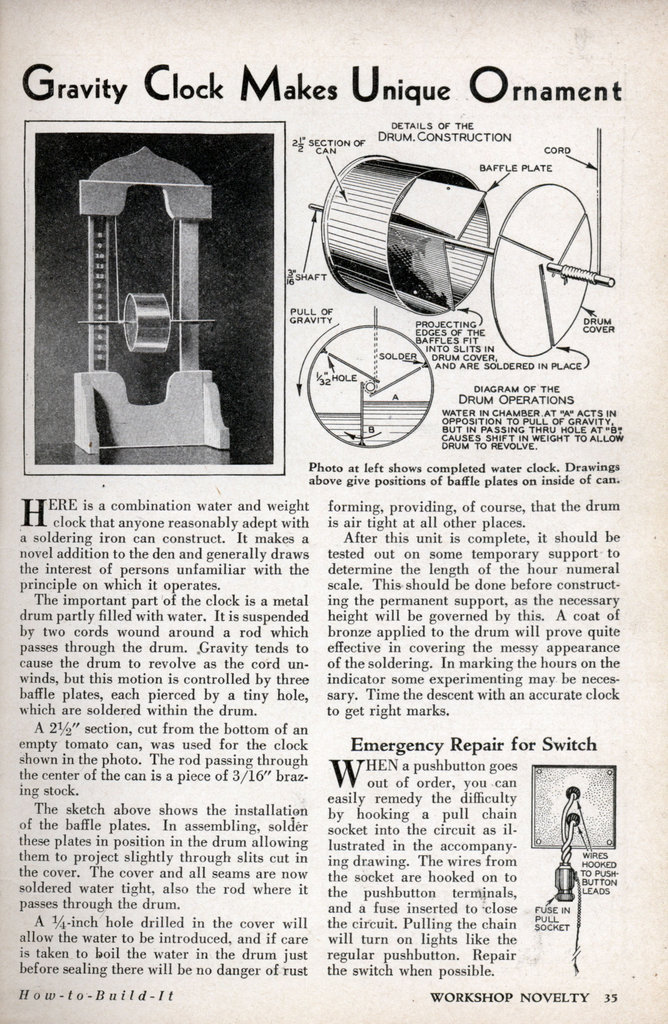 HERE is a combination water and weight clock that anyone reasonably adept with a soldering iron can construct. It makes a novel addition to the den and generally draws the interest of persons unfamiliar with the principle on which it operates.

The important part of the clock is a metal drum partly filled with water. It is suspended by two cords wound around a rod which passes through the drum. Gravity tends to cause the drum to revolve as the cord unwinds, but this motion is controlled by three baffle plates, each pierced by a tiny hole, which are soldered within the drum.

A 2-1/2″ section, cut from the bottom of an empty tomato can, was used for the clock shown in the photo. The rod passing through the center of the can is a piece of 3/16″ brazing stock.

The sketch above shows the installation of the baffle plates. In assembling, solder these plates in position in the drum allowing them to project slightly through slits cut in the cover. The cover and all seams are now soldered water tight, also the rod where it passes through the drum.

A 1/4-inch hole drilled in the cover will allow the water to be introduced, and if care is taken to boil the water in the drum just before sealing there will be no danger of rust forming, providing, of course, that the drum is air tight at all other places.

After this unit is complete, it should be tested out on some temporary support to determine the length of the hour numeral scale. This should be done before constructing the permanent support, as the necessary height will be governed by this. A coat of bronze applied to the drum will prove quite effective in covering the messy appearance of the soldering. In marking the hours on the indicator some experimenting may be necessary. Time the descent with an accurate clock to get right marks.