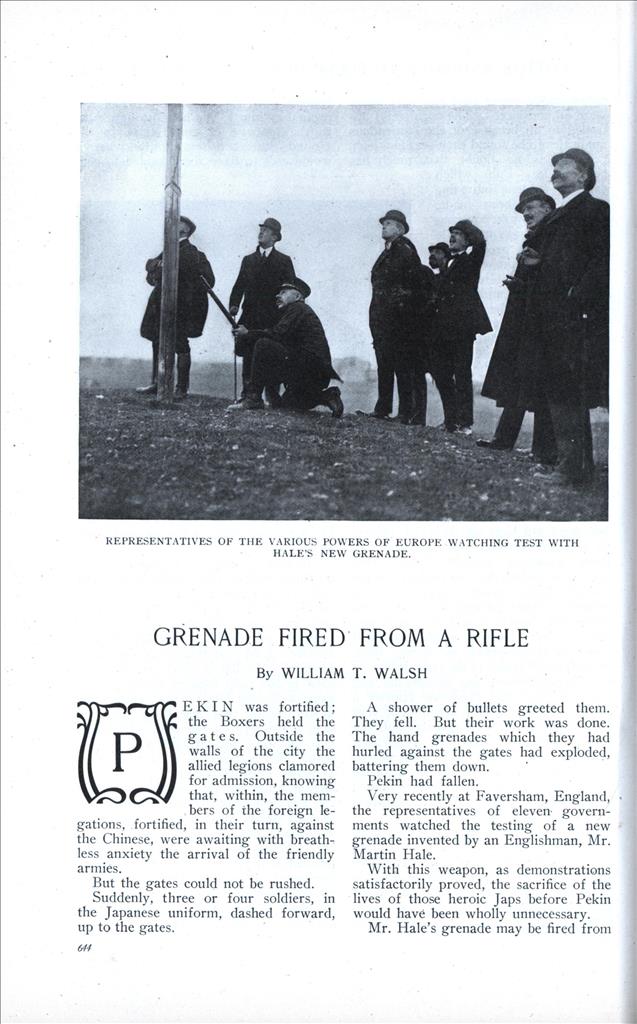 But the gates could not be rushed.

Suddenly, three or four soldiers, in the Japanese uniform, dashed forward, up to the gates.

A shower of bullets greeted them. They fell. But their work was done. The hand grenades which they had hurled against the gates had exploded, battering them down.

Very recently at Faversham, England, the representatives of eleven- governments watched the testing of a new grenade invented by an Englishman, Mr. Martin Hale.

With this weapon, as demonstrations satisfactorily proved, the sacrifice of the lives of those heroic Japs before Pekin would have been wholly unnecessary.

Mr. Hale’s grenade may be fired from a rifle. These advantages are therefore secured: power, distance and range, and safety for {he user. It is adaptable to the service rifle of the various nations, and is propelled with ordinary cartridges.

It may be fired from the shoulder or with the butt end of the rifle resting on the ground. The fire of the grenade does not in any way injure nor does it interfere with firing ball cartridges, nor in the use of the bayonet. It is capable of scattering twenty-four rectangular pieces of steel with jagged edges in all directions with great velocity. The concussion of the explosion would kill or stun any life within a wide radius. The grenades themselves weigh one pound six ounces, and six or eight may be carried 011 a waist belt without any inconvenience. The Japanese made good use of the hand grenades before Port Arthur.

In order to prove that a soldier carrying these grenades in the field was in no danger of being blown up by their accidental explosion, a bullet was fired at a loaded grenade. As will be seen from one of the photographs the bullet severely damaged the casing, but did not cause the grenade to explode.

Another of the photographs shows the safety pin. The grenade is perfectly harmless until this pin is drawn out. This, of course, is not clone until the last moment before firing. The tip of the grenade, it will be noticed, is surrounded by little oblong plates. It is the scattering of these small pieces of steel that causes the destruction of the object at which it is fired.

For future military operations there is no doubt the grenade will become part of the equipment for all combatants carrying small arms.