Oh joy. The birth of musak and the blue light special. 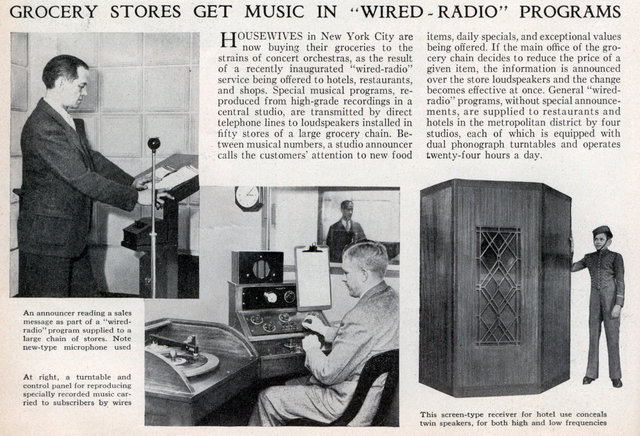 GROCERY STORES GET MUSIC IN “WIRED – RADIO” PROGRAMS
HOUSEWIVES in New York City are now buying their groceries to the strains of concert orchestras, as the result of a recently inaugurated “wired-radio” service being offered to hotels, restaurants, and shops. Special musical programs, reproduced from high-grade recordings in a central studio, are transmitted by direct telephone lines to loudspeakers installed in fifty stores of a large grocery chain. Between musical numbers, a studio announcer calls the customers’ attention to new food items, daily specials, and exceptional values being offered. If the main office of the grocery chain decides to reduce the price of a given item, the information is announced over the store loudspeakers and the change becomes effective at once. General “wired-radio” programs, without special announcements, are supplied to restaurants and hotels in the metropolitan district by four studios, each of which is equipped with dual phonograph turntables and operates twenty-four hours a day.