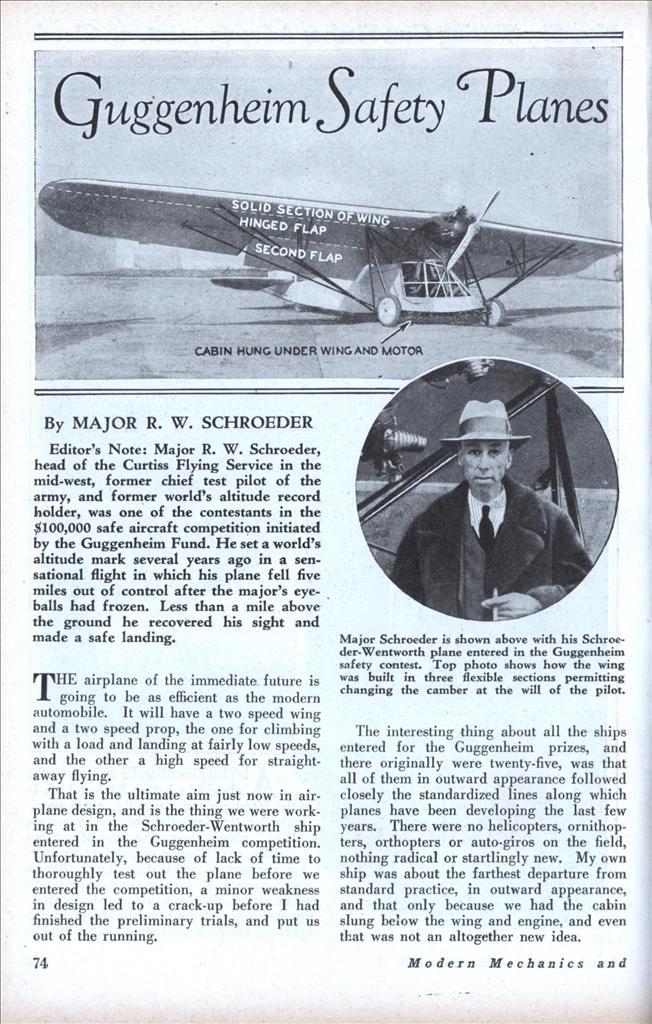 Editor’s Note: Major R. W. Schroeder, head of the Curtiss Flying Service in the mid-west, former chief test pilot of the army, and former world’s altitude record holder, was one of the contestants in the $100,000 safe aircraft competition initiated by the Guggenheim Fund. He set a world’s altitude mark several years ago in a sensational flight in which his plane fell five miles out of control after the major’s eyeballs had frozen. Less than a mile above the ground he recovered his sight and made a safe landing.

THE airplane of the immediate future is going to be as efficient as the modern automobile. It will have a two speed wing and a two speed prop, the one for climbing with a load and landing at fairly low speeds, and the other a high speed for straightaway flying.

That is the ultimate aim just now in airplane design, and is the thing we were working at in the Schroeder-Wentworth ship entered in the Guggenheim competition. Unfortunately, because of lack of time to thoroughly test out the plane before we entered the competition, a minor weakness in design led to a crack-up before I had finished the preliminary trials, and put us out of the running.

The interesting thing about all the ships entered for the Guggenheim prizes, and there originally were twenty-five, was that all of them in outward appearance followed closely the standardized lines along which planes have been developing the last few years. There were no helicopters, ornithopters, orthopters or auto-giros on the field, nothing radical or startlingly new. My own ship was about the farthest departure from standard practice, in outward appearance, and that only because we had the cabin slung below the wing and engine, and even that was not an altogether new idea.

The theory of the Handley-Page slot is that in a spin when one wing drops and reaches stalling speed the slot opens, while the upper and outer wing, traveling around a bigger circle at a higher speed, may be going so fast that the slot will remain closed, all of the added lift coming on the £ lower wing and bringing it back to normal.

With the single slot from wing tip to wing tip on the Curtiss the action is quite different, for the ship just won’t stall. I saw Col. Lindbergh take the Tanager up one day, pull the stick back until it was buried in his stomach, and hold it there while the ship dropped all the way to the ground. I thought from the way he pancaked it down he would wash out the land- ing gear, but he didn’t, and the ship rolled to a stop within forty feet.

In my own ship I was interested in two things, the wing of variable camber, in other words a two speed wing, and my variable pitch propeller. The crack-up which washed out the ship had nothing to do with either, but was the result of one of two faults in design, or possibly a combination of both.

The forward thirty percent of the top surface of the wing was built solid, the next forty percent was a hinged flap, and the rear thirty percent another flap, working on the first. Inside the fuselage we had rubber shock absorber cords to hold the flaps down, and an oil piston to regulate the speed of movement. At low speed the pull on the flaps would be greater than the tension of the rubber cords, and the flaps would rise, giving greater camber. As speed was picked up the pull decreased and the cords flattened out the wing surface for high speed travel. Each movement was limited by the amount of oil that could get through a small bypass around the piston.

The variable pitch propeller is entirely automatic in action. The trouble with most adjustable propellers in the past has been the force needed to overcome the centrifugal force which is tending to throw the blades out of the hubs. At full speed this force has been measured as something like seventeen tons. With moveable blades, and a seventeen-ton pressure against the bearings it took considerable leverage or reduction gearing to enable the pilot to move the blades at all. About the only way it could be accomplished was by throttling down, when the pressure would drop from seventeen tons, let us say, to seven tons.

In my propeller I take advantage of this drop in pressure to make it do the work. To change the pitch it is only necessary to throttle down, and then speed up again. It’s as simple as operating a chain pull light—you pull the cord and the light lights, you release it and nothing happens, pull again and the light goes out, and so on. Our cam arrangement is such that the first time you throttle down the pitch changes, you speed up and nothing happens, throttle again and the prop blades move, speed up and they stay fixed.

The result is you can set your prop at low pitch for the maximum of lift, to get your load off the ground. Because you have a low pitch, maximum lift prop, you can open up to full 1800 r.p.m. and climb your ship, instead of throttling down to 1500. When you reach your altitude you cut the gun for a moment, and then open up again. The blades have automatically been reset at high pitch to give you high speed. The relation of pitch to speed and tractive effort can be made clear by referring to a bolt. If you have a bolt with forty threads to the inch it advances slowly as you turn it, but a small amount of applied power will overcome great resistance. Another bolt with five threads to an inch will advance eight times as fast, but would require much more power to overcome resistance. With the plane the resistance falls away sharply after you have once got your speed and ceased climbing.

The twin problems of two speed wings and props, I believe, hold the solution of our principal flying troubles.

If we can build one ship that has a perfect weight lifting wing to get off the ground with maximum load, and a low pitch prop to do the job, and then, in the air, turn it into a high speed wing with a high speed prop, we have the ideal ship.

You remember the trouble Al Williams had with the Mercury racer he built in hopes of entering the Schneider cup contest? He couldn’t get it off the water. The trouble was that he had a high pitch prop, an ideal design for 350 miles an hour speed, but on the water he couldn’t get enough power out of it to overcome the drag of his pontoons. Instead of pushing the air back the broad, nearly flat blades were simply churning it around.