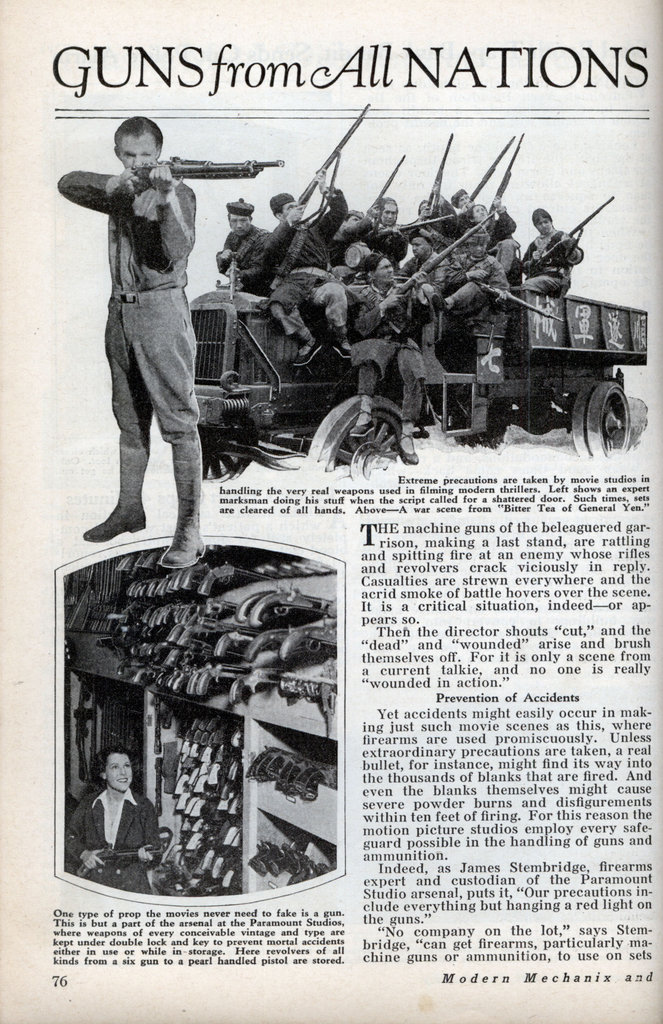 THE machine guns of the beleaguered garrison, making a last stand, are rattling and spitting fire at an enemy whose rifles and revolvers crack viciously in reply. Casualties are strewn everywhere and the acrid smoke of battle hovers over the scene. It is a critical situation, indeedâ€”or appears so.

Then the director shouts “cut,” and the “dead” and “wounded” arise and brush themselves off. For it is only a scene from a current talkie, and no one is really “wounded in action.”

Prevention of Accidents Yet accidents might easily occur in making just such movie scenes as this, where firearms are used promiscuously. Unless extraordinary precautions are taken, a real bullet, for instance, might find its way into the thousands of blanks that are fired. And even the blanks themselves might cause severe powder burns and disfigurements within ten feet of firing. For this reason the motion picture studios employ every safeguard possible in the handling of guns and ammunition.

Indeed, as James Stembridge, firearms expert and custodian of the Paramount Studio arsenal, puts it, “Our precautions include everything but hanging a red light on the guns.”

“No company on the lot,” says Stem-bridge, “can get firearms, particularly machine guns or ammunition, to use on sets without having a permit signed by the head property man. And no outside studio can rent guns from Paramount without a special permit from the State of California.

“We keep a record of each gun that goes out of this arsenalâ€”serial number, type, etc.â€”and we know every minute of the time it is in use just where we can put our hands on it.

“Our machine guns are kept in vaults and our ammunition in magazines under double lock and key. It is not only impossible for them to be stolen, but no careless person can tamper with them at any time.”

When the arsenal gets a properly signed order for guns and ammunition, the weapons are carefully examined by the firearms expert and then locked in boxes to which the head property man has the keys. These boxes are delivered to the set where the company is working. The blank ammunition is also delivered in separate lockers, thus blocking any chance of the guns being loaded by an unauthorized person.

Rehearsals are then gone through, and the scene made ready for actual filming. The head property man in the meantime has loaded the weapons which will figure in the sequence. There is a final pause, when the action side of the set is cleared for forty feet. Now the director signals “camera” and the firing begins. Care must be taken that the actors do not come too close to the guns in the heat of battle or serious burns may result. At the same time the action must not be repressed.

When the scene has been filmed the guns are once more collected and put back into boxes.

Real bullets are seldom fired on the set. Sometimes, however, the action calls for a door to be perforated, say, or bric-a-brac to be smashed. Then an expert marksman is called in to do the shooting. Actors and workers alike are cleared off the set so that there will be no possible chance of anyone being struck.

Convert Weapons to New Types “Incidentally,” says Stembridge, “the arsenal will not deliver ‘live’ ammunition to a company unless it can show a special order signed by the studio production manager.”

In battle scenes where great numbers of rifles are needed, a few, of course, may be dummy guns, unequipped to shoot even blanks. Nevertheless, they will be fashioned with extreme care to match the period in which the story action takes place.

On the other hand, “fireable” weapons are sometimes converted from one type of gun to anotherâ€”as for instance, a cartridge rifle to the old muzzle-loader of our fore-fathers.

A recent order of this kind, Stembridge said, called for’ more blunderbusses than the arsenal had on hand. They were to emit smoke exactly as the ancient weapons did, both from the end of the barrel and from the firing pan.

Get Guns From Germany Devising the bell-mouth was fairly easy; a small brass auto horn properly shaped and wired on every gun successfully achieved the effect. The firing end of the gun was more difficult. Here’s the way it was done: A small flash pan was fastened near the trigger. A hole in the breech allowed sparks from the exploding cartridge to ignite powder in the pan, giving a wisp of smoke.

It is seldom necessary to “fake” the wanted type of gun, since genuine firearms of every make, period and country are stored in the vault-like rooms of movie arsenals.

Of course, in huge war spectacles, where large numbers of troops are used, the resources of the movie gun-rooms “play out” and the studios have to go outside for additional firearms.

Universal’s “All Quiet On the Western Front,” for example, not only exhausted the arsenal’s stock, but utilized $30,000 worth of arms equipment bought in Germany especially for the picture. In addition, large numbers of guns were borrowed from American Legion Posts around Southern California. Every type of weapon, from giant howitzers to German automatic pistols, played their part in that great production.

During the vogue of gangster pictures, machine guns were used on nearly every stage, Stem-bridge says. And, of course, the ever-faithful Western always has plenty of gunplay.

Today, with war and adventure films popular, the use of firearms by the movie studios is probably even more general. Yet, because of the extreme care exercised in handling firearms and ammunition, no gun accident has ever occurred.