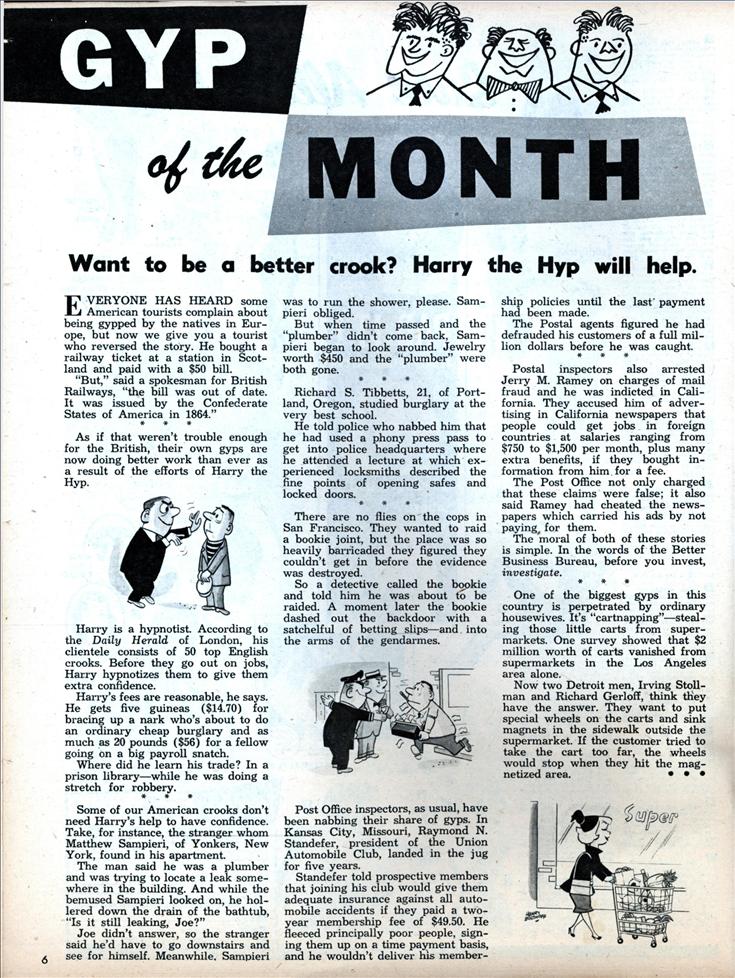 GYP of the MONTH

Want to be a better crook? Harry the Hyp will help.

EVERYONE HAS HEARD some American tourists complain about being gypped by the natives in Europe, but now we give you a tourist who reversed the story. He bought a railway ticket at a station in Scotland and paid with a $50 bill.

“But,” said a spokesman for British Railways, “the bill was out of date. It was issued by the Confederate States of America in 1864.”

As if that weren’t trouble enough for the British, their own gyps are now doing better work than ever as a result of the efforts of Harry the Hyp.

Harry is a hypnotist. According to the Daily Herald of London, his clientele consists of 50 top English crooks. Before they go out on jobs, Harry hypnotizes them to give them extra confidence.

Harry’s fees are reasonable, he says. He gets five guineas ($14.70) for bracing up a nark who’s about to do an ordinary cheap burglary and as much as 20 pounds ($56) for a fellow going on a big payroll snatch.

Where did he learn his trade? In a prison library—while he was doing a stretch for robbery.

Some of our American crooks don’t need Harry’s help to have confidence. Take, for instance, the stranger whom Matthew Sampieri, of Yonkers, New York, found in his apartment.

The man said he was a plumber and was trying to locate a leak somewhere in the building. And while the bemused Sampieri looked on, he hollered down the drain of the bathtub, “Is it still leaking, Joe?”

Joe didn’t answer, so the stranger said he’d have to go downstairs and see for himself. Meanwhile. Sampieri was to run the shower, please. Sampieri obliged.

He told police who nabbed him that he had used a phony press pass to get into police headquarters where he attended a lecture at which experienced locksmiths described the fine points of opening safes and locked doors.

There are no flies on the cops in San Francisco. They wanted to raid a bookie joint, but the place was so heavily barricaded they figured they couldn’t get in before the evidence was destroyed.

So a detective called the bookie and told him he was about to be raided. A moment later the bookie dashed out the backdoor with a satchelful of betting slips—and into the arms of the gendarmes.

Post Office inspectors, as usual, have been nabbing their share of gyps. In Kansas City, Missouri, Raymond N. Standefer, president of the Union Automobile Club, landed in the jug for five years.

Standefer told prospective members that joining his club would give them adequate insurance against all automobile accidents if they paid a two-year membership fee of $49.50. He fleeced principally poor people, signing them up on a time payment basis, and he wouldn’t deliver his member- ship policies until the last’ payment had been made.

The Postal agents figured he had defrauded his customers of a full million dollars before he was caught.

Postal inspectors also arrested Jerry M. Ramey on charges of mail fraud and he was indicted in California. They accused him of advertising in California newspapers that people could get jobs in foreign countries at salaries ranging from $750 to $1,500 per month, plus many extra benefits, if they bought information from him for a fee.

The Post Office not only charged that these claims were false; it also said Ramey had cheated the newspapers which carried his ads by not paying, for them.

The moral of both of these stories is simple. In the words of the Better Business Bureau, before you invest, investigate.

One of the biggest gyps in this country is perpetrated by ordinary housewives. It’s “cartnapping”—stealing those little carts from supermarkets. One survey showed that $2 million worth of carts vanished from supermarkets in the Los Angeles area alone.

Now two Detroit men, Irving Stollman and Richard Gerloff, think they have the answer. They want to put special wheels on the carts and sink magnets in the sidewalk outside the supermarket. If the customer tried to take the cart too far, the wheels would stop when they hit the magnetized area.
• • •