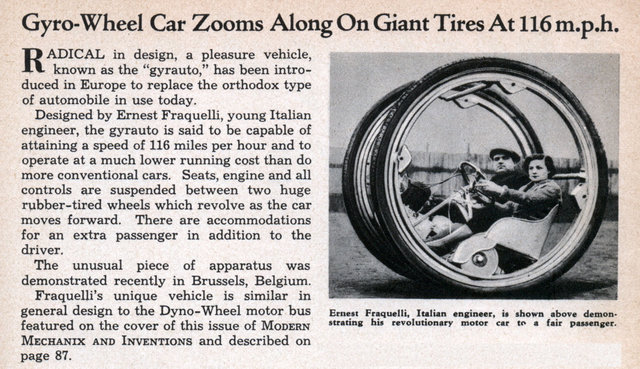 Gyro-Wheel Car Zooms Along On Giant Tires At 116 m.p.h.

RADICAL in design, a pleasure vehicle, known as the “gyrauto,” has been introduced in Europe to replace the orthodox type of automobile in use today.

Designed by Ernest Fraquelli, young Italian engineer, the gyrauto is said to be capable of attaining a speed of 116 miles per hour and to operate at a much lower running cost than do more conventional cars. Seats, engine and all controls are suspended between two huge rubber-tired wheels which revolve as the car moves forward. There are accommodations for an extra passenger in addition to the driver.

The unusual piece of apparatus was demonstrated recently in Brussels, Belgium.
Fraquelli’s unique vehicle is similar in general design to the Dyno-Wheel motor bus featured on the cover of this issue of Modern Mechanix and Inventions and described on page 87.