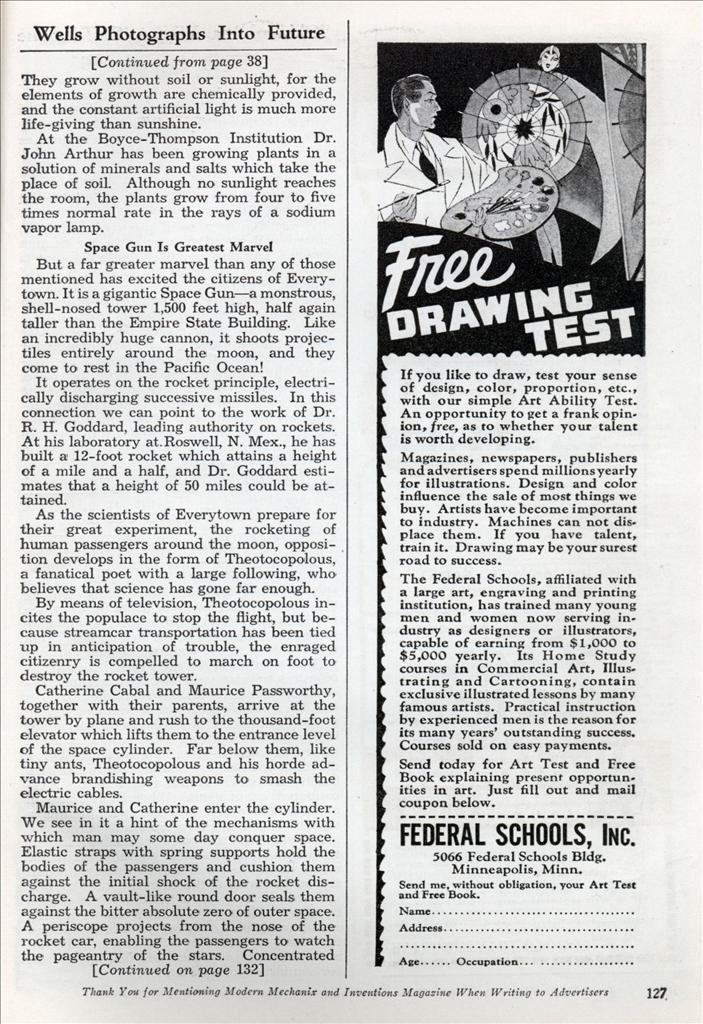 Not the least convincing fact about Mr. Wells’ vision of the future is the clean-cut way in which he eliminates what he calls scientific “balderdash.” Tomorrow’s world will be a triumph of science and the machine, to be sure. But there will be no robot men; machines will not rise like Frankensteins to slay their creators.

Such fantastic touches as these often adorn the prophecies of less able scientists than H. G. Wells. But in “Things to Come” we have painted for us an astonishing picture in which there is not a single development which does not follow naturally out of laboratory discoveries of our own day. It is inspiring for us folk of 1936 to realize that the progress of science, as presented each month in the pages of Modern Mechanix & Inventions, is laying the foundation for a new civilization.

“Things to Come” begins in 1940, only four years away. Without warning, bombing planes appear suddenly over the city of Everytown, symbolic of every other city in the world. It is Christmas Eve. Out of the black night comes the soul-shattering terror of the bombs, rending skyscrapers to kindling, blowing people to atoms. Deadly new gases sweep through the ruined city, choking out the lives of men and women and children, proving that there will be no non-combatants in the next war.

Frightful as the dramatized bombing appears, it is no exaggeration. Since the last aerial bombing on a large scale in 1918, an amazing increase in efficiency has been demonstrated by the fighting planes of the world. The destruction wrought by Zeppelins and bombers during the World War was trivial when contrasted with the tremendous destructive power of modern air forces.

Despite almost complete destruction, Everytown hurls every fiber of its strength against the enemy. Soon there comes a new horrorâ€”the shells of the enemy spread the germs of a strange disease, the Wandering Sickness. People stricken by it wander blindly for hours until they die. Water and food supplies are contaminated. Doctors can devise no cure for it, for all laboratories, all means of research have been destroyed.

This weird disease could be similar in form to the invisible plant disease virus which Dr. W. M. Stanley of the Rockefeller Institute for Medical Research succeeded in crystallizing recently. A few crystals of this substance dissolved in the city water supply would leave scarcely a resident alive.

By 1970 the endless warfare has reduced the world to a state of barbarism.

Nations have ceased to exist. In their place are communities like Everytown, dominated by local war-lords fighting with their neighbors. The people of Everytown live under the thumb of The Boss.

In this desolate scene of havoc a miracle occurs one day. A strange airplane with queer, swallow-like wings descends in Everytown. The pilot is John Cabal, an
aviator who lived in Everytown before the war.

The Boss eagerly demands to know if he can buy planes and gasoline to fight to a “victorious peace,” but Cabal shakes his head. His government helps no one to wage war. The Boss angrily orders him thrown into a cell, where, some hours later, Richard Gordon finds him. Gordon is an old friend of Cabal’s, and with the latter’s directions Gordon gets gasoline from Cabal’s plane, patches an old ship and manages to escape to Basra.

The throb of powerful motors heralds Gordon’s return with a squadron of bombing planes. The Boss is terrified, but he has a hostage! He ties Cabal in the middle of the square where the invaders must see him. In spite of this, the bombs begin to fall. They thud to earth and burst with harmless “plops,” but nothing seems to happen. Then, slowly, the Boss and his soldiers and all the citizens of Everytown fall asleep. For the bombs of the airmen are not designed to kill. They release the gas of Peace, a powerful anesthetic.

Thus, in 1970, the soldiers of science begin to build the world anew. And what a world!

We see it next in 2054. An age of enormous mechanical and industrial energy has followed world peace. Flying over the new Everytown, one might be completely unaware of its existence. There are no skyscrapers; they have vanished with the decadent age of steel. The new Everytown is dug into the hillide. It is constructed not of metal and rivets, but by chemistry. Liquids bubbling in giant retorts and are poured into moulding machines. They emerge as great slabs, perfectly insulated, immensely strong, which are welded together into walls. Cities are built out of test tubes; the carpenter, bricklayer, and steelworker have long been relegated to the discard.

Already manufacturers of prefabricated houses in our world are accomplishing feats comparable to this, and architects and builders are expecting even more radical changes within the next year or so. The ceiling of the room curves over us gently; it seems as limitless as the canopy of the sky.

Standing in this room in the heart of the subterranean city, we can see miles and miles of landscape in the world outside. We see clouds where the ceiling should be. Rippling lakes, flower gardens, waving trees move majestically across the walls, giving a three-dimensional effect of vast distance. Mr. Wells lets us in on a secret. It is a moving frieze which is projected on the walls. It makes the tiniest room seem as vast as all outdoors. Many motion picture theaters of today employ this medium for making their auditoriums seem larger. In place of a ceiling they have what appears to be a blue sky filled with stars and drifting clouds of light. As yet, however, the infinite possibilities of this type of mural decoration have been scarcely touched upon.

All furniture is made entirely of glass and metal. Flowers are growing in glass vases about the room. They are like no flowers ever seen beforeâ€”strange, gorgeously beautiful new blossoms, the creations of botanists.

They grow without soil or sunlight, for the elements of growth are chemically provided, and the constant artificial light is much more life-giving than sunshine.

At the Boyce-Thompson Institution Dr. John Arthur has been growing plants in a solution of minerals and salts which take the place of soil. Although no sunlight reaches the room, the plants grow from four to five times normal rate in the rays of a sodium vapor lamp.

But a far greater marvel than any of those mentioned has excited the citizens of Everytown. It is a gigantic Space Gunâ€”a monstrous, shell-nosed tower 1,500 feet high, half again taller than the Empire State Building. Like an incredibly huge cannon, it shoots projectiles entirely around the moon, and they come to rest in the Pacific Ocean!

It operates on the rocket principle, electrically discharging successive missiles. In this connection we can point to the work of Dr. R. H. Goddard, leading authority on rockets. At his laboratory at.Roswell, N. Mex., he has built a 12-foot rocket which attains a height of a mile and a half, and Dr. Goddard estimates that a height of 50 miles could be attained.

As the scientists of Every town prepare for their great experiment, the rocketing of human passengers around the moon, opposition develops in the form of Theotocopolous, a fanatical poet with a large following, who believes that science has gone far enough.

By means of television, Theotocopolous incites the populace to stop the flight, but because streamcar transportation has been tied up in anticipation of trouble, the enraged citizenry is compelled to march on foot to destroy the rocket tower.

Catherine Cabal and Maurice Passworthy, together with their parents, arrive at the tower by plane and rush to the thousand-foot elevator which lifts them to the entrance level of the space cylinder. Far below them, like tiny ants, Theotocopolous and his horde advance brandishing weapons to smash the electric cables.

Maurice and Catherine enter the cylinder. We see in it a hint of the mechanisms with which man may some day conquer space. Elastic straps with spring supports hold the bodies of the passengers and cushion them against the initial shock of the rocket discharge. A vault-like round door seals them against the bitter absolute zero of outer space. A periscope projects from the nose of the rocket car, enabling the passengers to watch the pageantry of the stars. Concentrated foods are stocked, and a chemical atmosphere is manufactured within the chamber.

In an observatory high above Everytown, Cabal and Sir Raymond stand staring at a great telescope mirror, similar to the 200-inch mirror to be installed at Mt. Wilson. A tiny streak of moving light marks the trail their children are blazing in history.

“For man, no rest and no ending,” says Cabal, the scientist incarnate. “He must go onâ€”conquest beyond conquest. All the universeâ€”or nothingness. Which shall be it, Pass worthy?”

Like the sombre voice of Fate from some illimitable bourne comes the echo: “Which shall it be?”

And on that note of query our master guide, H. G. Wells, ends his inspiring vision. He is content to leave us with a picture of science and invention marching to their resistless ends, as they are marching as you read these words. Marching with such accellerated swiftness as to make his world of 2054 a too-conservative promise of wonders yet to come!