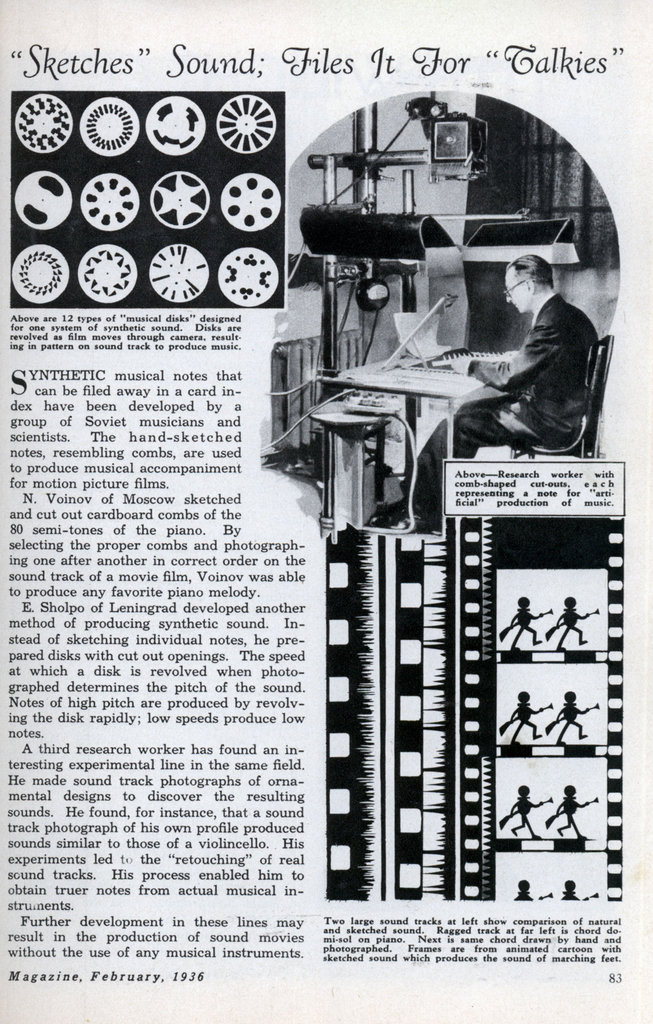 “Sketches” Sound; Files It For “Talkies”

SYNTHETIC musical notes that can be filed away in a card index have been developed by a group of Soviet musicians and scientists. The hand-sketched notes, resembling combs, are used to produce musical accompaniment for motion picture films.

N. Voinov of Moscow sketched and cut out cardboard combs of the 80 semi-tones of the piano. By selecting the proper combs and photographing one after another in correct order on the sound track of a movie film, Voinov was able to produce any favorite piano melody.
E. Sholpo of Leningrad developed another method of producing synthetic sound. Instead of sketching individual notes, he prepared disks with cut out openings. The speed at which a disk is revolved when photographed determines the pitch of the sound. Notes of high pitch are produced by revolving the disk rapidly; low speeds produce low notes.

A third research worker has found an interesting experimental line in the same field.

He made sound track photographs of ornamental designs to discover the resulting sounds. He found, for instance, that a sound track photograph of his own profile produced sounds similar to those of a violincello. His experiments led ti the “retouching” of real sound tracks. His process enabled him to obtain truer notes from actual musical instruments.

Further development in these lines may result in the production of sound movies without the use of any musical instruments.