Popular Science
Issue: May, 1936
Posted in: House and Home
Tags: housewife aids
3 Comments on Handy Aids for the Homemaker (May, 1936)

I would love to see an infomercial for the 3-in-1 Iron/Stovetop/Curling Iron. What do you think it would be called? 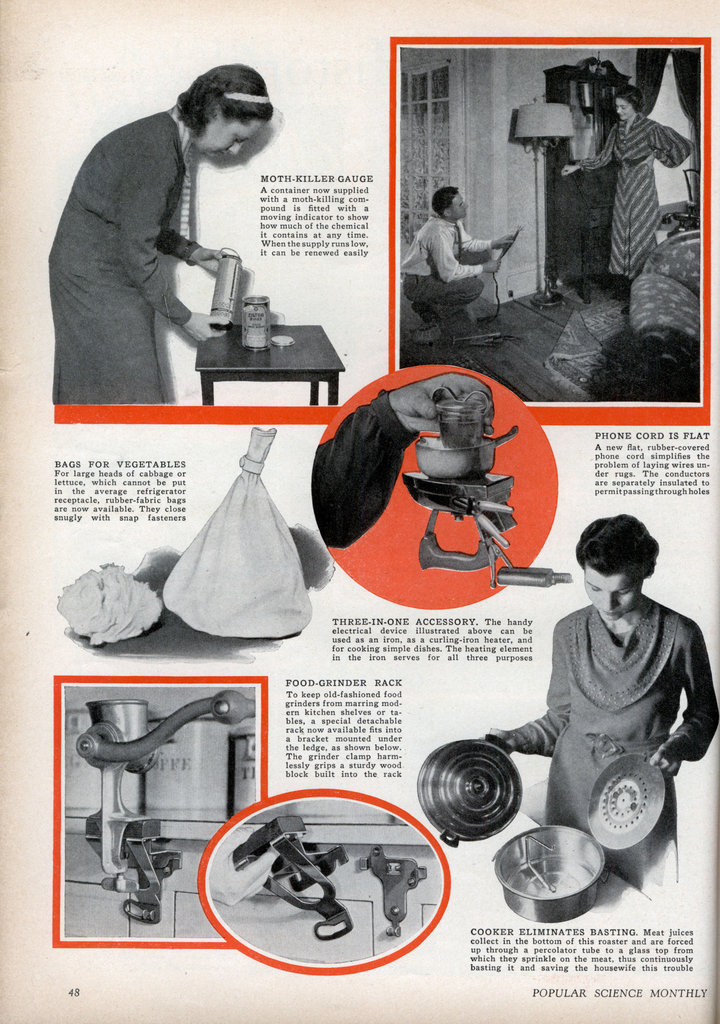 Handy Aids for the Homemaker

MOTH-KILLER GAUGE
A container now supplied with a moth-killing compound is fitted with a moving indicator to show how much of the chemical it contains at any time. When the supply runs low, it can be renewed easily

BAGS FOR VEGETABLES
For large heads of cabbage or lettuce, which cannot be put in the average refrigerator receptacle, rubber-fabric bags are now available. They close snugly with snap fasteners

FOOD-GRINDER RACK
To keep old-fashioned food grinders from marring modern kitchen shelves or tables, a special detachable rack now available fits into a bracket mounted under the ledge, as shown below. The grinder clamp harmlessly grips a sturdy woodblock built into the rack

THREE-IN-ONE ACCESSORY
The handy electrical device illustrated above can be used as an iron, as a curling-iron heater, and for cooking simple dishes. The heating element in the iron serves for all three purposes

PHONE CORD IS FLAT
A new flat, rubber-covered phone cord simplifies the problem of laying wires under rugs. The conductors are separately insulated to permit passing through holes

COOKER ELIMINATES BASTING
Meat juices collect in the bottom of this roaster and are forced up through a percolator tube to a glass top from which they sprinkle on the meat, thus continuously basting it and saving the housewife this trouble

MUSICAL SHOWER CURTAIN
For the benefit of bathroom baritones and tub tenors, shower curtains are now supplied with a suitable musical selection printed upon them. The words are of a humorous character, and the musical notes are interspersed with amusing drawings. The curtains are made of a rubberized fabric

OPENS BOTTLES BY SQUEEZING
When the gargoyle beak of a new bottle opener is placed over a bottle cap, and the curved handle is squeezed against the bottle neck, the cap comes off easily without flying

SECTIONAL BRUSH
Made in sections, each of which consists of a separate row of bristles, the brush shown at the left is readily taken apart for cleaning or replacement. The sections are held together by a frame

SANITARY BOTTLE
Made of heat-resisting glass and marked with a graduated scale, this bottle can be used for measuring and boiling water or milk, and will keep formulas sterile

SOAP GRINDER
Odd pieces of soap, which usually go to waste, can be reclaimed by means of the hand mill illustrated at the left. Screwed to the wall and operated with a crank, it turns soap into powder for dishwashing or laundry

SHOWS REFRIGERATOR TEMPERATURE
Set in a recess in a tray of an electric refrigerator, this tiny thermometer shows at a glance the temperature of the food compartment. The scale is divided clearly into three critical zones