Popular Science
Issue: Jan, 1938
Posted in: House and Home
No Comments on Handy Aids for the Household (Jan, 1938) 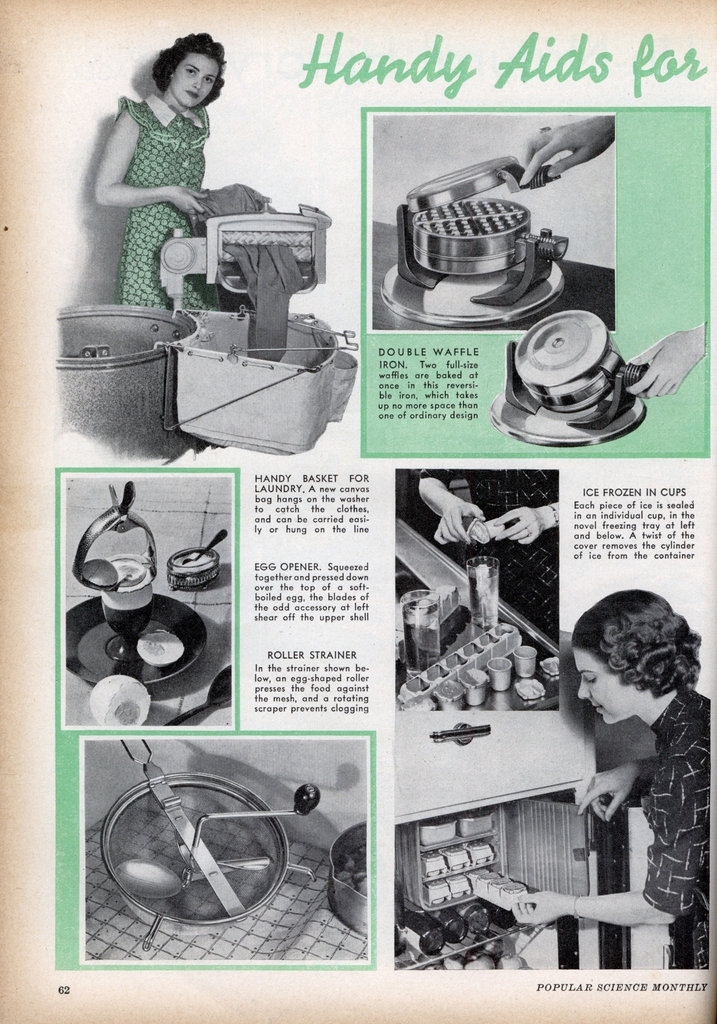 Handy Aids for the Household

HANDY BASKET FOR LAUNDRY
A new canvas bag hangs on the washer to catch the clothes, and can be carried easily or hung on the line

EGG OPENER
Squeezed together and pressed down over the top of a soft-boiled egg, the blades of the odd accessory at left shear off the upper shell

ROLLER STRAINER
In the strainer shown below, an egg-shaped roller presses the food against the mesh, and a rotating scraper prevents clogging

DOUBLE WAFFLE IRON
Two full-size waffles are baked at once in this reversible iron, which takes up no more space than one of ordinary design

ICE FROZEN IN CUPS
Each piece of ice is sealed in an individual cup, in the novel freezing tray at left and below. A twist of the cover removes the cylinder of ice from the container

SUGAR DISPENSER
When tilled, the bowl at the right pours out the equivalent of a teaspoonful of sugar. To sprinkle the sugar, the bowl can be shaken

JAR OPENER AND SEALER
Screw-top food containers are opened and resealed easily with the new kitchen fixture shown below. A quick-acting cushioned vise grips the cap, while the jar is turned. It also lifts ordinary bottle caps

AUTOMATIC WASHER
When clothes are put into the washer seen at left, above, and two dials are set, the machine will automatically wash them, rinse three times, and wring damp dry

DOUGHNUT MOLD
In the mold shown above, three doughnuts can be cooked simultaneously over an open flame. Since no grease is used, the food is easy to digest