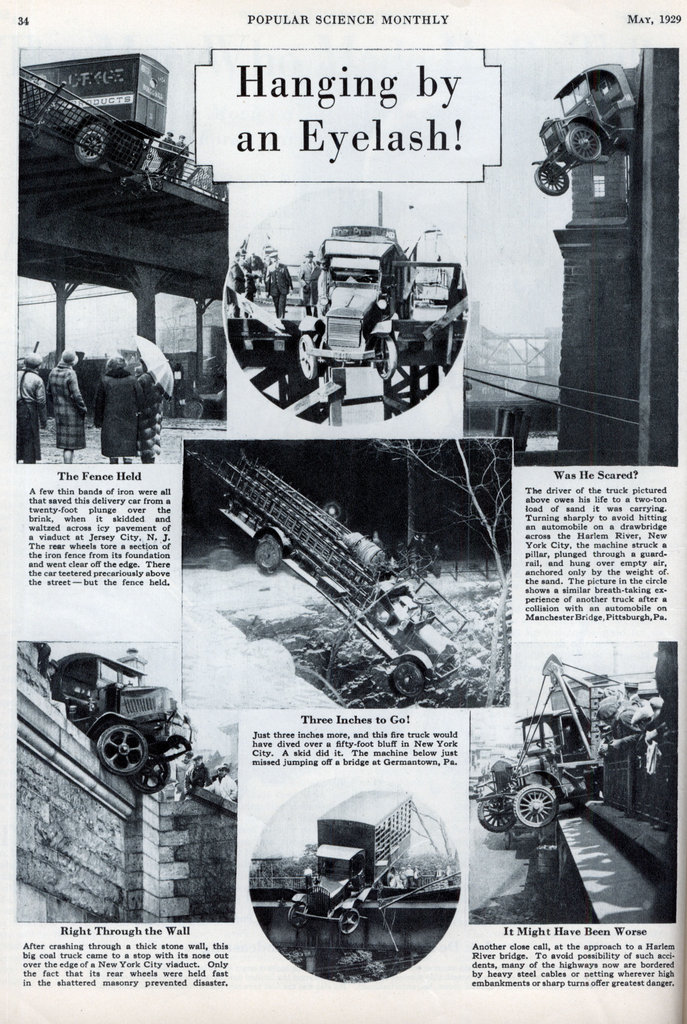 Hanging by an Eyelash!

The Fence Held A few thin bands of iron were all that saved this delivery car from a twenty-foot plunge over the brink, when it skidded and waltzed across icy pavement of a viaduct at Jersey City, N. J. The rear wheels tore a section of the iron fence from its foundation and went clear off the edge. There the car teetered precariously above the street — but the fence held.

Right Through the Wall After crashing through a thick stone wall, this big coal truck came to a stop with its nose out over the edge of a New York City viaduct. Only the fact that its rear wheels were held fast in the shattered masonry prevented disaster.

Just three inches more, and this fire truck would have dived over a fifty-foot bluff in New York City. A skid did it. The machine below just missed jumping off a bridge at Germantown, Pa.

The driver of the truck pictured above owes his life to a two-ton load of sand it was carrying. Turning sharply to avoid hitting an automobile on a drawbridge across the Harlem River, New York City, the machine struck a pillar, plunged through a guardrail, and hung over empty air, anchored only by the weight of. the sand. The picture in the circle shows a similar breath-taking experience of another truck after a collision with an automobile on Manchester Bridge, Pittsburgh, Pa, It Might Have Been Worse Another close call, at the approach to a Harlem River bridge. To avoid possibility of such accidents, many of the highways now are bordered by heavy steel cables or netting wherever high embankments or sharp turns offer greatest danger.