Everyone laughed and said it couldn’t be done. Well, they laughed at Einstien and Newton too! Now the world is blessed with the Kazooica, erm the Harmazoo? Harzooica? 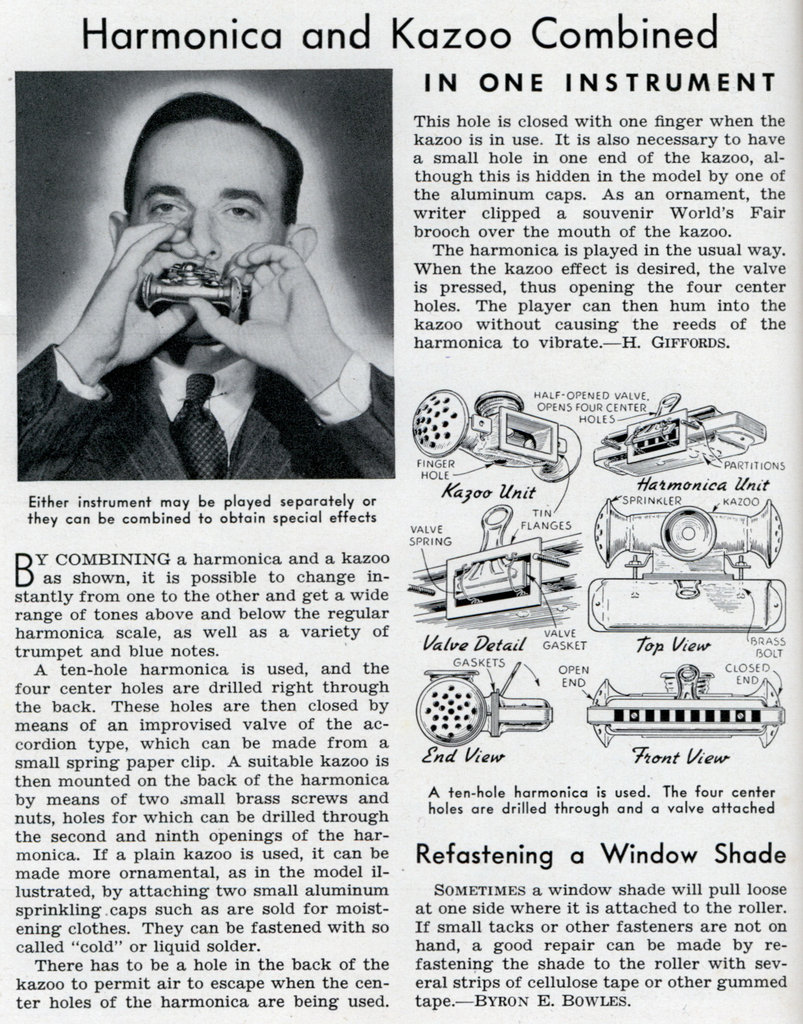 BY COMBINING a harmonica and a kazoo as shown, it is possible to change instantly from one to the other and get a wide range of tones above and below the regular harmonica scale, as well as a variety of trumpet and blue notes.

A ten-hole harmonica is used, and the four center holes are drilled right through the back. These holes are then closed by means of an improvised valve of the accordion type, which can be made from a small spring paper clip. A suitable kazoo is then mounted on the back of the harmonica by means of two .small brass screws and nuts, holes for which can be drilled through the second and ninth openings of the harmonica. If a plain kazoo is used, it can be made more ornamental, as in the model illustrated, by attaching two small aluminum sprinkling caps such as are sold for moistening clothes. They can be fastened with so called “cold” or liquid solder.

There has to be a hole in the back of the kazoo to permit air to escape when the center holes of the harmonica are being used.

This hole is closed with one finger when the kazoo is in use. It is also necessary to have a small hole in one end of the kazoo, although this is hidden in the model by one of the aluminum caps. As an ornament, the writer clipped a souvenir World’s Fair brooch over the mouth of the kazoo.

The harmonica is played in the usual way. When the kazoo effect is desired, the valve is pressed, thus opening the four center holes. The player can then hum into the kazoo without causing the reeds of the harmonica to vibrate. â€”H. Giffords.