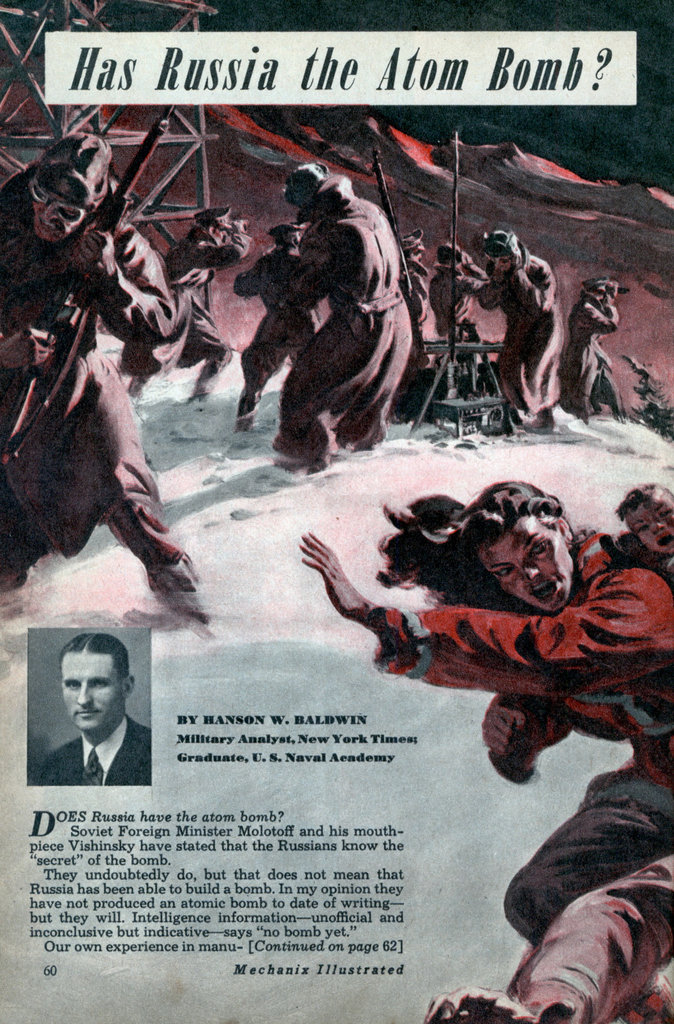 There is no real scientific secret to the atomic bomb. There has been no such secret since before the war, certainly none since Hiroshima proved theory practical. Therefore Molotoff’s statement that Russia “knows the secret” is a simple propaganda device.

There are, however, a great many technical and engineering and production secretsâ€”hundreds of them. Even the relatively simple Hanford plutonium plant required in its construction the services of hundreds of subcontractors. This one plant required a cross section of American industry, and devices hitherto unknown to man. Production “know-how,” industrial genius and technical and mechanical ability are not an American monopoly. But no other nation possesses these attributes to the same extent that we do. Industrially, Russia is still a backward nation compared to us.

There are other factors which limit Russia’s atomic capabilities. Oneâ€”though less important than it once appearedâ€”is power. Most of the world’s great power plants are in North America. Another is availability of raw materials, particularly of the primary material â€” uranium. Russia has enough to produce a small number of bombs, but her limited stockpile of uranium ore is inadequate for any large number. By far the greater part of the world’s known sources of uraniumâ€”including the rich resources of the Belgian Congoâ€”are available to us, but not to Russia.

All these things mean to our keenest observers that Russia does not have a bomb today. She probably has completed, or is about to complete, however, one or more small atomic piles. Best estimates of her “A-Day”â€”the day when she will get her first experimental bombâ€”range between 1950 and 1957. Some few think it will take her longer than this. Majority opinion indicates that the United States will retain its quantitative lead in bomb production for a very considerable periodâ€”perhaps until the 1960’s or 1970’s, perhaps indefinitelyâ€”and that it will take Russia a decade or more to acquire a stockpile of even a score or two of bombs.

When Russia gets her first bomb, can we tell?

The nature of the atomic bomb is such that a nation trying to manufacture it for the first time cannot be sure of success unless a test bomb is exploded. She is likely to choose a rather remote area for this test.

She will probably choose somewhere in Siberia or in the midst of the Eurasian “heartland,” or perhaps in the Arctic area far from border observation. She can almost certainly prevent visual evidence of the test leaking to the outside world.

Contrary to general impression no seismograph in the world is sensitive enough to record an atomic explosion, unless it is within 200 or 300 miles of the blast. The force of an atomic explosion is minute compared to even a mild earth tremor, and very little of the bomb’s explosive force is transmitted to the earth’s crust.

The microbarograph, an instrument which records small changes in air pressure, is probably as useless as the seismograph for this purpose. At great distances from the scene of the explosion it would show nothing.

Electroscopes, which measure radioactivity in the atmosphere, seem to offer more promise. The radioactive fission products from a test bomb would be caught up in the air currents, might be carried in the upper atmosphere for thousands of miles and perhaps could be measurable outside the borders of Russia. But these particles are dissipated rapidly and the vagaries of air currents make the utility of electroscopes as detecting devices completely unpredictable.

We shall not be able to tell, therefore, as soon as Russia’s first atomic bomb is explodedâ€”unless Russia wants us to know. But we shall know after a time lag when Russia has the bomb. Secrets of this nature cannot be kept forever. The amount of uranium and other raw materials required, some of which must come from outside Russia’s borders, and the great size of the physical installations necessary will, in time, reveal her possession of the bomb.

Are we helping Russia get the bomb?

We have been exporting small amounts of machinery, industrial and transportation equipment and manufactured goods to Russia since the war. These exports undoubtedly strengthen a little the vast and complicated industrial establishment that must be behind any production of the atomic bomb. We have also allowed the Russians to learn and “export” some of our general production and technical “know-how”â€”mass production techniques, factory management.

We have been receiving from Russia in return for our manufactured exports raw materials. Three of these, manganese, chrome and platinum, are listed by the armed services as “strategic” or scarce and unavailable in sufficient amounts within our borders.

Russian manganese is particularly important to us. We get some manganese from U. S. worked mines in Cuba. There are large but undeveloped supplies in Brazil. Normal sources in India and Africa have been disrupted in postwar years because of railroad transportation and political problems. We need badly the manganese Russia is sending us until such time as alternate sources can be developed.

In fact, at the moment, we need Russian raw materials more than Russia needs the few American manufactured goods we are sending her. We should, however, cease giving the Russians free access to our technical “know-how” unless we are to receive some equivalent value in return. The very slight and slow help to the Russian industrial structure given by our present exports of machinery will have to be risked for a time, for we gain more by reciprocal trade with Russia than we lose.

Does Russia have the “carriers” to transport the bomb to American targets?

The day of the intercontinental missile, or ‘ of the supersonic transoceanic piloted plane is still a long way off.

Russia has some copies of our B-29, but not many of them. She has some German jet planes. She has the German V-2 type rocket and new type German submarines. German experts and technicians are working in Russia on the development of all these “carriers.” But the work is still in the research and development stage; the danger is long-term, not short-term.

Today, we have a far greater industrial potential and a far stronger power position than Russia. We have bases overseas near Russia, and Russia has none near us. We have “carriers” that can reach Russia from our overseas bases. Russia has no “carriers” that can reach us from her home territory. We have the atomic bomb; Russia doesn’t. For all these reasons Russia is not likely to start a war in the near future.

All the answers to the preceding questions have indicated clearly, however, that Russia will someday have the atomic bomb and the carriers to transport it to this country.

The supporters of a “preventive” war assume, erroneously, I believe, that we have enough atomic bombs now to insure our quick and easy victory. This is wrong. The Russian armies would overrun Europe. The war might be long and hard.

In defeating Russia we would destroy the values in Europe which we are now trying to save by the Marshall plan. That continent already is weary and war-torn. Another war now would almost certainly finish it and would undoubtedly eliminate our friends. We would solve nothing. The eventual outcome, even after we had won a long hard war, would be worse chaos than now exists.

Those who believe in “preventive” war make another false assumption. They regard a future war with Russia as “inevitable.” That is a strong word. No man can predict the future. Stalin will certainly die in the next decade or so, and there may be a “palace” struggle for power to determine his successor. Internal pressures in Russia may force changes in external Russian policy. However, should war come a quarter century hence, the fear of retaliation might prevent use of the atomic bomb and other mass weapons of destructionâ€”even if no satisfactory system of control has been worked out.